Eimeria spp is a protozoan parasite with a complex life cycle and so is the host immune response to Eimeria infection. In the last decade, huge progress has been made in the identification of host and parasite genes involved in immunogenicity but there are still some immunity mechanisms to be discovered.

As a general rule, we say that Eimeria immunity is species-specific, meaning that each species of Eimeria is able to stimulate protective immunity against itself. Although some studies suggest that partial cross-protection can be achieved (Augustine et al. 1991), from a practical perspective we have to assume the widely accepted belief that there is no cross-protection between species.

The role of antibodies is negligible in the immune response to Eimeria spp despite being abundantly synthesized after contact with the parasite, whilst the role of cell-mediated immunity is vital. This fact has been described in several studies where the removal of the bursa of Fabricius did not interfere with the development of immunity against Eimeria (Lillehoj et al. 1988).

Eimeria infection will induce an inflammatory reaction in the intestine that will start with the secretion of mucin by the goblet cells to build up a physical barrier in an attempt to minimize the invasion of epithelial cells by the sporozoites.

Other mechanisms of the innate immune response will be activated following exposure to the sporozoites. Macrophages, dendritic cells (DCs) and natural killer cells (NK) will be mediators in this primary non-specific immune response. Macrophages are phagocytes with cytotoxic activity that produce cytokines which mediate in the inflammatory response. DCs are also components of the mononuclear phagocyte system which express high levels of major histocompatibility complex class II (MHC II) and they are the main antigen presenting cells to T helper cells during the primary immune response. NK cells are non-phagocytic cells with cytotoxic effect that will lyse infected enterocytes. Chickens don’t have lymph nodes so it’s likely that primary antigen processing occurs in the mucosal-associated lymphoid tissue of the gut (GALT).

Avian GALT includes the bursa of Fabricius, the caecal tonsils, Meckel´s diverticulum, Peyer patches and intraepithelial lymphocytes. CD4+ T cells recognize antigen peptides displayed by MHC class II molecules. CD 4+ T cell activation by DCs triggers their differentiation along two pathways: CD4+ Th 1 lymphocytes that secrete IL-2, IFN-g and TNF b providing support to cytotoxic T cells (CD8+), and CD4+ Th 2 that mainly secrete IL-4, IL-5 and IL-13 and essentially provide support to B Lymphocytes. In subsequent Eimeria infections, an adaptative immune response will take over from a non-specific immune response and cytotoxic T cells (CD 8+) will play the major role in controlling the infection. The main determinant of differentiation of CD4+ T cells towards the Th 1 or Th 2 pathways is the extent and type of DC activation by the innate system.

Specific adjuvants may favour CD4+ responses to Th 1 or Th 2. HIPRAMUNE® T is an adjuvant that, applied together with EVALON® vaccine, skews the CD4+ response towards the Th 1 pathway, increasing the secretion of IL-2 and IFN-gamma and consequently the CD8+ T cell differentiation. 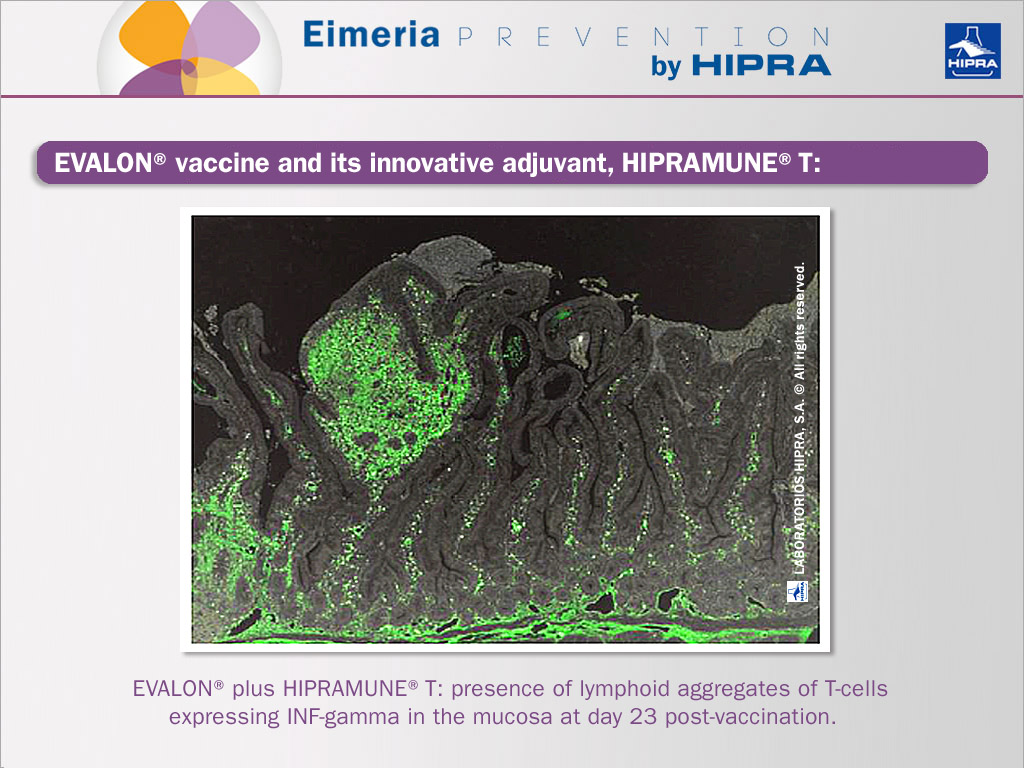 Nowadays live vaccines are the only alternative to anticoccidial drugs as an effective coccidiosis control measure. A large number of oocysts is generally required to generate a good immune response so the use of attenuated Eimeria lines in a vaccine is crucial to avoid the problems associated with non-attenuated lines.

In the development of a live attenuated vaccine against avian coccidiosis for long-life cycle chickens we have to pay special attention to Eimeria necatrix. This species is one of the most pathogenic, schizogony occurs in the lamina propria and crypts of Lieberkühn of the midgut causing extensive haemorrhage, so achieving a good level of immunity after vaccination is essential. On the other hand, Eimeria necatrix produces a low number of oocysts per cycle so the initial dose delivered in the vaccine should be high to assure sufficient replication. As a result, we need a very well balanced attenuated line that lacks the pathogenicity of the parent strain but keeps enough reproductive potential to retain its immunogenicity.

Three methods of attenuation to produce a live attenuated Eimeria line are known: by serial passage of the parasite in the choriallantoic membrane (CAM) of embryonated eggs, by gamma irradiation, or by selection for precocious development. In the literature we can find papers on Eimeria necatrix attenuated lines produced by serial passage in CAM and attenuated lines produced by selection for precocious development as candidates for inclusion in a live vaccine against coccidiosis. Shirley in 1980 described an attenuated line of E. necatrix produced by passage in CAM. Later on, in 1984, Shirley et al. found that attenuation of virulence in their line was not genetically stable. The line produced after 29 passages in CAM became highly pathogenic after only six consecutive passages in chickens.

Other studies showed the trait of attenuation to be stable in precocious lines of Eimeria tenella, E. acervulina and E. praecox so in 1984 the Shirley’s group attempted to develop an Eimeria necatrix line attenuated by selection for precociousness. They used the Houghton (H) strain of E. necatrix as the parent strain and several precocious lines with different generations of selection, 20, 25 and 30 generations, derived from the H strain. They checked body weights and intestinal coccidiosis gross lesions to test the pathogenicity of the different lines. To check the reproductive potential they measured the output of oocysts from chickens given different doses of oocyst of the different lines. And to check the immunogenicity, birds inoculated with different doses of the different lines were challenged 15 days after the primary inoculation.

The results showed that despite a marked attenuation of virulence, the precocious lines retained much of the immunogenicity of the parent strain. These studies support the idea that precocious lines are preferable to egg-adapted lines for production of live attenuated vaccines against avian coccidiosis.

New strategies for the control of coccidiosis in poultry: rotation programmes with vaccines against Eimeria