New strategies for the control of coccidiosis in poultry: rotation programmes with vaccines against Eimeria

From the very beginnings of this type of animal production, control of digestive diseases in the poultry industry has been one of the most significant health challenges. Moreover, among digestive diseases, coccidiosis in poultry continues to pose a challenge for the poultry farming worldwide. The incorporation of new tools provides new resources for safe and effective control. 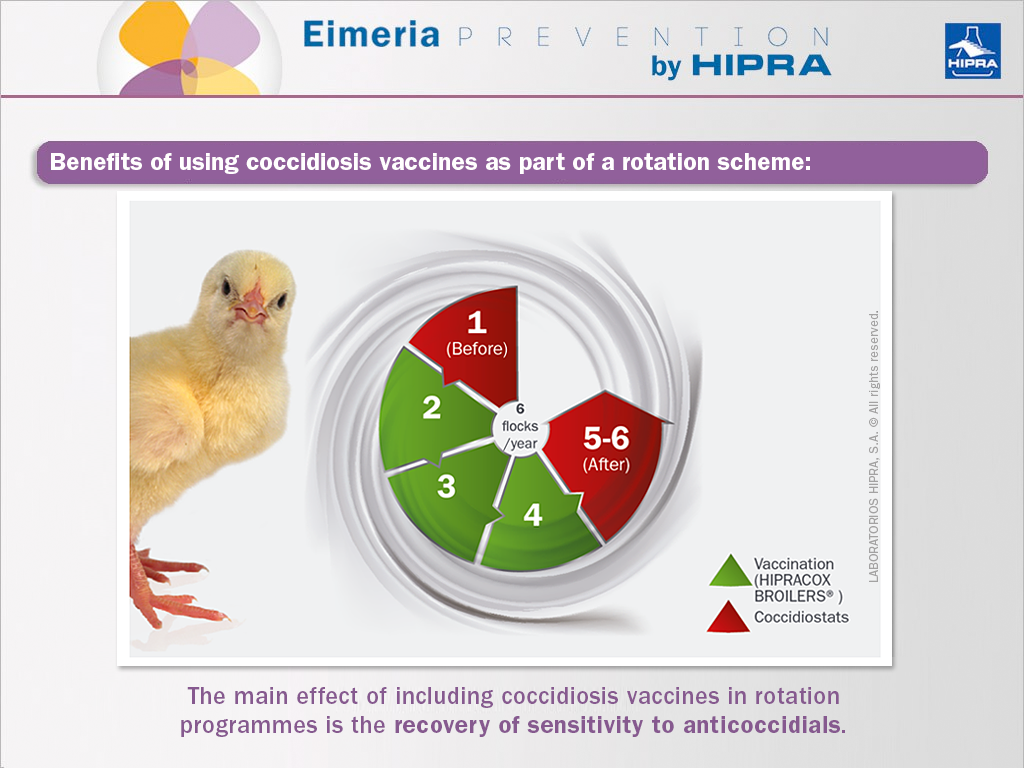 Where are we coming from?

The housing conditions of birds used in production constitute a trigger factor for digestive diseases, with coccidiosis in poultry being one of the most prevalent, caused by parasites of the Eimeria genus.

From the very beginnings of industrial poultry farming, controlling coccidiosis in poultry has been largely based on the use of so-called coccidiostats or anticoccidial drugs. According to Chapman (2001), in the USA 99% of industrial operations involving broiler chickens between 1995 and 1999 used anticoccidial drugs. This figure currently stands at between 60 and 99% of operations, depending on the time of year (Chapman, unpublished observations). One consequence of this widespread use of anticoccidial drugs has been the development of resistances, which have been documented against all drugs and in all areas where poultry production takes place under industrial conditions (Chapman, 1997). The poultry industry has handled resistance-related problems through medication schemes that are commonly known as “shuttle” and “rotation”. These administration patterns involve different types of drugs (ionophores and chemicals) and have been able to delay the development of resistances, although most Eimeria isolates show varying levels of resistance to more than one drug (Chapman, 1997; Peek and Landman, 2003).

Where are we headed?

In the wake of vaccines against avian coccidiosis, a new tool has been introduced in control programmes against coccidiosis in poultry. The use of vaccines as part of a rotation scheme (alternating vaccinated cycles with cycles with traditional anticoccidial programmes) has revealed an improvement in sensitivity to anticoccidial drugs used prior to the introduction of the vaccines (Chapman and Jeffers, 2015; Mathis and Broussard, 2006; Peek and Landman, 2006; Dardi et al., 2015).

The main effect of including vaccines against coccidiosis in poultry in rotation programmes is the recovery of sensitivity to anticoccidials. This was shown by Dardi et al. (2015), who used the McDougald et al. (1986) method to assess the percentage by which gut lesions had been reduced (Johnson & Reid, 1970) in comparison to the unmedicated and infected group. Accordingly, after the first vaccination cycle, the parasites present at the vaccinated farm revealed already an improved sensitivity to anticoccidials: 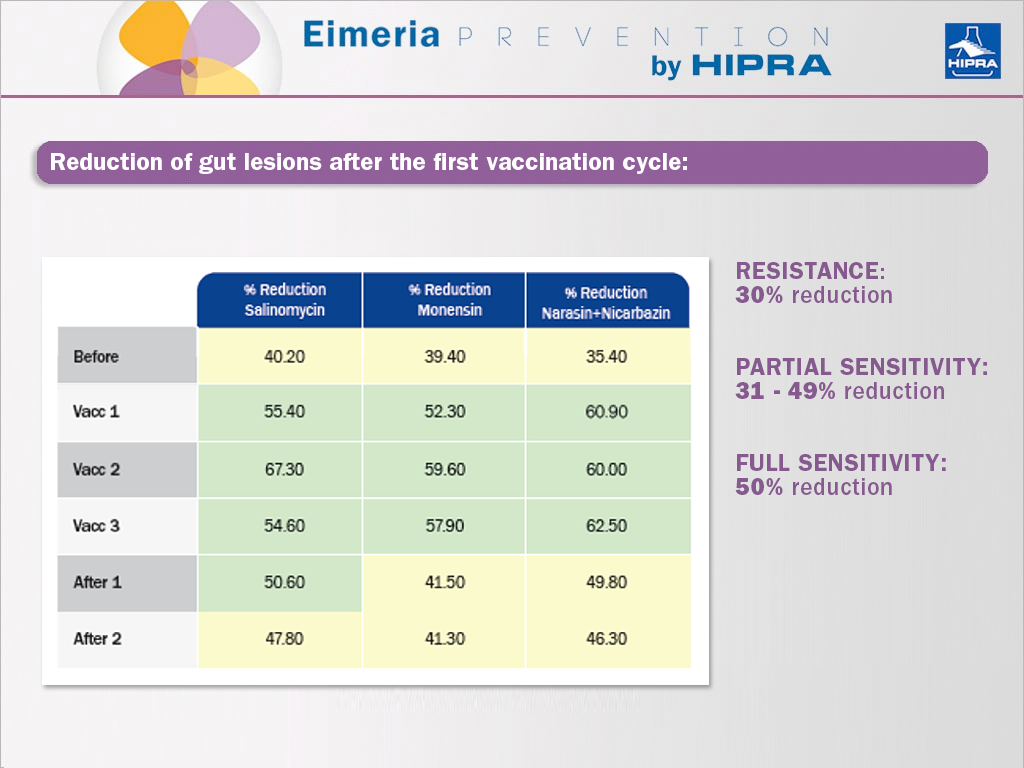 This effect is justified based on:

Strategy for using vaccines against coccidiosis in poultry

Introducing precocious attenuated vaccines such as HIPRACOX® in rotation programmes for the control of coccidiosis in poultry is no longer complicated or difficult to implement as we now have access to massive spray application systems for chickens. The rotation programmes that include these vaccines may follow a scheme such as the one proposed by Chapman and Jeffers (2014) for broiler chickens in the US. If yearly chicken production cycles are six, an anticoccidial program is used for the first two flocks (January to April), then litter is removed (cleanout) to reduce the resident Eimeria population. Afterward, a vaccine containing sensitive strains is used for two flocks (May to August) to repopulate the house and finally from September to December (two flocks) a different anticoccidial programme is used.

Alternatively, there are schemes based on the incorporation of precocious attenuated vaccines such as HIPRACOX®, for which there are no strict guidelines regarding periods of the year when to use the vaccine or litter handling, for markets such as Europe where litter recycling is prohibited.

Rotation programmes with vaccines against coccidiosis in poultry currently represent a new strategy which may ensure a better long-term response to coccidiosis control, as well as improved production results due to the implementation of precocious attenuated vaccines within the control scheme against the Eimeria parasite.

Contribution of DNA-based diagnostic methods to the treatment of coccidiosis in poultry. What's New?

Contribution of DNA-based diagnostic methods to the treatment of coccidiosis in poultry. What's New?