Can an attenuated vaccine for coccidiosis in chickens increase profitability? Results on farms in Brazil

In Brazil, the use of vaccines to control coccidiosis in chickens is still uncommon, mainly because of a series of false beliefs or “myths” that spread over time. These false beliefs are mostly due to the experience that some companies have had in the past when using non-attenuated-type vaccines, thus severely injuring the intestinal wall, leading to a loss in performance. 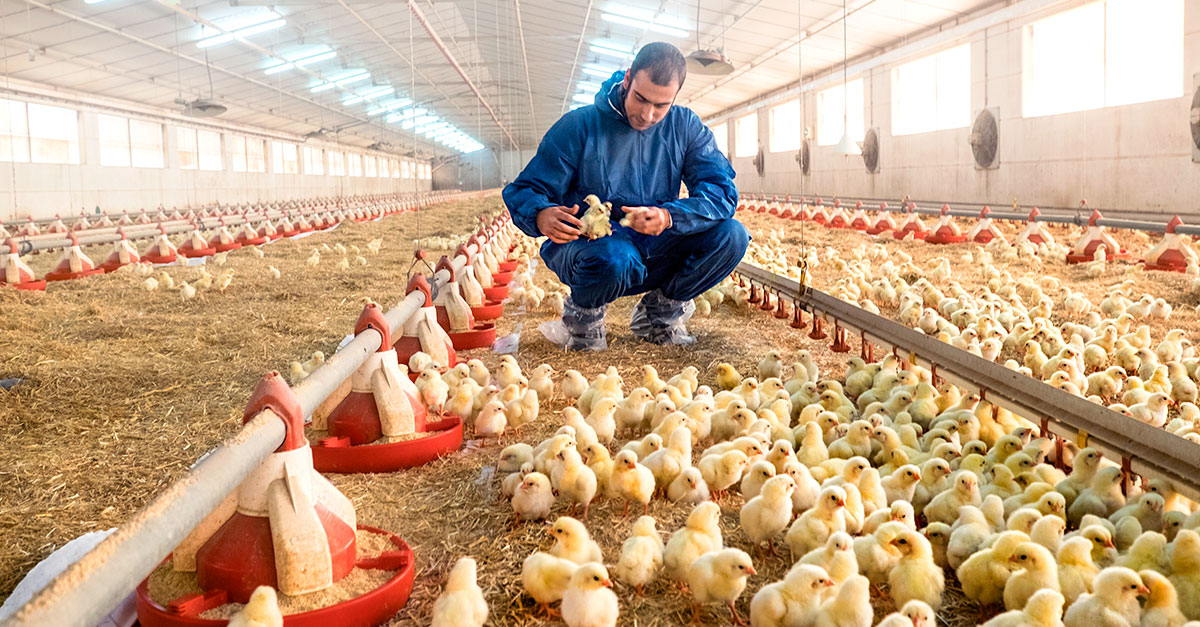 The importance of controlling coccidiosis in chickens in Brasil is undeniable due to the great financial losses caused by the disease, either in its clinical or subclinical form.

Coccidiosis in chickens in Brasil: What’s the situation?

The subclinical disease causes numerous damages that may be imperceptible, given that they are often masked by other factors that occur on the farm.

According to Doug Korver, in the 20th South Brazil Poultry Farming Symposium, besides the reduction in feed consumption, the bird experiences muscle degradation to compensate for the low absorption of amino acids due to intestinal injuries.

Historically, coccidiosis in chickens has been controlled by most companies with the use of anticoccidial agents.

However, it can be observed that the degree of resistance of field Eimeria spp. to most molecules is increasing, as well as drawbacks such as the use of Nicarbazin, which has a negative effect on the zootechnical results proportional to the dose used, including in some cases accompanied by slight losses, given that it interferes with the circulatory system, increasing cardiac output (Donzele et al. 2001).

In Brazil, nowadays there are also vaccines for coccidiosis in chickens that contain all precocious attenuated Eimeria spp. strains.

This allows replication to occur earlier and less intensely. Consequently, damage to the intestinal wall is minimal and does not result in a loss in performance.

We are talking about coccidiosis vaccines like HIPRACOX®, which contains 5 precocious attenuated species of Eimeria spp. (E. acervulina, E.maxima, E. mitis, E. praecox and E. tenella), developed to be administered by spraying in the hatchery or upon arrival of the birds to the farm on the first day of life of the chicks.

A good control method using vaccines for coccidiosis in chickens should offer both the options for continuous or rotational use.

Over the last year some companies in Brazil decided to incorporate the vaccine for coccidiosis in chickens into their control programmes.

These companies are generating a large volume of results under normal field conditions, which therefore represent the reality of Brazilian poultry farming.

Results of the use of a vaccine for coccidiosis in chickens in Brazil: Company 1

The first company used Hipracox® and two more vaccines for coccidiosis in chickens made up of non-attenuated strains found on the Brazilian market for two consecutive cycles.

Please find below the comparative table of feed conversions: 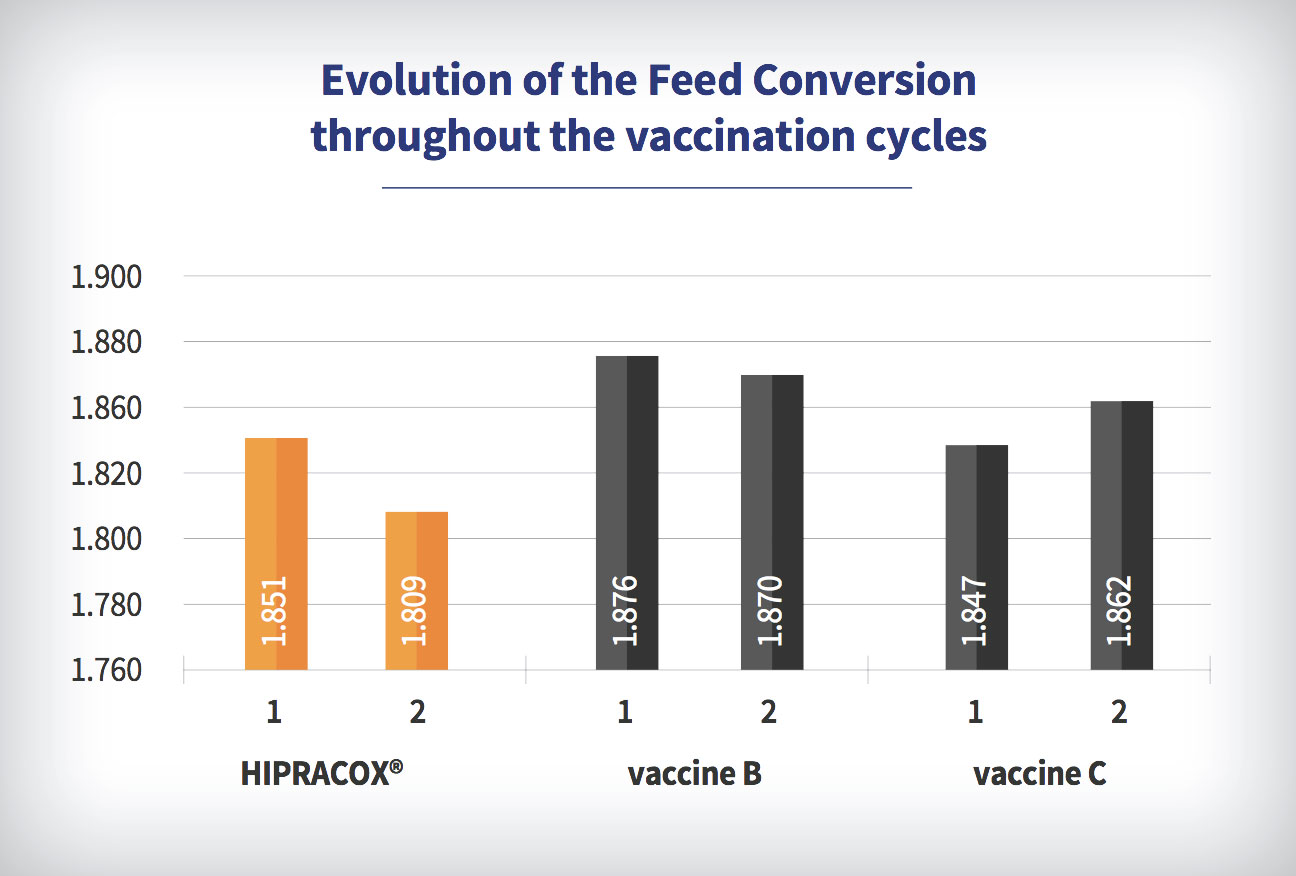 The adjusted feed conversion graph (3350 g) shows the evolution of each vaccine from cycle 1 to cycle 2, and Hipracox® was the vaccine that obtained the best overall feed conversion ratio (FCR) result and also the best FCR gain from one cycle to another.

It is important to note that each company has its own nutritional level, always aiming for maximum performance at the lowest cost, which influences the FCR index.

What is expected from a vaccine for coccidiosis in chickens is that with each vaccination cycle the zootechnical result improves as a result of the replacement of field resistant oocysts with drug-sensitive vaccine oocysts in the litter.

The table below shows the capability each vaccine showed to improve feed conversion (3350 g adjusted) from cycle 1 to cycle 2.

It is important to point out the 42- grams improvement in FCR in the 2nd cycle with Hipracox®, in the same cycle vaccine B showed an improvement of only 7 grams and vaccine C resulted in a 15 grams reduction in FCR.

Still, with regard to Feed Conversion Ratio, the table below compares Hipracox® with vaccines B and C, in cycle 1 and cycle 2.

Hipracox® in cycle 2 proved to be 53 grams better than vaccine C. Compared to vaccine B, Hipracox® outperformed it by 25 grams in the 1st cycle and 61 grams in the 2nd vaccination cycle.

The table below shows the comparison of mortality rates among the three vaccines for coccidiosis in chickens tested.

Hipracox® showed the lowest mortalities and a clear evolution between cycles: 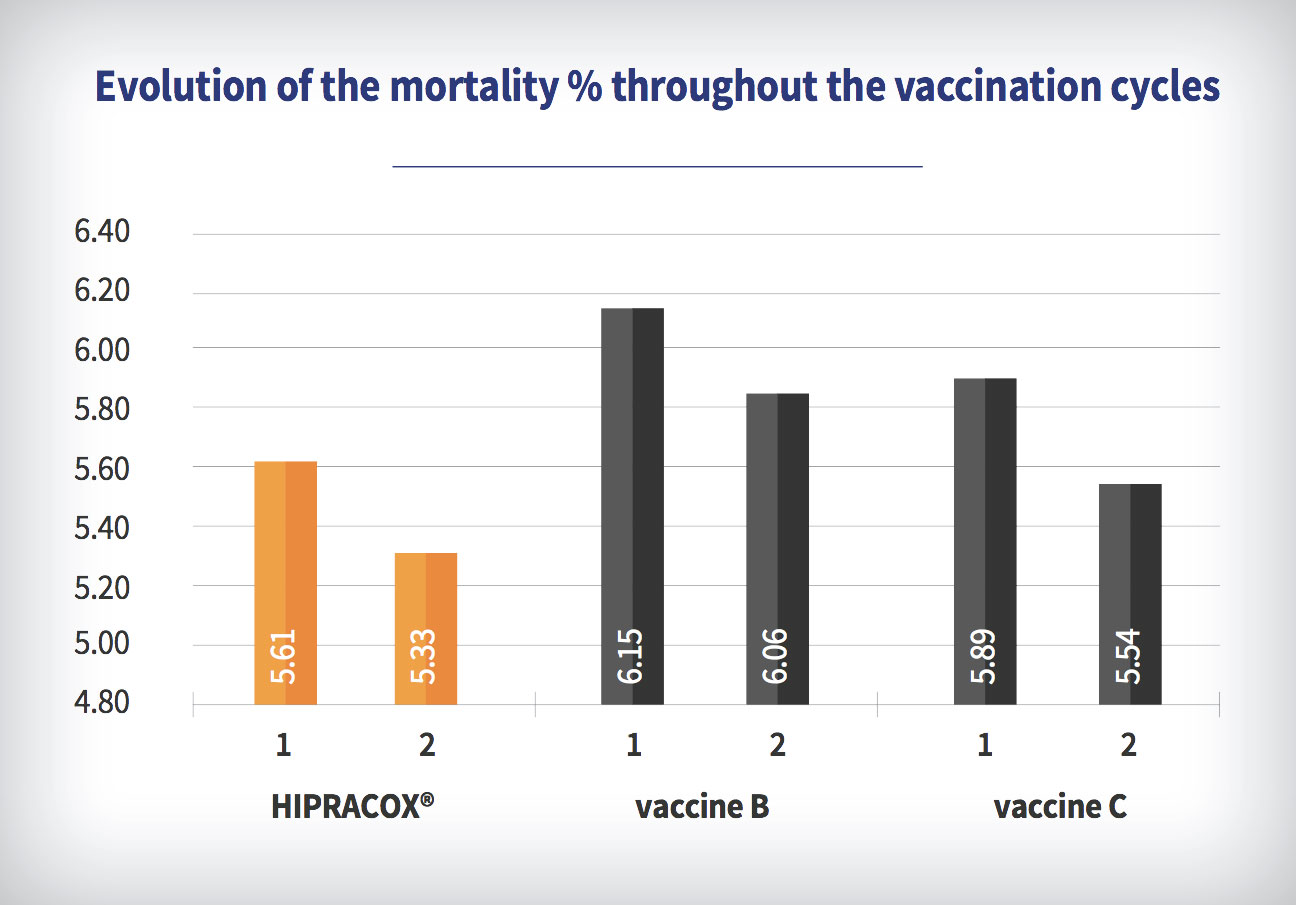 The table below shows the comparison of Production Efficiency Factor (PEF) among the three vaccines for coccidiosis in chickens.

Once again, the data showed that the flocks vaccinated with Hipracox® produced the best results: 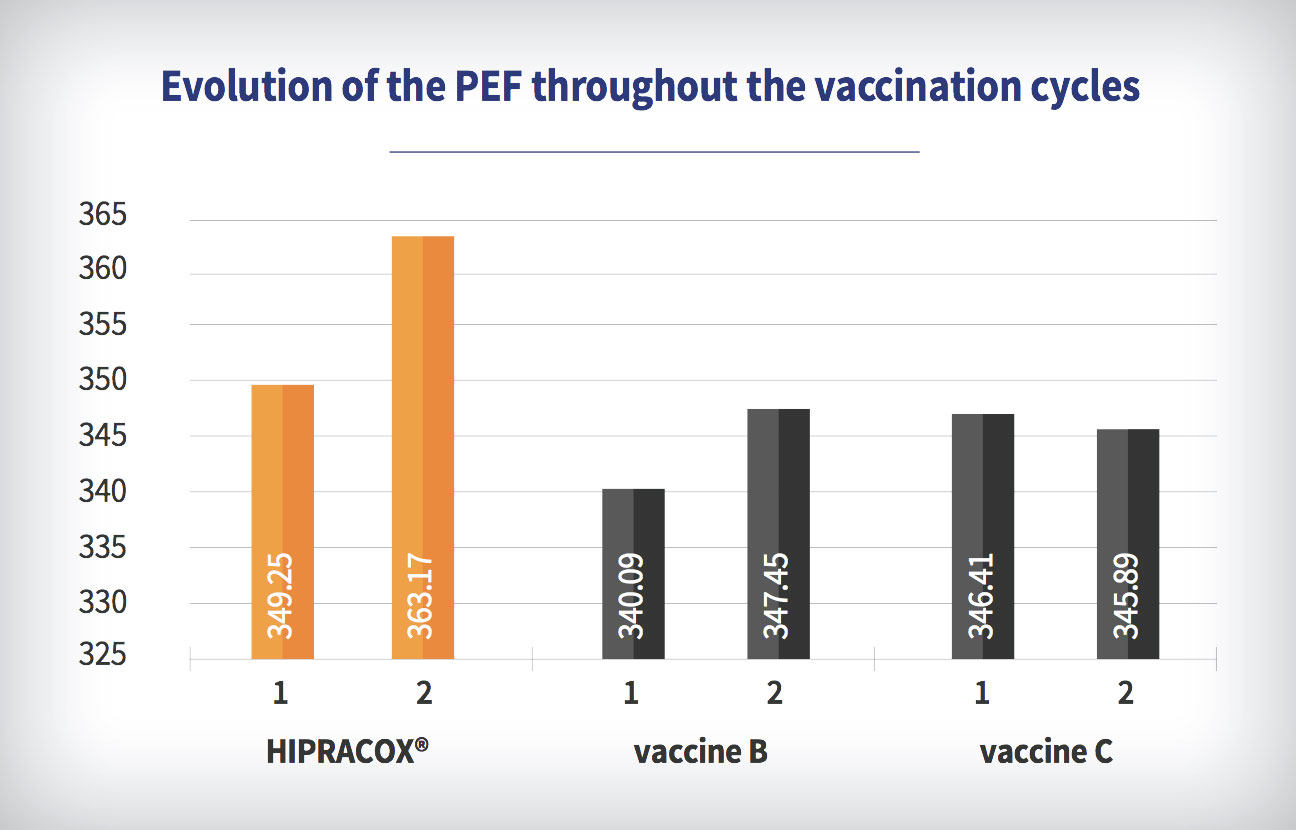 Results of the use of a vaccine for coccidiosis in chickens in Brazil: Company 2

In this other company, the initial objective was to control coccidiosis in chickens by rotating Hipracox® with anticoccidial agents.

However, the results of the second vaccination cycle showed a lower production cost when compared to the anticoccidial programme used, and combined with the significant improvement in clinical cases of coccidiosis, the strategy adopted was to continue vaccinating with Hipracox®.

It is important to point out that this company does not use antibiotic growth promoters (it is AGP-free). 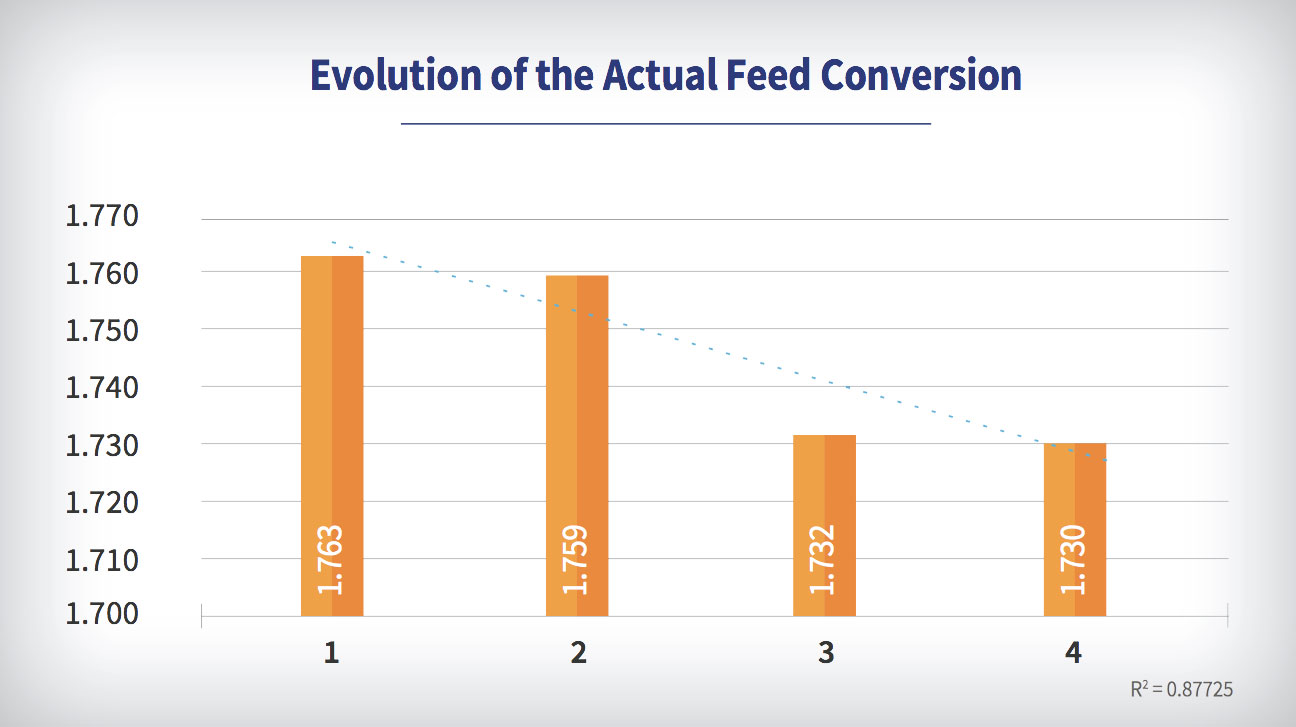 The graph above shows the improvement in the actual feed conversion throughout the course of the vaccination cycles.

As the field oocysts are replaced by Hipracox® oocysts, precocious attenuated, damage from wild-type strains can be avoided, and consequently, the bird performance is improved.

All companies that used Hipracox® achieved a reduction in the number of treatments, mainly for enteritis. This result is the same as the one achieved by field observations in Belgium (Ronsmans et al., 2015).

The graphs below show the results of the oocyst excretion curves on the post-vaccination days with Hipracox® vaccinated flocks, originating from a company with a high degree of resistance to anticoccidial agents. 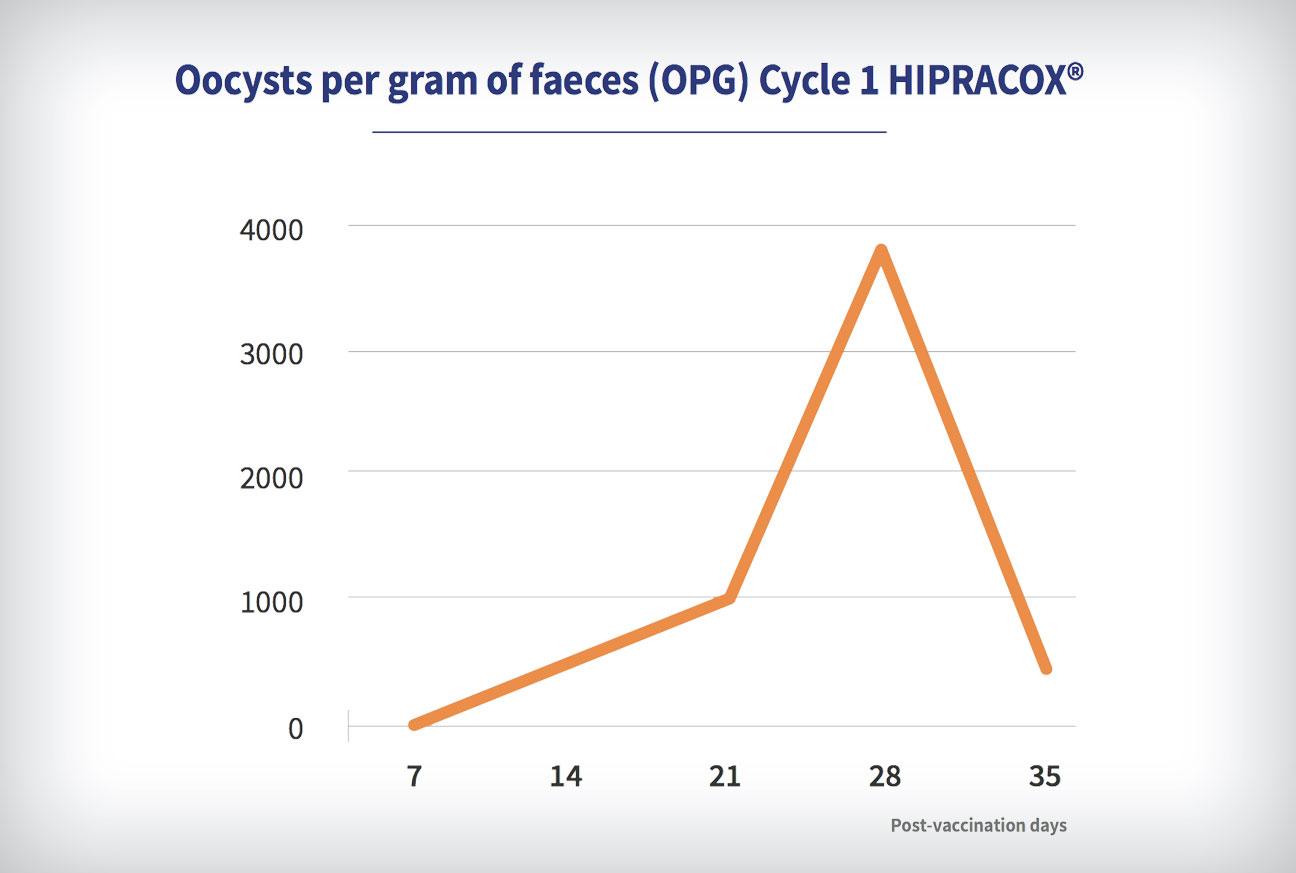 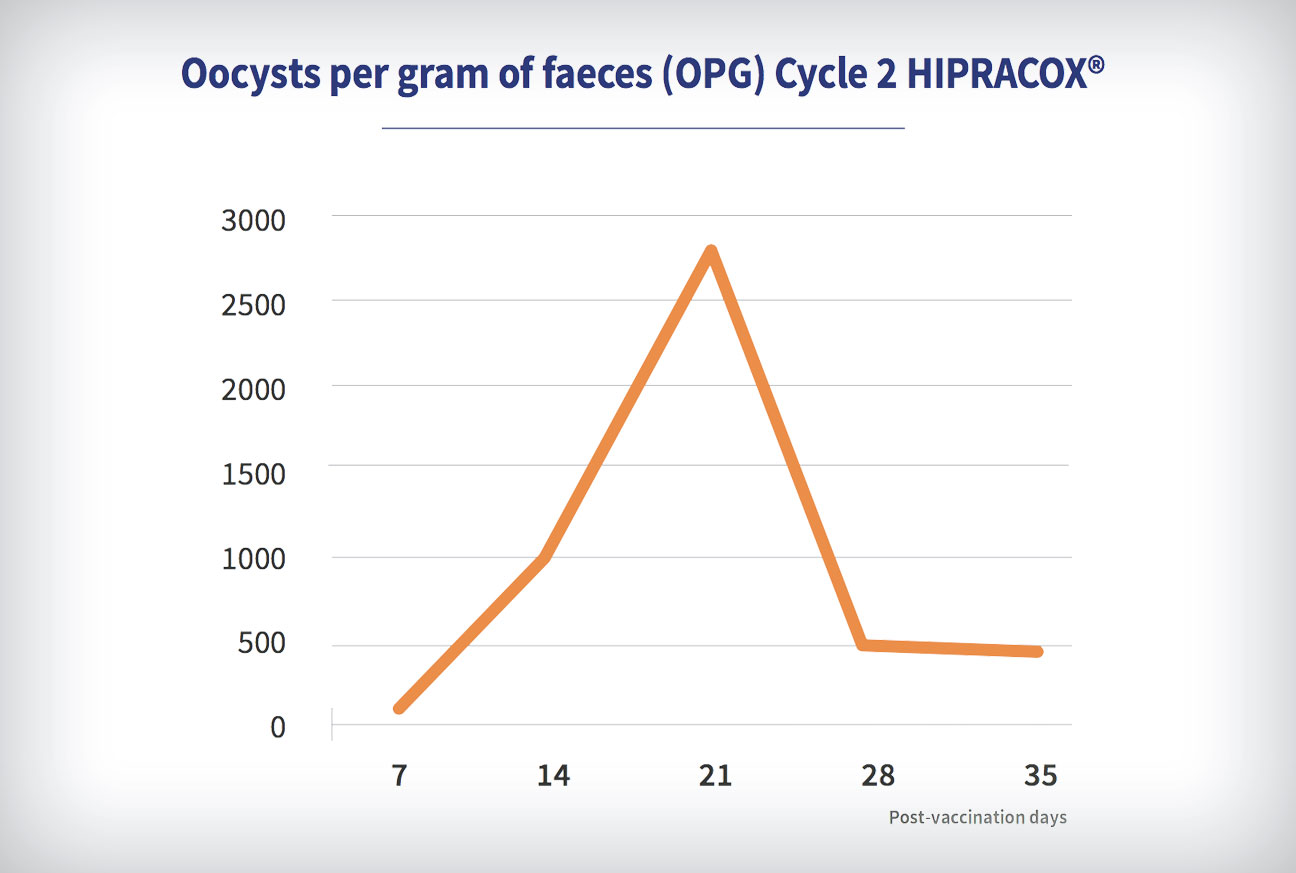 As it has already been pointed out by Dardi et al. in 2015, in the first vaccination cycle, the peak of excretion occurred at 28 days, but with an oocyst count far below what is deemed to be a challenge (60,000 oocysts/gram of faeces).

In the second cycle, the count was also low, but the peak of excretion occurred at 21 days, that is, precocious and with low replication, which in other words means that it caused precocious immunity without prejudging outcomes.

Hipracox®, a live attenuated precocious vaccine against coccidiosis in chickens, already used for 12 years in Europe, succeeded in showing its potential in intensive poultry farming in Brazil, dispelling some false beliefs that spread over the years due to ignoring the technical and conceptual differences in vaccines (virulent – non-attenuated strains versus non-virulent – precocious attenuated strains).

The use of coccidiosis vaccines for chickens, especially in the case of precocious attenuated vaccines, encourages sustainability in the production of broiler chickens, allowing to balance consumer market demand, animal health and economic viability for companies.

Application of a coccidiosis vaccine for chickens: a review of the key points