The most widely-used approach against necrotic enteritis (NE) remains coccidiosis treatment with coccidiostats, even though coccidiosis prevention based on the use of vaccines is indicated to decrease the intestinal lesions caused by specific Eimeria species which are a known predisposing factor to NE (Williams et al., 2003; Williams et al. 2005). In fact, attenuated coccidiosis vaccines could constitute a holistic approach to the control of NE disease and an alternative solution to coccidiostats. 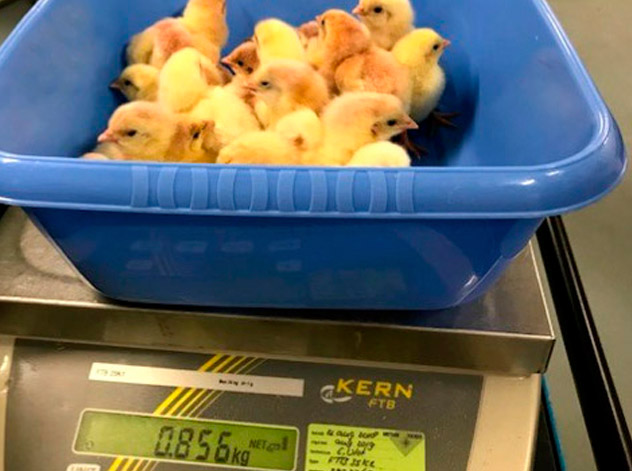 Weighing of vaccinated chicks before allocation

Over the last few years, feed additives have gained special attention from the poultry industry as a tool to improve zootechnical performance (Cave, 1982; Hankel et al., 2018) and as an alternative solution to antimicrobials. This latter is the case of organic acids such as short-chain fatty acids (SCFA) and medium-chain fatty acids (MCFA) (Skrivanová et al., 2005; Timbermont et al., 2010; Yoon et al., 2018), or phytogenic feed additives (PFA) (Mitsch et al., 2004; Timbermont et al., 2010). As an alternative to the use of coccidiosis treatment with coccidiostats, the combination of vaccination against coccidiosis and supplementation of the diet with the above-mentioned feed additives could be a composite approach to the control of NE problems triggered by Eimeria spp. infestation in broilers. The objective of this study was to evaluate the efficacy of an attenuated coccidiosis vaccine for broilers (EVANT®), in combination with different in-feed additives in broilers challenged with necrotic enteritis (NE).

Can we avoid coccidiosis treatment after NE challenge? Testing the feasibility of this new approach

Broiler chicks were supplied from a commercial source and housed at the Schothorst Feed Research facilities.

Table 1. Trial Groups   The standard diets were formulated without coccidiosis treatment based on coccidiostats and antimicrobial growth promoters. Moreover, the grower feed diet was formulated to provide predisposing factors for NE development. Therefore, feedstuffs rich in non-starch polysaccharides were provided, whereas enzymes such as glucanase and xylanase were omitted. The tested diets were prepared by supplementing the standard diet with SCFA, MCFA, or phytogenic feed additives (PFA) throughout the study. Chickens were distributed between 6 experimental groups (Table 1). Groups 3, 4, 5 and 6 were vaccinated at one day of life against coccidiosis with EVANT®. The rest of the groups were not vaccinated. Groups 1, 2 and 3 were then reared without feed additives in the diet, whereas groups 4, 5, 6 were reared with MCFA, SCFA or PFA respectively in the diet. NE was then experimentally induced in groups 2 to 6, whereas group 1 was sham-infected.

Body weights (BW) and feed intake (FI) were recorded during the study. Intestinal lesions were scored according to different methods depending on whether it was for E. maxima (Johnson & Reid, 1970) or for C. perfringens (Lensing et al., 2010).

Finally, excreta samples were periodically collected to evaluate the dynamics of oocyst excretion after vaccination and after challenge. The birds were monitored until 42 days post-vaccination (dpv) as shown in Table 2.

Table 2. Summary of recorded productive parameters   In the present post we have described the possibility of a composite approach with the use of attenuated coccidiosis vaccines and feed additives in order to control the problem of NE in broilers without having to resort to the use of coccidiosis treatment such as coccidiostats. In order to do so, we have described the design of an experimental trial and the parameters under study. In the next post, we will show the exciting outcomes of this trial. REFERENCES:
Previous Post

Can an attenuated vaccine for coccidiosis in chickens increase profitability? Results on farms in Brazil