In our previous post, we talked about the importance of preventing symptoms of coccidiosis in broilers as the main factor affecting gut health, both as a disease and as a predisposing factor to necrotic enteritis. In this post, we will see how feed additives can be used together with coccidiosis vaccines to achieve optimal gut health. 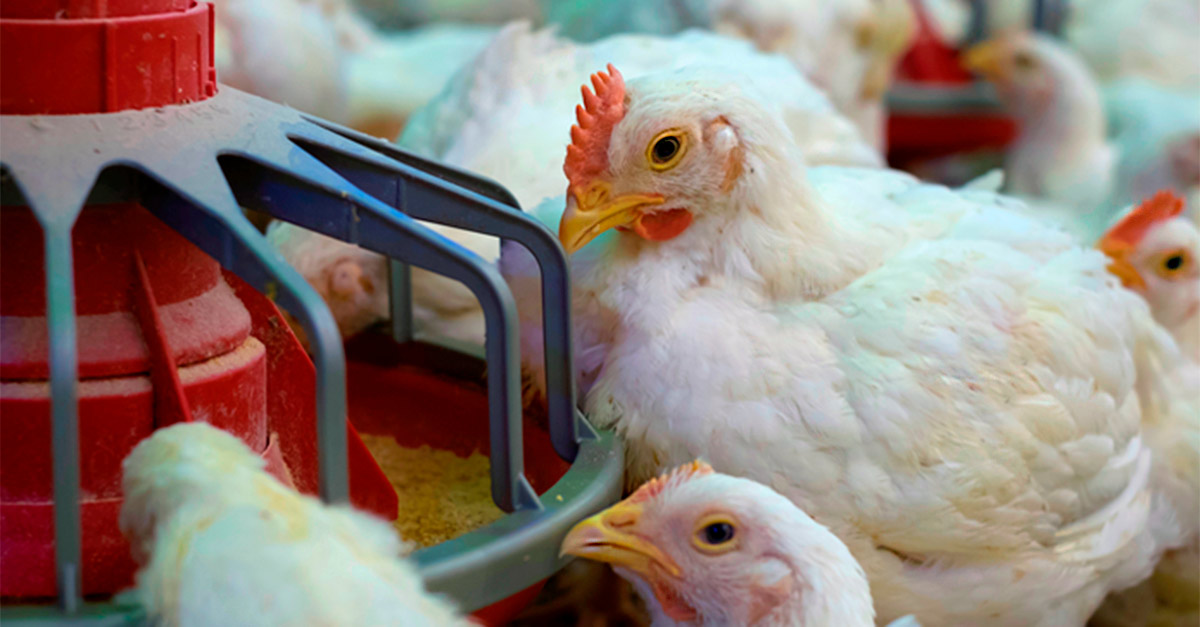 Since the use of antibiotic growth promoters was banned in Europe in 2006, an increase has been seen in the incidence of dysbacteriosis and, in particular, of necrotic enteritis.

In this context, ionophore coccidiostats which, in addition to their action of reducing symptoms of coccidiosis in chickens, have a certain antibiotic effect in the intestine, can be of help in controlling bacterial enteritis.

Because of this, in a production where ionophore coccidiostats are not used, it is important to work to develop other different methods of control.

Intestinal health in a coccidiostat-free environment: prevention of necrotic enteritis

As mentioned before, the prevention of symptoms of coccidiosis in chickens by vaccination is one of the main alternatives.

Thus, avoidance of the lesions produced by Eimeria maxima is established as the principal measure for the reduction of necrotic enteritis (Williams, 2005).

But there are other, nutritional factors which, when well-managed, and in combination with a coccidiosis vaccine, can help to control the risk of proliferation of Clostridium perfringens.

We are referring, inter alia, to the composition of the feed given to the birds. For example, a high percentage of total protein in the feed formula, without the use of appropriate protease enzymes to increase digestion and absorption, will provide a very valuable substrate for bacterial growth.

A similar case arises with the inclusion of excessive amounts of white or viscous cereals (wheat, barley, rye, oats), which are rich in non-starch polysaccharides (NSP) and increase viscosity in the intestine, reduce transit and foster the proliferation of Clostridium (Branton et al., 1987; Annett et al., 2002).

On the other hand, all too often, control of the level of mycotoxins in the poultry feed is not given the importance it deserves as a predisposing factor for disease, and in the case in point, as a precursor to symptoms of coccidiosis in chickens and/or necrotic enteritis.

Indeed, large quantities of mycotoxins such as aflatoxins, deoxynivalenol or T-2/HT-2, produce immunosuppression and/or gastrointestinal changes that can facilitate the development of the disease.

Preventing the symptoms of coccidiosis in chickens: Vaccines & nutritional additives

As part of this nutritional focus, we need to highlight the growing interest in the use of nutritional additives for the control of bacterial enteritis.

The large group of compounds used as additives includes probiotics and prebiotics.

In addition to the other benefits that they provide (for example as immunostimulants), their main function is as regulators of the intestinal microbiota, promoting the proliferation of bacteria regarded as saprophytes, which will compete with others that may be pathogenic, such as Clostridium perfringens (McReynolds et al., 2009).

HIPRA has carried out studies to evaluate the synergistic effect of a vaccine for coccidiosis in broilers (HIPRACOX®) and a  symbiotic, a combination of probiotics and prebiotics (PoultryStar®-Biomin), against an induced coccidiosis challenge, and found a huge reduction in symptoms of coccidiosis in chickens and an improvement in productive results, compared to the untreated animals (Dardi et al., 2018).

The use of exogenous enzymes to promote good intestinal health is also of great interest.

These enzymes act by making the digestion and absorption of nutrients more efficient, which, in addition to improving productive performance and feed costs, reduces the amount that is left as a substrate for bacterial proliferation.

The case of proteases which has been mentioned, or the addition of xylanase and/or β-glucanase enzymes when there are high levels of viscous cereals, are two good examples of the use of these additives.

Also of note in this context is the antibacterial effect of certain phytogenic additives, such as the essential oils of oregano, thyme, pepper, cinnamon and nutmeg, or extracts of yucca, onion and ginseng, inter alia.

When a combination of different phytobiotic substances is added to poultry feed there is also a benefit from their function in the intestine as stimulants to ingestion and digestion, their immunomodulation, and their anti-inflammatory and antioxidant effects.

In the case of the former, the beneficial intestinal effects of butyrate salts are well known, both in the promotion of the growth of epithelial cells and the integrity of the mucosa, and for their action against Gram-negative bacteria (E. coli, Salmonella spp., etc.).

As regards the MCFA, especially lauric acid, their preventative effect against necrotic enteritis has been shown to be comparable to that of growth-promoting antibiotics (Timbermont et al., 2010).

HIPRA, with an interest in investigating the possible synergistic effect produced by even better gut health, is currently testing the beneficial effects of its new coccidiosis vaccine for chickens, EVANT®, in combination with various additives individually (phytogenics, SCFA, MCFA).

The results of these studies look very promising. Coccidiosis vaccination, shows a high level of protection against a necrotic enteritis challenge, preventing the lesions and mortality caused by the disease (by means of reducing the symptoms of coccidiosis in chickens).

On the other hand, in combination with each of the additives, the same good results were again obtained in terms of productive performance (with the addition of the beneficial effects of phytogenics and butyrate on the ingestion and digestion of nutrients), mortality and lesions (even, in the case of lauric acid, decreasing even further the grade of lesions caused by C. perfringens).

Can a live attenuated Eimeria vaccine be effective in long-life birds under field conditions in Mexico?