Share on TwitterShare on Linkedin
The constant process of evolution in the poultry industry has resulted in levels of production that were inconceivable a few years ago. But these achievements are linked to a good efficiency in feed utilisation, which may be affected by disturbances such as bacterial enteritis or coccidiosis symptoms. 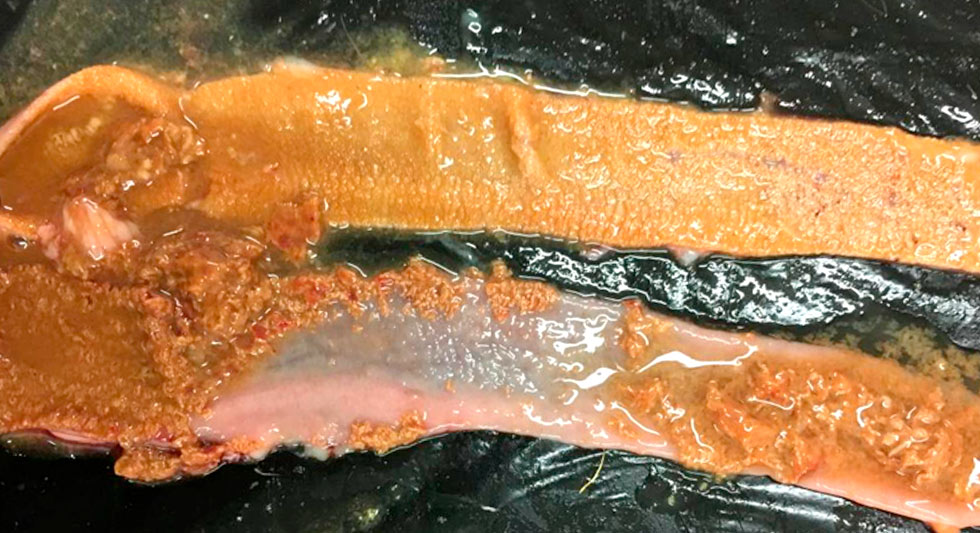 Example of necrotic enteritis lesions in the medium intestine. It is therefore essential to achieve optimum gut health in order to harness the full productive potential brought about by genetic and technological improvements. But what do we mean when we talk about gut health? Basically, we can say that it consists of the interaction of the following factors: the diet consumed, the mucosa and the commensal microbiota present in the gastrointestinal tract. Thus, gut health is based on a symbiotic equilibrium between the microbiota and the mucosa, where the welfare and performance of the bird is not constrained by intestinal dysfunction (Celi et al., 2017). Under current conditions of production, the birds’ gut is subject to a high level of pressure and of demands. The risk of succumbing to this pressure and suffering imbalances is very high. This destabilisation in the intestinal environment is reflected in changes in the composition of the microbiota, damage to the mucosa and loss of integrity (e.g. coccidiosis symptoms), and consequent impairment of absorption of nutrients and of productive results. It is therefore necessary to create a healthy intestinal environment (e.g. by means of a good coccidiosis treatment for prevention), and to take measures to prevent enteric disorders that can contribute to these imbalances.

Coccidiosis as a predisposing factor for bacterial enteritis

Coccidiosis in broilers and hens appears to be one of the principal destabilising agents, causing the destruction of enterocytes and affecting the integrity of the intestinal mucosa and wall. The lesions that it causes, the inflammatory process, the reduced absorption and consequent excess of nutrients in the lumen, all contribute to the proliferation of certain groups of bacteria, in particular colonisation by Salmonella spp. (Takimoto et al., 1984), Escherichia coli (Nakamura et al., 1990) and, above all, Clostridium perfringens (Porter et al., 1998). This situation clearly predisposes birds to intestinal dysbiosis and/or bacterial enteritis and in particular a process of necrotic enteritis. When the overgrowth of C. perfringens causes necrotic enteritis, this further aggravates the damage to the mucosa and intestinal functioning, resulting in worse feed conversion rates and performance, and can cause high mortality rates. Coccidiosis treatments for prevention are therefore essential for optimal intestinal health. Any method of disease control must always be accompanied by the most appropriate hygiene and management conditions. Of the range of strategies used to control the disease (Peek & Landman, 2011; Tarek et al., 2016), the most widespread is, without a doubt, the use of anticoccidials (Johnson & Reid, 1970;Vinay et al., 2013). The use of vaccines has also been shown to be highly effective for the development of immunity to the parasite (Shirley et al., 2007; Alameda et al., 2015). Another alternative is the addition, to the feed or the drinking water, of products which have a direct or indirect action on the replication of the parasite, or on its intestinal adverse effects, for example phytogenics, probiotics, prebiotics, enzymes, etc. (Allen et al., 1998).

Prevention of coccidiosis with the use of vaccines

Prophylaxis with live vaccines has seen continuous growth as coccidiosis treatment for prevention. The progressive development of resistance to the effect of coccidiostats by different species of Eimeria has meant that, although anticoccidials are still the preferred method for control of the disease, they are not able to reduce all coccidiosis symptoms and consequences, and prevention by means of vaccination has been on the increase. Vaccination can be part of a strategy of rotation of several cycles alternating with coccidiostats, so that, in addition to the development of immunity in the vaccinated cycles, it contributes to the recovery of the sensitivity of the Eimeria strains to the coccidiostats during the cycles in which they are used (Chapman & Jeffers, 2014; Dardi et al., 2015). On the other hand, ever more producers are using vaccines as the main method of control of coccidiosis in broilers, reducing (Ronsmans et al., 2015) or completely giving up the use of coccidiostats (new production trends: processes of demedicalisation, with reduction of antibiotic use or completely antibiotic-free production; organic or eco products; certified birds or slow-growing birds). Live attenuated vaccines (e.g. HIPRA’s HIPRACOX® and EVALON® vaccines, or its most recent one, EVANT®) are the only ones authorised in Europe, in contrast to those based on the inclusion of wild strains, and have been shown to be highly effective as coccidiosis treatment for prevention. In addition, owing to the process of attenuation, they are also very safe vaccines, having a very modest intestinal impact during replication (Dardi et al., 2017). BIBLIOGRAPHY:
Previous Post

After a spray vaccination in chickens, the uniform ingestion of the oocysts included in the coccidiosis vaccines is essential to...