In most Asian countries, anticoccidial drugs are still widely used against coccidiosis in chickens, both in broilers but surprisingly also in long life birds such as native/colour chickens, layers and on some breeder farms. In this post, we will describe the use of a live attenuated vaccine against coccidiosis in chickens on an open-house breeder farm during the dry season in the Philippines. 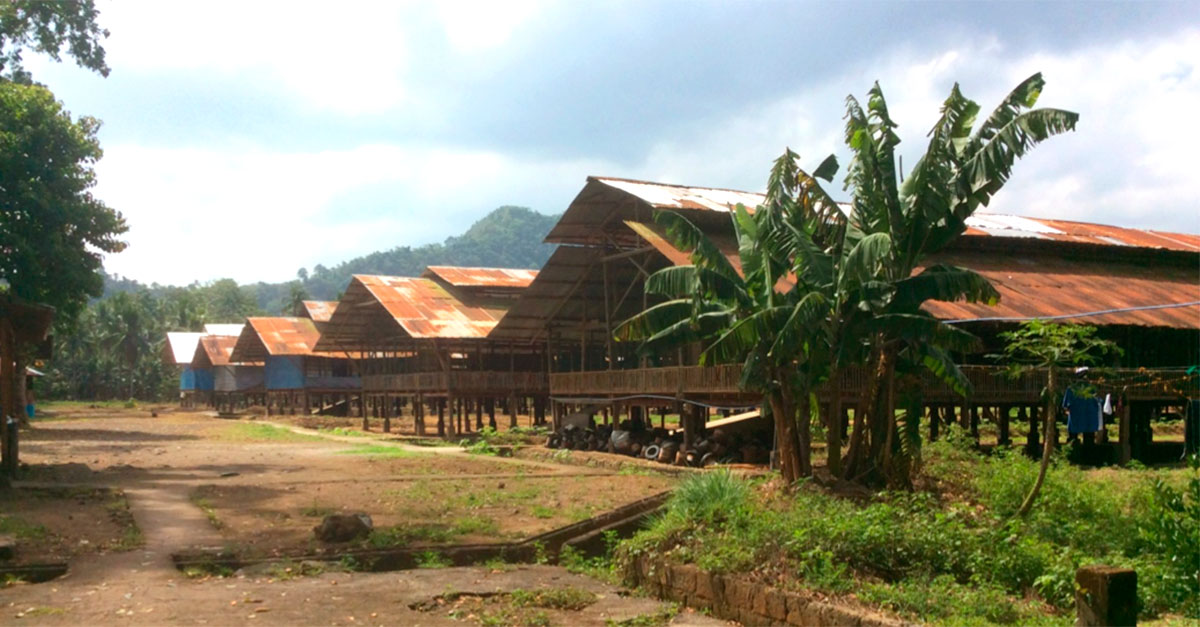 With the increasing problems of drug-resistance and pressure from consumers to ban drugs from animal feeds, there is a pressing need to move away from chemotherapeutic control towards vaccination against coccidiosis in chickens.

Furthermore, vaccines are the only products that are able to generate a good level of specific immunity from the very beginning.

The first vaccine against coccidiosis in chickens appeared in 1952 in the US.

Non-attenuated strains are used in this vaccine and some medication with anticoccidials is sometimes still needed after vaccination. The non-attenuated vaccines comprise parasites that derive from laboratory strains, but they still maintain their natural virulence.

This strategy of “controlled exposure” allows protective immunity to develop; however, if there is an asynchronous infection within the flock some birds may still ingest large numbers of oocysts leading to clinical disease.

In addition, the non-attenuated vaccine strains still undergo the normal replicative cycle in the intestine and cause some degree of tissue damage. These old vaccines are still in use in America, Africa and several countries in Asia.

In the 1990’s, a new generation of vaccines for coccidiosis in chickens appeared on the market. These were vaccines produced with attenuated strains.

The behaviour of these strains is totally different when compared with non-attenuated strains, with minimum impact on the intestinal mucosa and no impact on performance in the birds.

Therefore, from a technical point of view, live attenuated vaccines should be the preferred type of vaccine to be used in the field. However, this kind of vaccine is widely used only in Europe, Japan and Australia.

Nowadays the poultry industry is more or less standardized but in Asian countries we can still find traditional housing and farm management systems that differ from typical European conditions.

And what happened under Asian field conditions?

Day-old broiler breeder chicks were vaccinated against coccidiosis in chickens with EVALON® at hatchery level with a battery operated backpack sprayer.

The farm to which the chicks were allocated was an open-house with a traditional bamboo slatted-floor.

The capacity of the farm was 22,000 birds distributed between 5 houses. Three pens per house.

Brooding took place in a confined area, just three houses were used as brooders, and later on the birds were transferred to annex pens within the same house at 21 days of age and then to other houses at 28 days of age.

Chicks remained on rice hull bedding in the brooding area up to day 7. 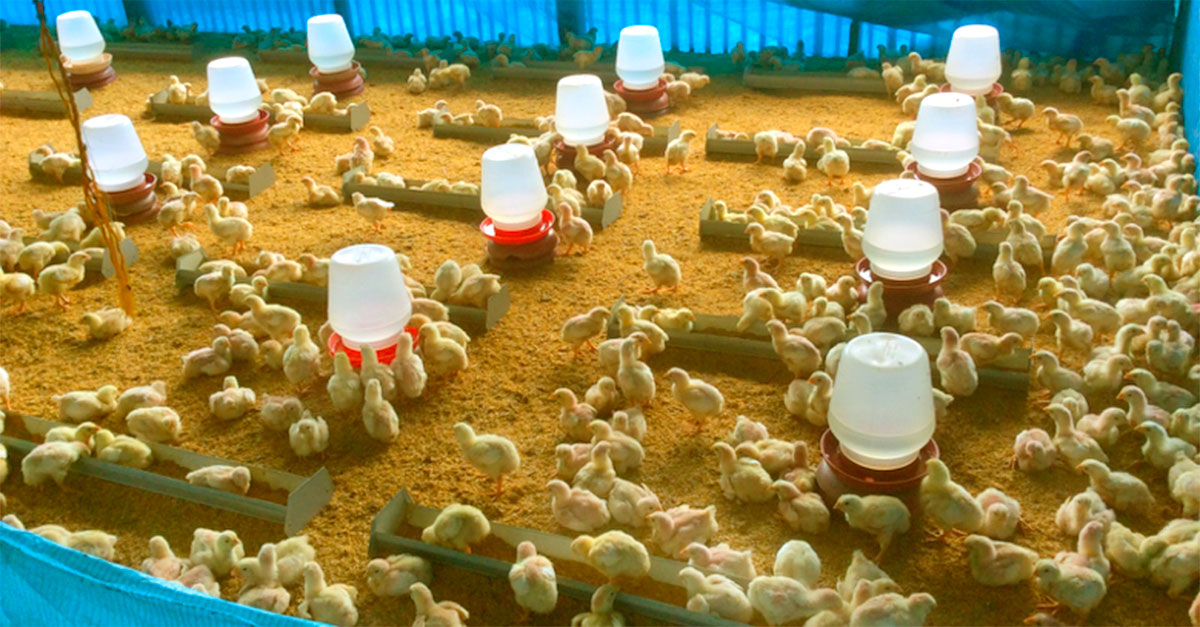 Week 1: birds in the brooding area.

On day 8, the birds experienced the first expansion with the opening of the brooding area.

Litter remained in the brooding area up to day 21 of life when it was totally removed, but the density of chicks on the litter from day 7 to day 21 was drastically reduced and so was the number of chicks having contact with the vaccine oocysts for a second time.

The recycling of the vaccine oocysts in the litter is crucial for the onset of immunity against coccidiosis in chickens.

The immune system of the birds has to be exposed twice –sometimes three times – to the parasite in order to develop the adaptive immune response.

The first contact relies on the vaccination process: at one day of age, birds intake the sporulated oocysts contained in the vaccine; sporocysts are released in the stomach and sporozoites in the intestine.

As a result of the completion of the parasite life cycle, immature oocysts are excreted with the faeces.

These immature oocysts have to sporulate in the litter – very important temperature and humidity conditions – and have to be ingested again by the birds for a second cycle.

If we don’t keep birds in contact with the faeces (litter of the brooding area) for the first two weeks, we take the risk of stopping the recycling of the vaccine and fail in the immunization of the chicks. 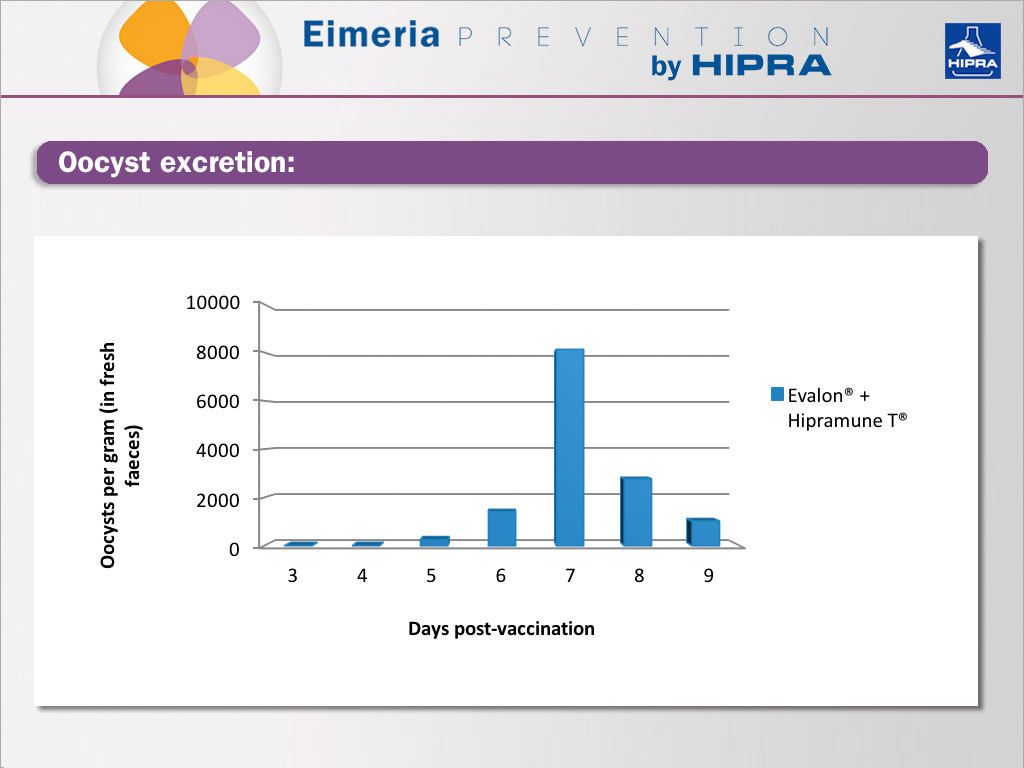 Oocyst excretion in the faeces after vaccination at one day of age with optimal litter conditions.

We take it for granted that nobody uses anticoccidial drugs in flocks vaccinated against coccidiosis in chickens, but we have to remember that some common antibiotics like spiramycin, tetracycline (Ball and Warren, 1966) and sulfonamides also interfere with the normal replication of Eimeria.

It is very important to avoid the use of these molecules at least during the first three weeks of life whilst immunity is developing. Despite being given advice on this point, chicks were treated with doxycycline from day 1 to day 3.

We collected samples for the first five weeks of life to assess vaccine intake and field pressure on the farm.

The oocysts recovered in the first three weeks can be exclusively claimed to come from the vaccine, with peaking expected in the 2nd or 3rd and a decline in the next samplings.

If the level of oocysts in the 4th and 5th week is still high or if we see a rising trend, we can assume that there is a coccidiosis challenge on the farm.

Regardless of all the above-mentioned setbacks, antibiotic treatment and limited access to litter material, oocysts were recovered from fresh faeces at weeks 3 and 5. 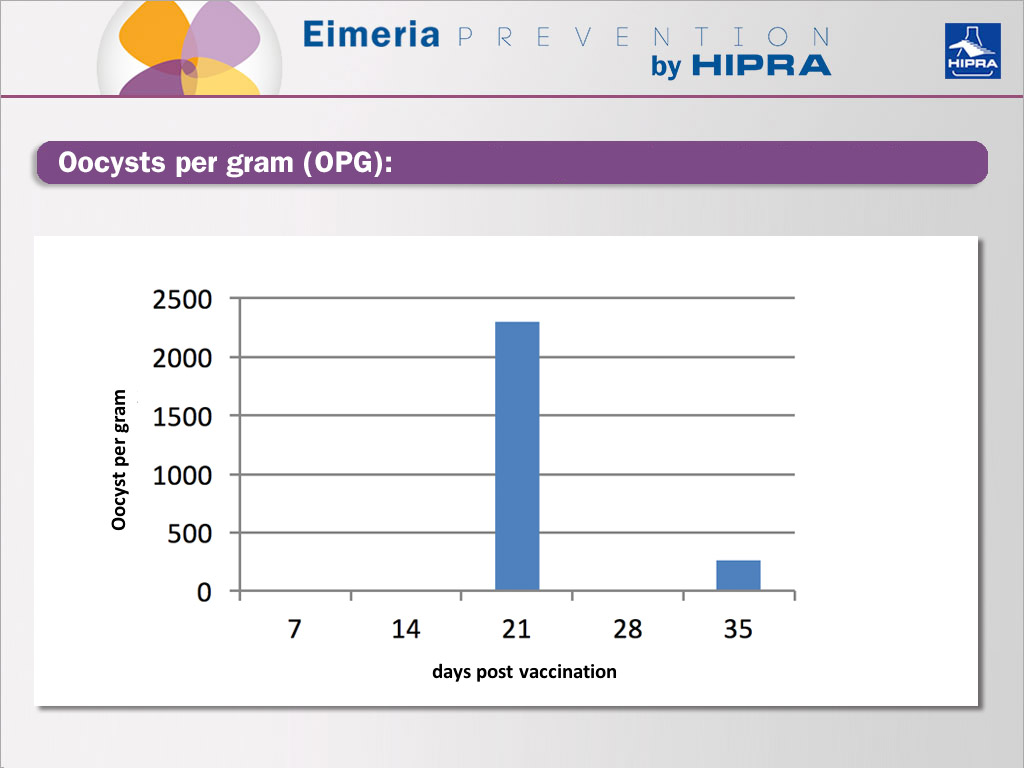 Weekly oocyst counts to follow up the vaccine intake

At day 14 some faeces with mucoid content were seen on the farm.

We performed some necropsies to check the severity of the intestinal lesions and we observed only mild enteritis. This kind of faeces subsided in a few days and no other incident regarding intestinal integrity was reported during the rearing. 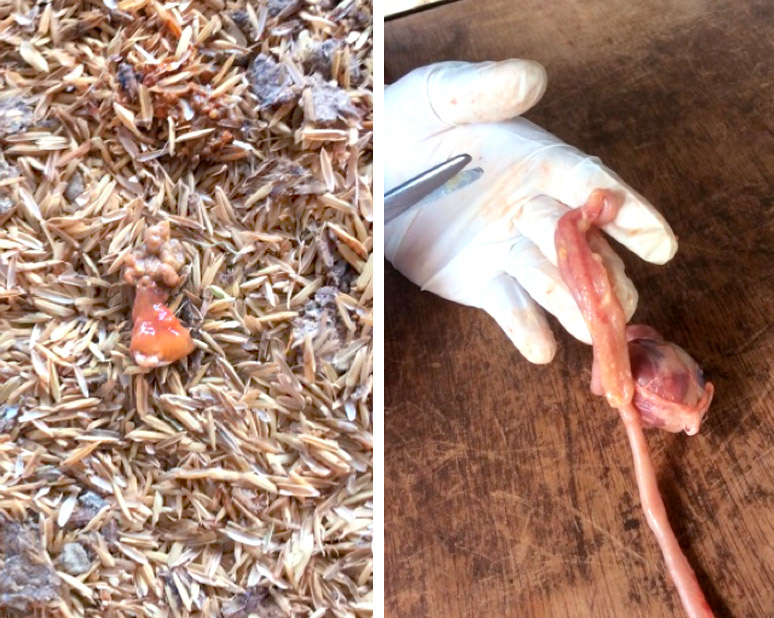 On the left, mucoid content in faeces at 14 days. On the right, Intestine at 14 days.

Regarding the production parameters of the flock, body weight, feed consumption and flock uniformity were recorded during the first 14 weeks of life. 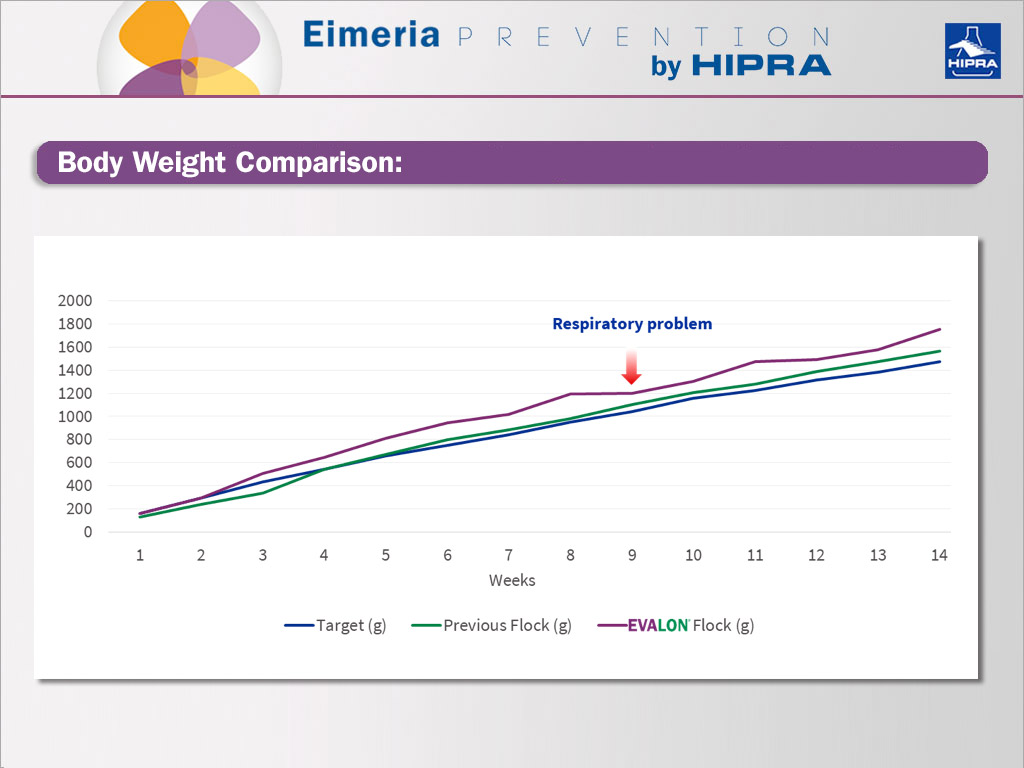 Comparison of body weight between previous, target and EVALON® flocks. 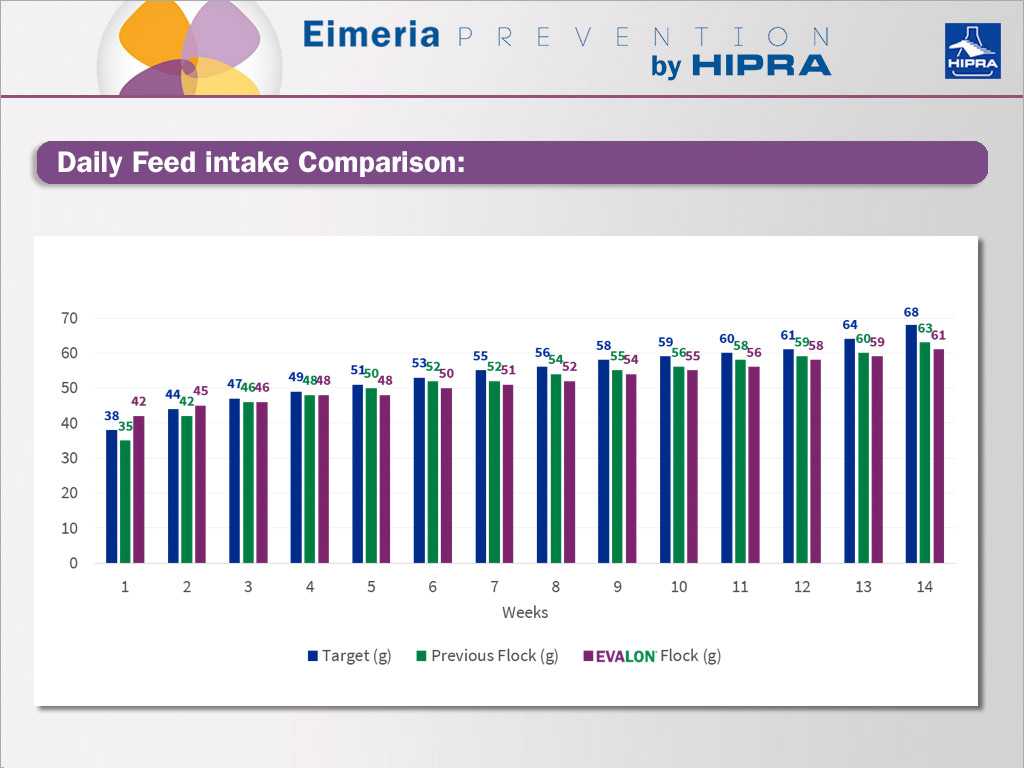 As a consequence, feed conversion (FCR) was highly positive for the EVALON® flock with 380 grams less feed ingested per bird at 14 weeks of age. 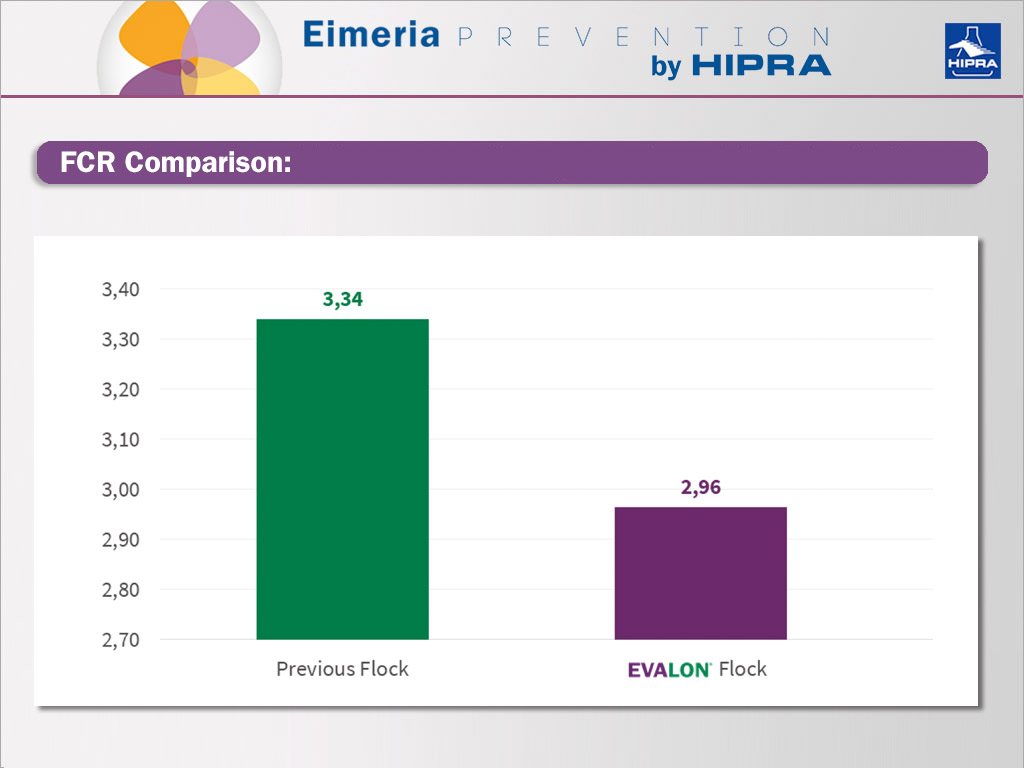 Comparison of FCR between previous and EVALON® flocks. 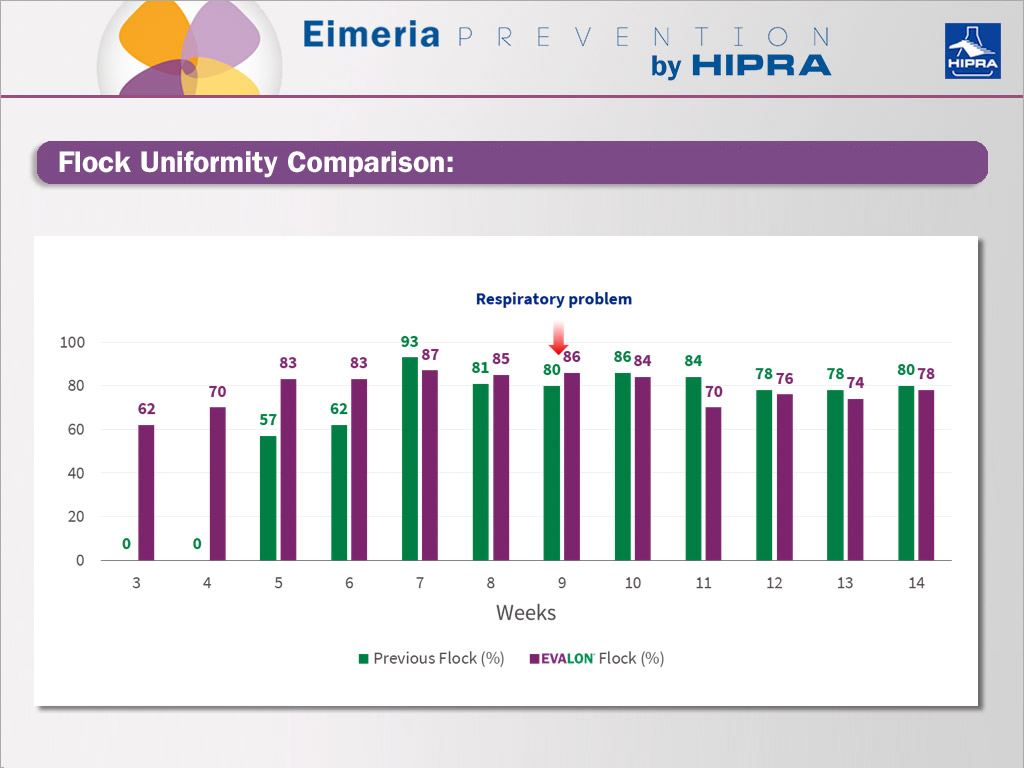 Comparison of flock uniformity between previous and EVALON® flocks.

All the production parameters showed a good performance with EVALON®, an attenuated vaccine against coccidiosis in chickens, on this farm.

Overall, we can regard this as a substantial improvement compared to the previous flock.

To conclude, we need to highlight the fact that irrespective of the type or automation level of the poultry house there are three main factors that determine the success or failure of vaccination against coccidiosis in chickens with attenuated vaccines:

Brooding management: if we put all our efforts into good administration and into maintaining favourable environmental conditions for the sporulation of the oocysts but are unable to ensure satisfactory recycling of the vaccine oocysts among our birds, all our efforts will be in vain.