Can a live attenuated Eimeria vaccine be effective in long-life birds under field conditions in Mexico?

In the study presented in this post, the objective was to evaluate the efficacy against coccidiosis of a live Eimeria vaccine attenuated for precociousness (EVALON®), administered in breeder production under field conditions in Mexico and without the use of anticoccidial treatments.

Figure 1. Lesion score in breeder birds after vaccination with EVALON®. From week 3 – week 8 of life.

In a study from 2017, Dardi et al., already proposed the use of live Eimeria vaccines attenuated for precociousness as a safe method of developing immunity in long-life birds and preventing coccidiosis.

The evaluation was carried out on a farm located in an area with an average annual temperature of 25oC and relative humidity of 65-85%.

This area and farm have been historically considered by veterinary practitioners as being at high risk of suffering outbreaks of coccidiosis.

The Eimeria vaccine EVALON® was administered to 30,000 broiler breeders by coarse spray droplets on the first day of life.

A protocol for monitoring the development of immunity was implemented, which consisted of the weekly collection of faecal samples for an oocyst count to be performed from day 14 to day 35.

Necropsies were performed in order to grade the damage to the intestine, (using the Johnson & Reid (1970) scale, on the days with the greatest replication of coccidia (days 21, 28, 35) and in the week which historically has been critical for the appearance of outbreaks of Eimeria necatrix (day 56).

The productive parameters of the birds were recorded throughout the rearing period (20 weeks).

These results were then also compared with another flock, from the same farm raised under the same conditions, the only difference being that they had been vaccinated against coccidia with unattenuated strains, made by another company.

How as the effectiveness of the Eimeria attenuated vaccine demonstrated?

If we examine the dynamics of the excretion of Eimeria oocysts in Graph 1, we can see that there was good replication of the vaccine oocysts with a good level of excretion of over 13,000 oocysts/gram at 21 days.

It will be noted that at 14 and 21 days we see the replication of vaccine oocysts as the strains are precocious, that is to say they replicate more quickly than field strains.

The very high peak (over 100,000 oocysts/gram) at 28 days, confirms that it was a farm with a coccidia challenge as it is typically at this age that the coccidia pressure on the farm is revealed.

Whilst the decrease in the count at 35 days indicates that from this time the birds were immunised. 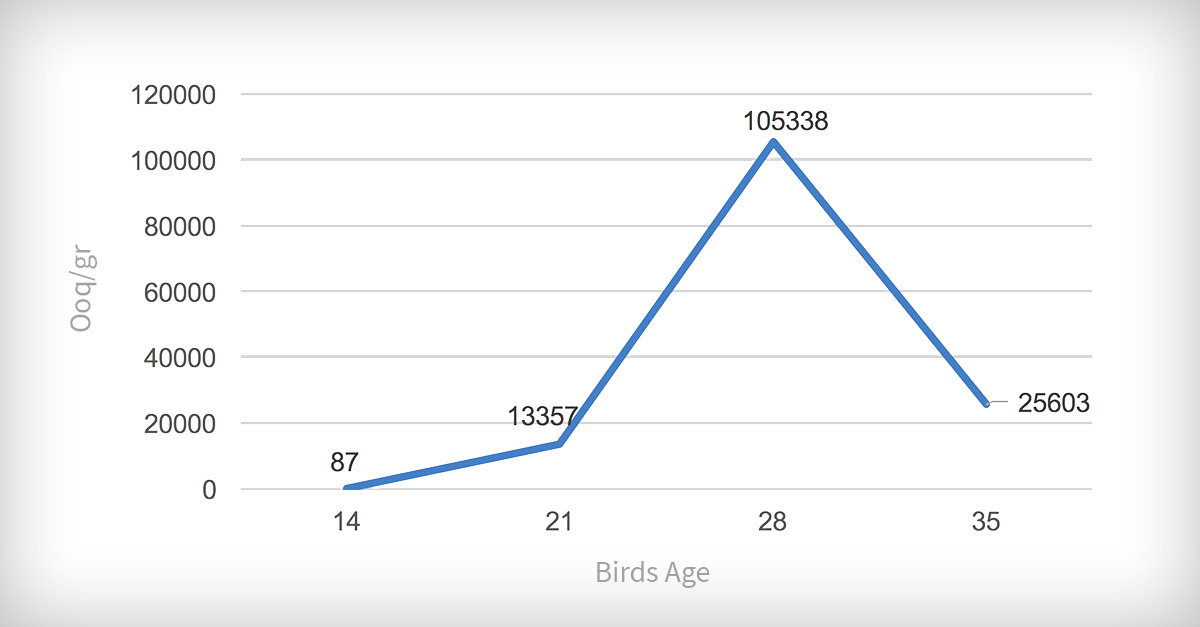 Graph 2. Oocyst excretion dynamics in a sample of fresh faeces.

At the same time, in the lesion score there were values of 0 on the Johnson-Reid scale for all the Eimeria species contained in the vaccine (Figure 1).

Despite the resultant high oocyst counts in the samples of fresh faeces, no lesions were observed in the different parts of the intestine and caecum: on the one hand because they are attenuated strains, and on the other because the birds were immunised correctly before the field challenge which occurred at 28 days.

Moreover, a good establishment of immunity can be inferred since towards week 8, the critical age for outbreaks of Eimeria necatrix, there was no damage to the intestinal mucosa either.

One of the production variables which is most affected during an outbreak of coccidiosis is the mortality of birds at young ages.

In this study, mortality amongst the birds that were immunised with strains attenuated for precociousness was 2.64% and 4.11% less in females and males respectively (Graphs 3 and 4). 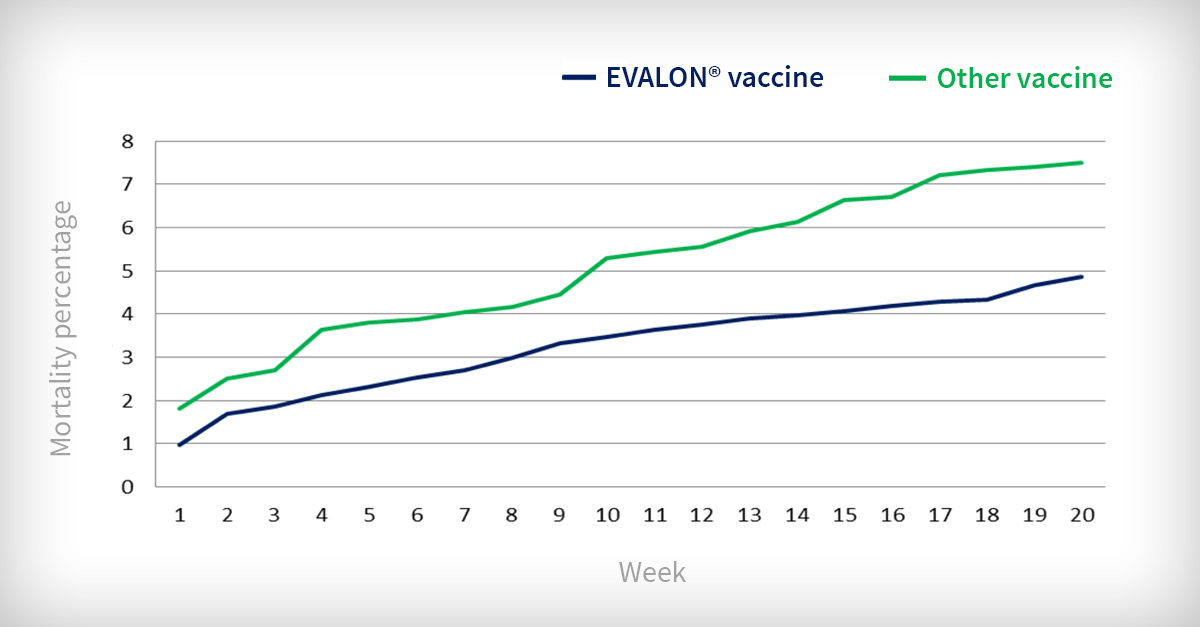 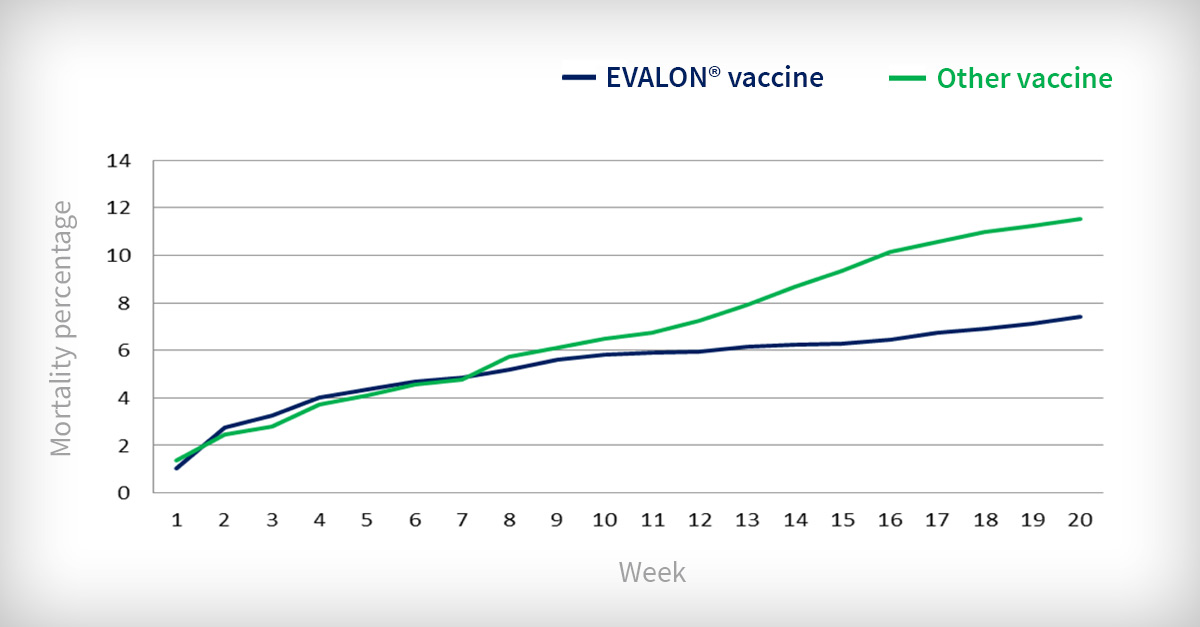 The selection pressure in achieving greater uniformity was less in the females and males that were vaccinated with EVALON® (Graphs 5 and 6), thus reducing the handling and stress of the birds. 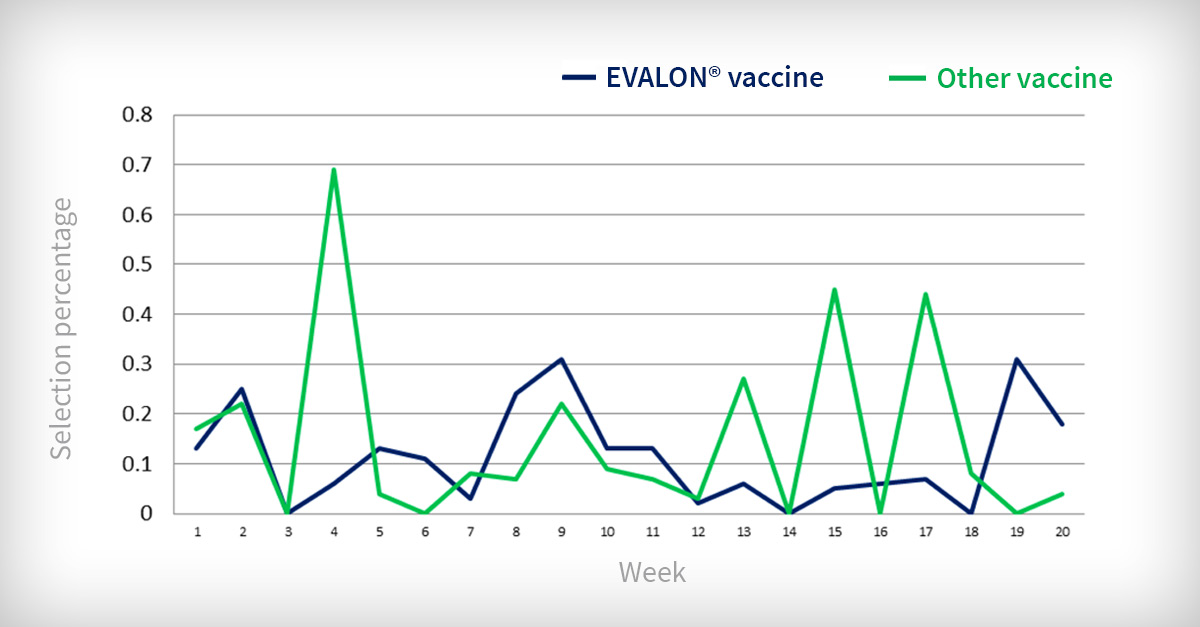 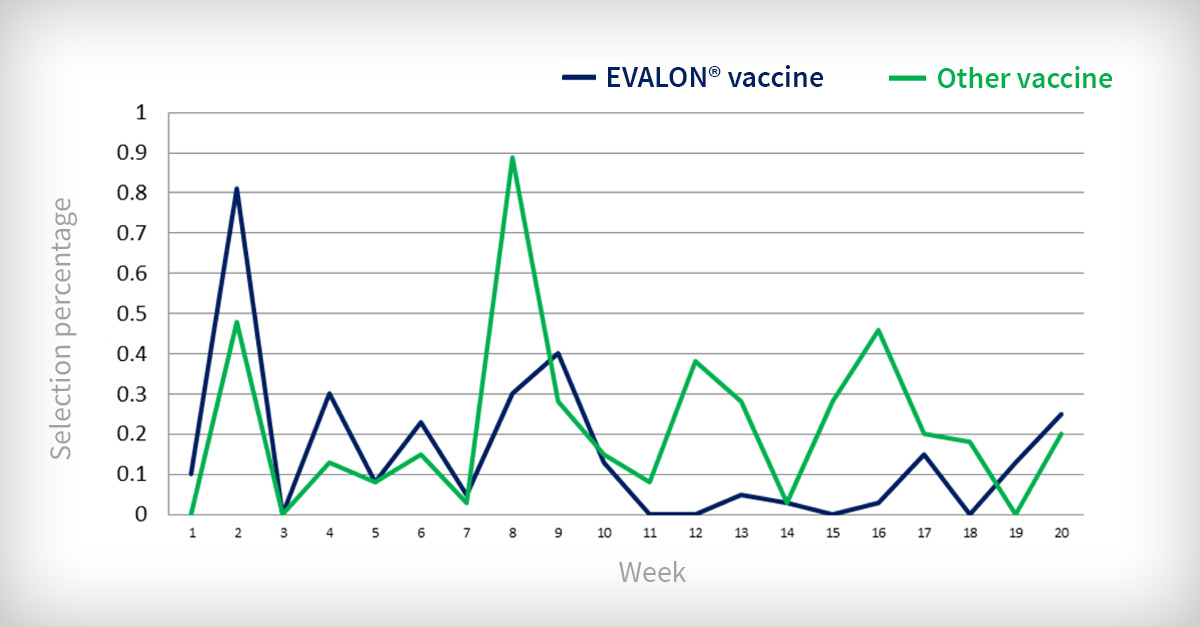 Graph 7 shows that the uniformity of the flock was better at the critical ages for coccidial challenges (between weeks 8 and 12), when the birds were immunized with live vaccine attenuated for precociousness.

Moreover, the birds vaccinated with EVALON® never had to undergo anticoccidial treatments and had good intestinal integrity, good weight gains and less selection pressure (Graphs 5 and 6). 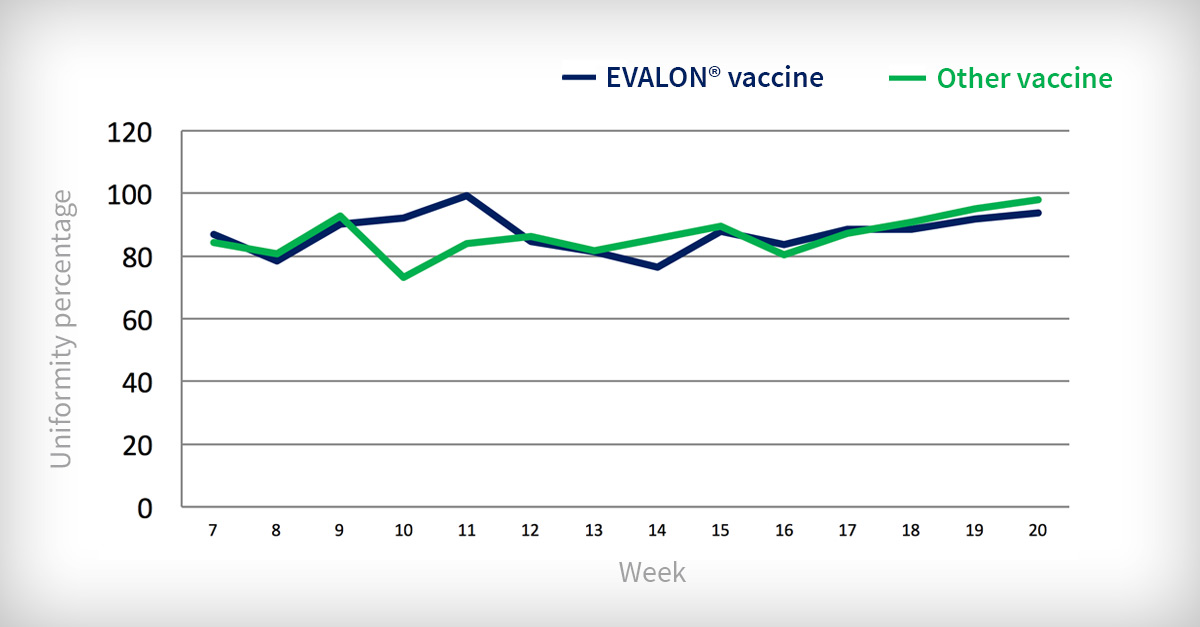 The body weight of females and males was not affected by the administration of the EVALON® vaccine.

In Graphs 8 and 9, it can be seen that the birds followed a linear trend towards an increase in body weight.

In the females vaccinated with EVALON®, the body weight was +10 grams above the standard weight, compared to the females that were given an unattenuated vaccine, which increased by 133 grams.

The higher final weight in the females of the unattenuated group was surely influenced by a higher selection pressure (due to less uniformity) which resulted also in increased mortality in this group. 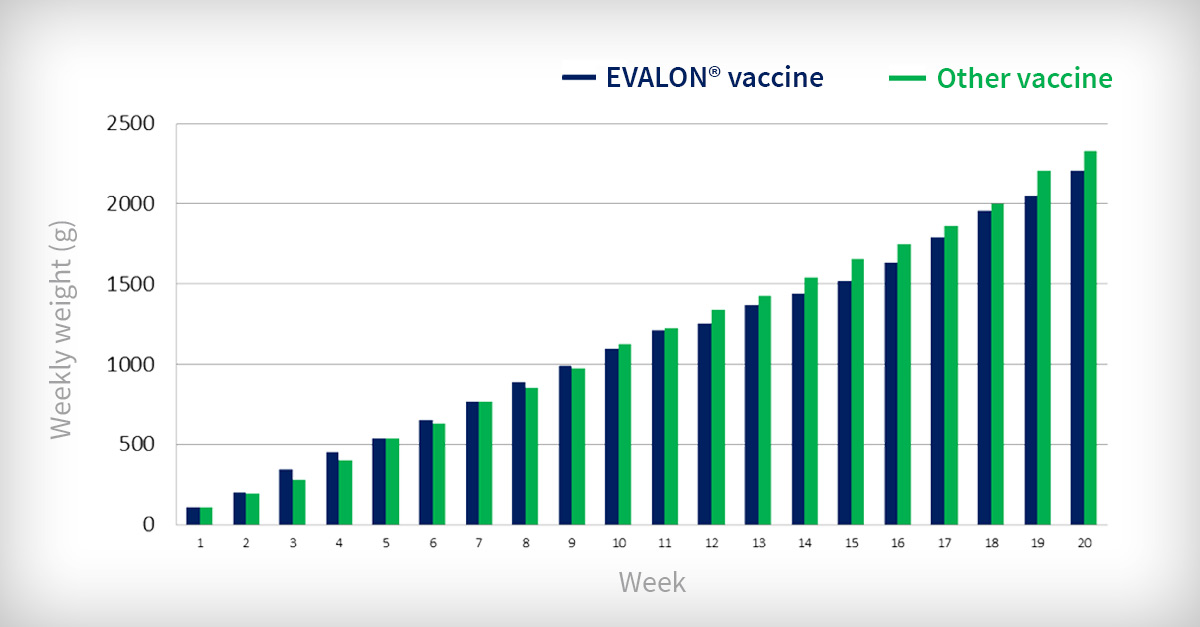 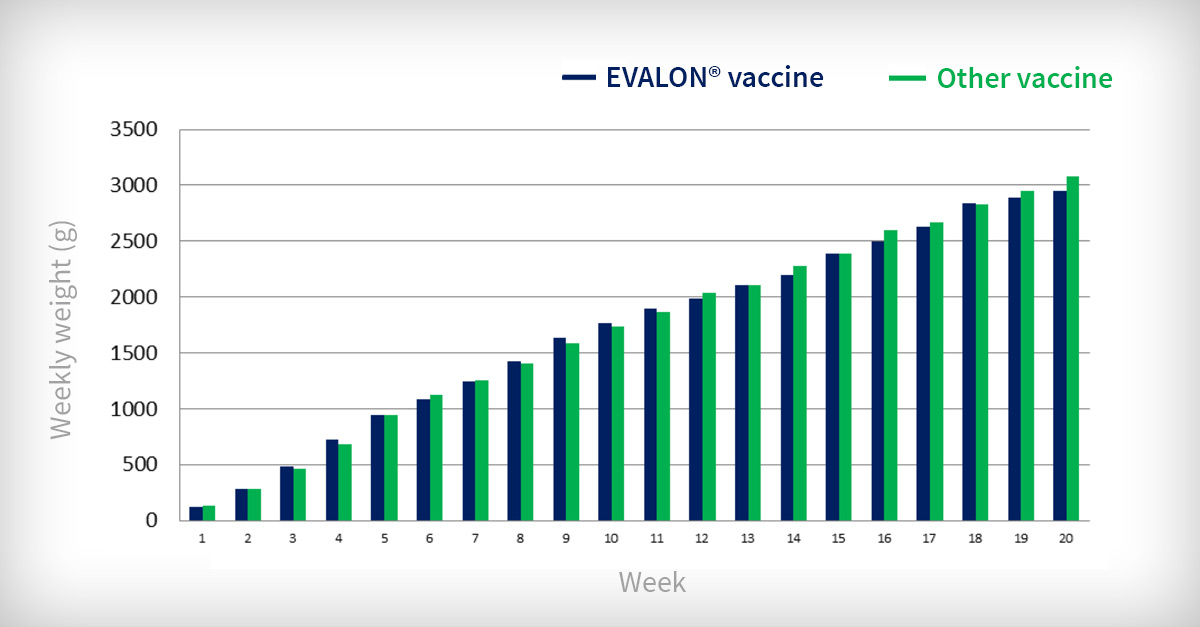 To conclude, the results of this study show the efficacy of the use of the EVALON® vaccine (live vaccine attenuated for precociousness) in the prevention of Eimeria in broiler breeders, reared on farms and in areas of Mexico at risk of outbreaks of wild coccidia.

What do coccidiosis prevention & Smart Vaccination for poultry have in common?

What do coccidiosis prevention & Smart Vaccination for poultry have in common?