Do not confuse the symptoms of coccidiosis in chickens with necrotic enteritis!

The differential diagnosis of intestinal diseases in birds can often be complex. Therefore, it is necessary to know how to distinguish between the characteristic signs of each disease. The symptoms of coccidiosis in chickens and those of necrotic enteritis are apparently similar; hence, it is crucial to know how to differentiate them, and consequently to make the appropriate decisions for their control. 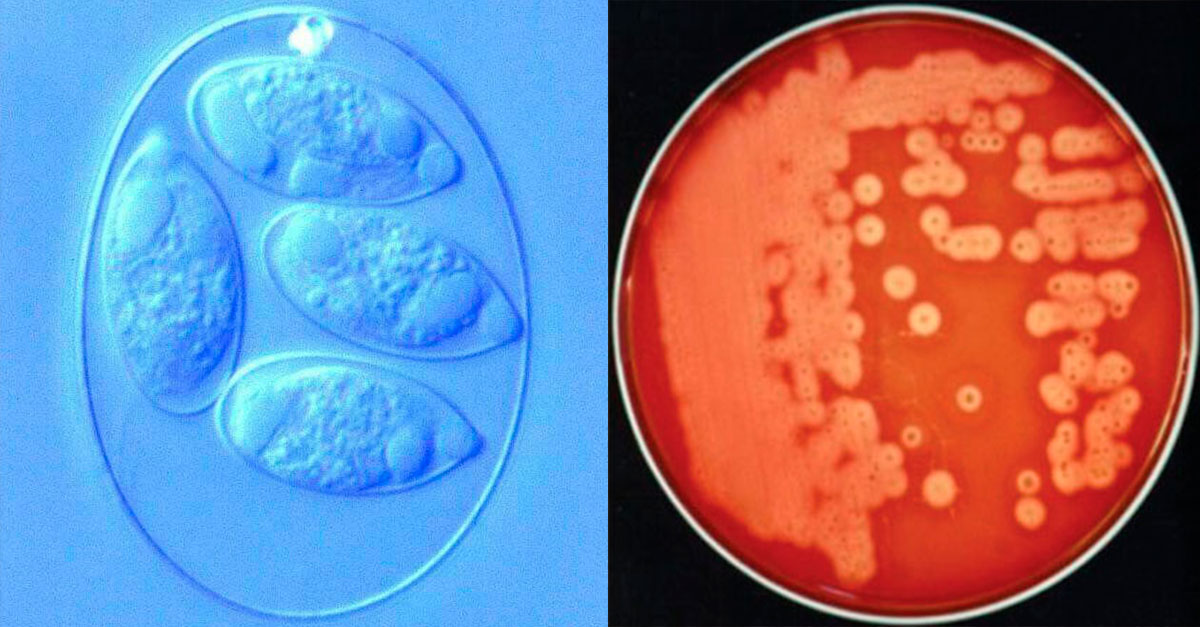 Coccidiosis or necrotic enteritis? Macroscopic diagnosis is often not easy.

In recent years, due to the increase in resistance to antibiotics, all sectors of the veterinary profession have had to limit their use as a prevention tool for certain pathologies.

In poultry farming, this fact has led to an increase in certain pathologies, such as necrotic enteritis.

For this reason, the problems caused by this disease have been ranked as one of the two main concerns of poultry producers and veterinarians, along with the symptoms produced by coccidiosis in chickens.

Previously, in this blog, the close relationship that both pathologies can have was discussed (April, 2019), being favoured the development of necrotic enteritis due to the previous or simultaneous presence of a clinical or subclinical coccidiosis (Porter et al., 1998).

However, the aetiology of both diseases differs greatly and, consequently, the way of treating each of them is different. Owing to this, differential diagnosis is highly important and special care must be taken to perform it correctly.

At field level, one of the most useful tools for the diagnosis of both diseases is the performance of necropsies to evaluate the lesions present in the gut level.

The pathological signs of those Eimeria spp. which cause coccidiosis have been described in previous posts (October 2016); these will be of great help in differentiating this disease from necrotic enteritis.

It is of particular interest to look at Eimeria maxima, since this species of Coccidia will be the one that can most commonly generate doubts in the differential diagnosis with Clostridium perfringens, the causal agent of necrotic enteritis.

Examination of the outer wall of the intestine

When starting the necropsy and externalising the gut of the bird, it is necessary to focus on the region corresponding to the duodenum and the mid-intestine, especially the latter, since it is where more confusion can be generated between the diagnosis of the symptoms of coccidiosis in chickens and necrotic enteritis.

For example, in the case of necrotic enteritis, a distended intestine is observed due to the presence of gas it contains, in addition to a thinning of the intestinal wall.

On the other hand, in the case of coccidiosis, this gas production will not exist in its pathological process. Furthermore, in the case of an infestation by Eimeria spp., the intestinal wall is usually thickened.

Another point to consider will be the petechiae that can be observed in the external part of the intestinal wall. If reddish dotting is observed, this sign may indicate that small haemorrhages are taking place at a considerable depth in the wall of the gut, corresponding to the replication foci of Eimeria spp oocysts. 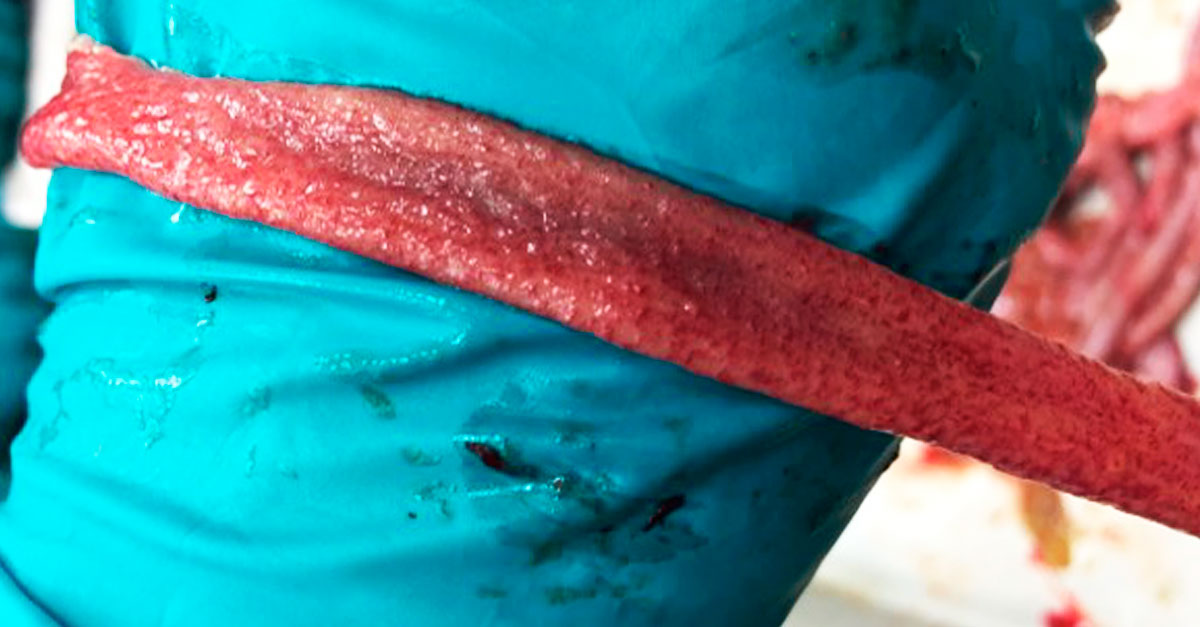 Examination of the mucosa and intestinal contents

By accessing the lumen of the intestine, we can also assess the thickness of the wall. If it is necrotic enteritis, we shall usually find a watery or pasty content in the lumen of the gut, coming from poorly digested feed, in addition to observing gas bubbles.

If the bird is affected by coccidiosis, as it could be seen externally, the thickness of the intestinal wall will be increased compared to the normal thickness, due to the inflammation produced.

The intestinal content can become mucous, creamy or bloody, depending on both the degree of severity and the species of Eimeria spp., in addition to an orange coloring in some cases (common in E. maxima).

In severe outbreaks of necrotic enteritis, it will be possible to observe a mucous surface characterised by a brownish colour and a very rough shape, similar to that of tree bark; this lesion is popularly called a “Turkish towel” (its appearance is also reminiscent of the rough surface of a towel). 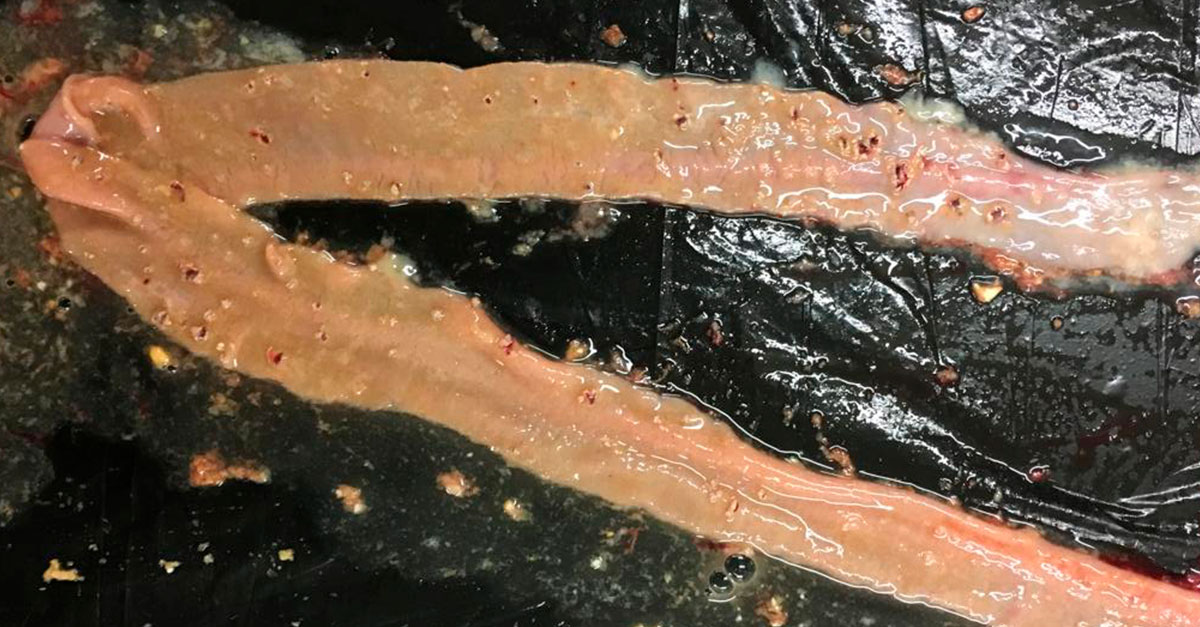 Necrotic foci with haemorrhages, rough mucosa, and gas in a bowel affected by necrotic enteritis.

At the level of intestinal mucosa lesions, to evaluate the degree of severity of the proliferation of Clostridium perfringens, it will be very useful to apply the lesion scoring of lesions developed by Lensing et al. (2010).

In this evaluation system, lesions are classified on a severity scale from 0 to 4, from lowest to highest incidence (4 corresponding to dead birds with symptoms). In this system, the number and size of necrosis foci present in the mucosa are analysed. 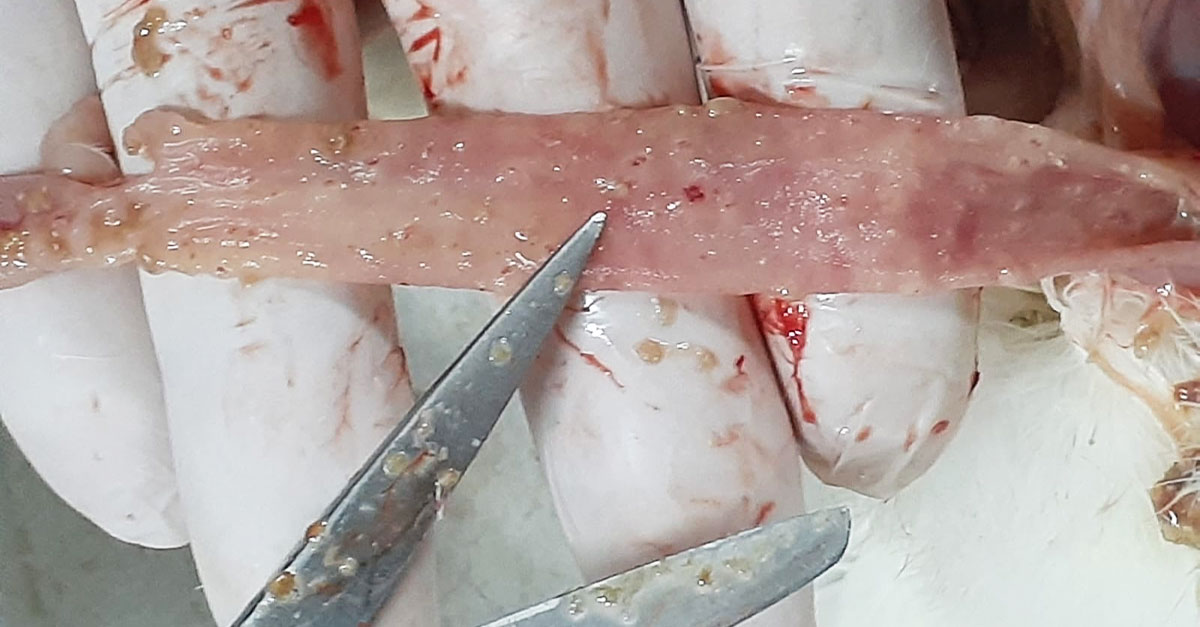 It should be noted that, on occasions, it will be necessary to differentiate between the white lesions caused by replications of E. acervulina oocysts, which are more delimited and smaller in size, and those of necrotic enteritis, which are wider and with more diffuse limits.

When there is proliferation of C. perfringens, not only the aforementioned foci of necrosis, but also petechiae, can be found in the intestinal mucosa. Care must be taken not to confuse these petechiae, which are more superficial, with the deep ones produced by E. maxima.

In the case of coccidiosis, these will be characterised by being small and deep lesions (petechiae), of a dotted type that can even be observed through the intestinal wall (as previously mentioned). In the case of necrotic enteritis, the bloody lesions will be more extensive and superficial (haemorrhages).

Apart from the diagnosis of lesions, there are other complementary techniques to check the status of the birds for each disease.

In the case of coccidiosis, the oocyst count in faeces and litter (April 2020)  can offer valuable information about the parasite load of the flock. Conversely, in the diagnosis of necrotic enteritis, a Gram stain of the mucosal scraping or a bacterial culture will be useful.

Of course, the more frequently this differential diagnos is made between the signs of necrotic enteritis and the symptoms of coccidiosis in chickens. The more experience will be gained and the greater the likelihood of success in distinguishing between them.

Finally, it should be noted that immunisation against the different species of Eimeria spp. by using precocious attenuated vaccines will be a very useful tool for avoiding the symptoms of coccidiosis in chickens and, consequently, reducing the cause-effect relationship between coccidiosis and necrotic enteritis.

Renewed app to give traceability to the vaccination process: another tool for coccidiosis prevention