Coccidiosis in chickens is a gut health issue: looking for a beneficial combination of vaccines & probiotics (Part II)

In the first part of this post, we saw that the joint administration of  two  vaccines for coccidiosis in chickens -EVALON® and HIPRACOX®- together with probiotics is feasible with a vaccination spray device that ensures accuracy and precision -Hipraspray® device-. In this second part, we assess the added protective effect of the synbiotic PoultryStar® in broilers vaccinated against coccidiosis with HIPRACOX® and challenged with a coccidia species mixture at day 15. 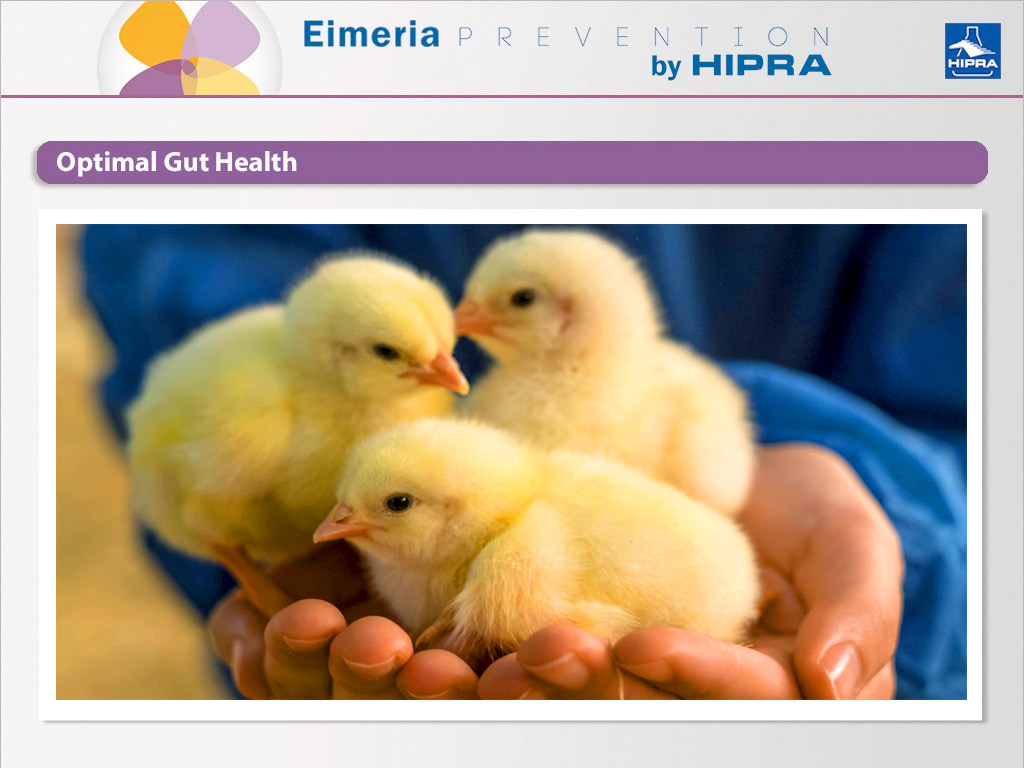 Optimal gut health represents the basis for the ever-increasing need to reduce antibiotic & anticoccidial use.

456 day-old male broilers of the ROSS 308 breed were housed for a 35-day grow-out in floor pens covered with wood shavings.

The commercial feed contained neither antimicrobials nor anticoccidial additives. The animals were divided into 3 treatment groups of 152 animals with 8 replicates per group (see Table 1).

On day 15, the birds in the IUC and HCPS groups were challenged with pathogenic strains of Eimeria isolated in Germany at 1ml/bird.

On days 21 and 22 (6 and 7 days post-challenge), 2 birds per pen were selected randomly, weighed individually and euthanized humanely. The lesion scores were assessed for E. acervulina, E. maxima and E. tenella using the method of Johnson & Reid (1).

The total lesion score was calculated as the sum of the lesion scores in the three intestinal segments (duodenum, mid-intestine, caecum).

Faeces samples were collected from each group for the oocyst count per gram (OPG) on days 6 and 7 post-vaccination and 7 and 14 days post-challenge.

Productive parameters were recorded as shown in Table 2.

The statistical analysis methodology was consistent with that outlined in the WAAVP guidelines for evaluating the efficacy of anticoccidial drugs in chickens and turkeys (2). Statistical significance was assessed at p ≤ 0.05.

Fig. 1 shows the total mean coccidiosis score per study day and group. On day 21, a significant difference in lesion score was detected between the IUC and the HCPS group, with the HCPS birds showing significantly lower lesion scores compared with the IUC group (p=0.01).

On day 22, on the other hand, the lesion score for the HCPS group was numerically lower than for the IUC group, but this was not statistically significant. 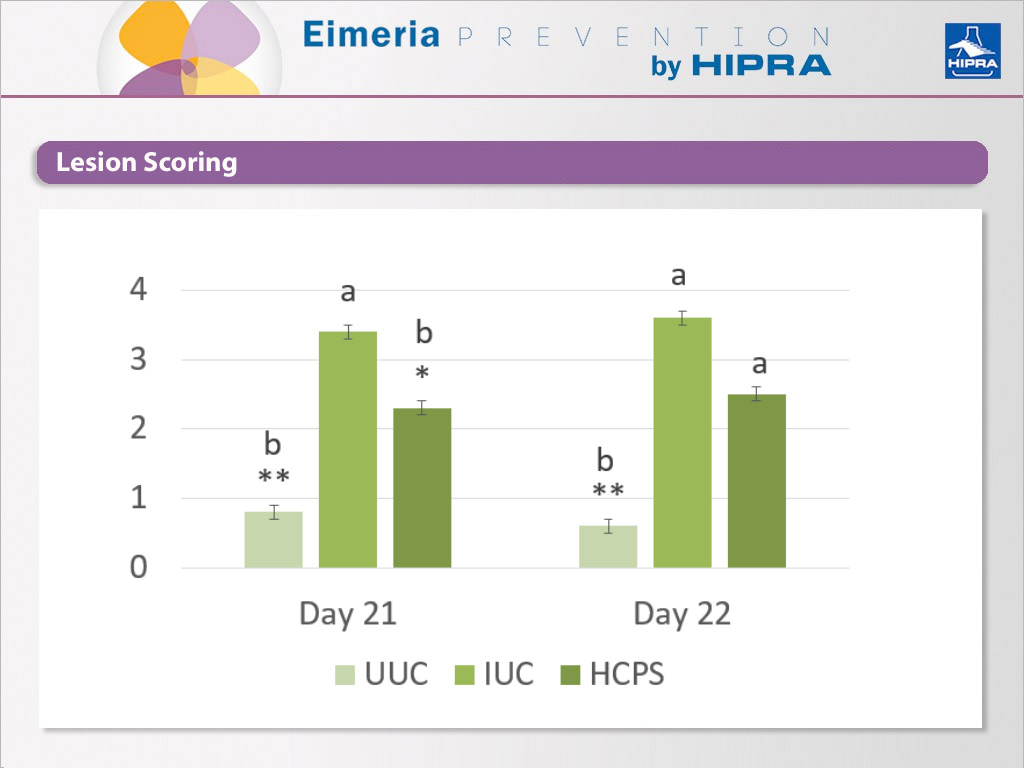 Fig. 2 shows the OPG in oocysts per gram per group and study day. The IUC group shows zero OPG counts on days 6 and 7 with a pronounced increase on day 22 (143,000), as this was the untreated challenge group.

Similarly, the UUC group showed zero oocyst production on days 6 and 7 together with some OPG output on days 22 and 29, revealing that – after the challenge – cross-contamination also occurred in the untreated, unchallenged birds.

Then, on day 22, oocyst output is less than half (67,600) of the level shown by the IUC group, revealing that birds were already immunized against coccidiosis in chickens and well protected at the time of the challenge, and on day 29 the OPG level was as low as that of a flock that is no longer shedding oocysts thanks to immunization. 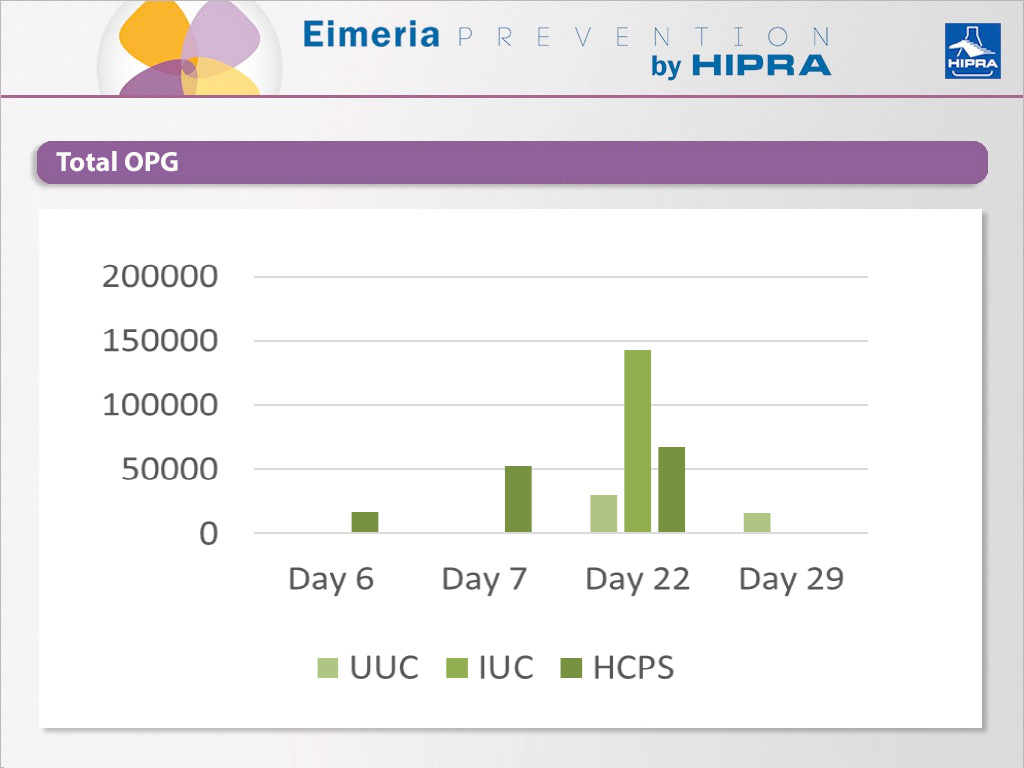 Even if the difference is not statistically significant, the mortality in the HCPS group was numerically far lower than in the IUC group (Fig. 3). 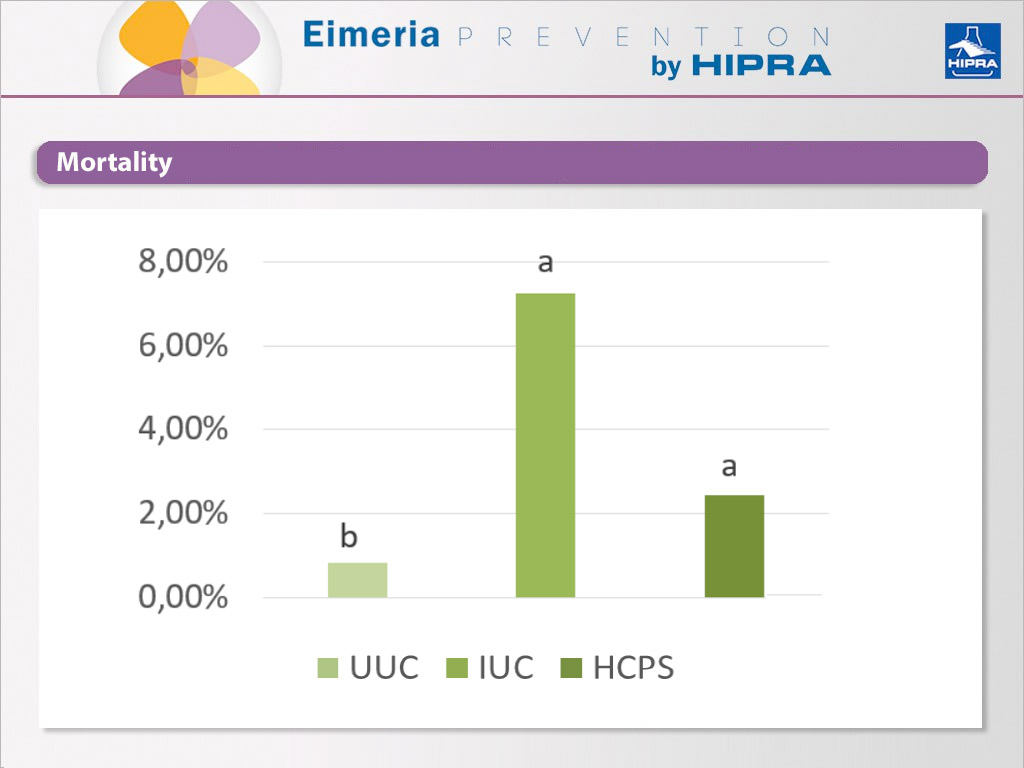 No significant differences were observed amongst the three groups with regard to daily feed intake. However, daily weight gain was significantly better in the UUC and HCPS groups (Fig. 4). 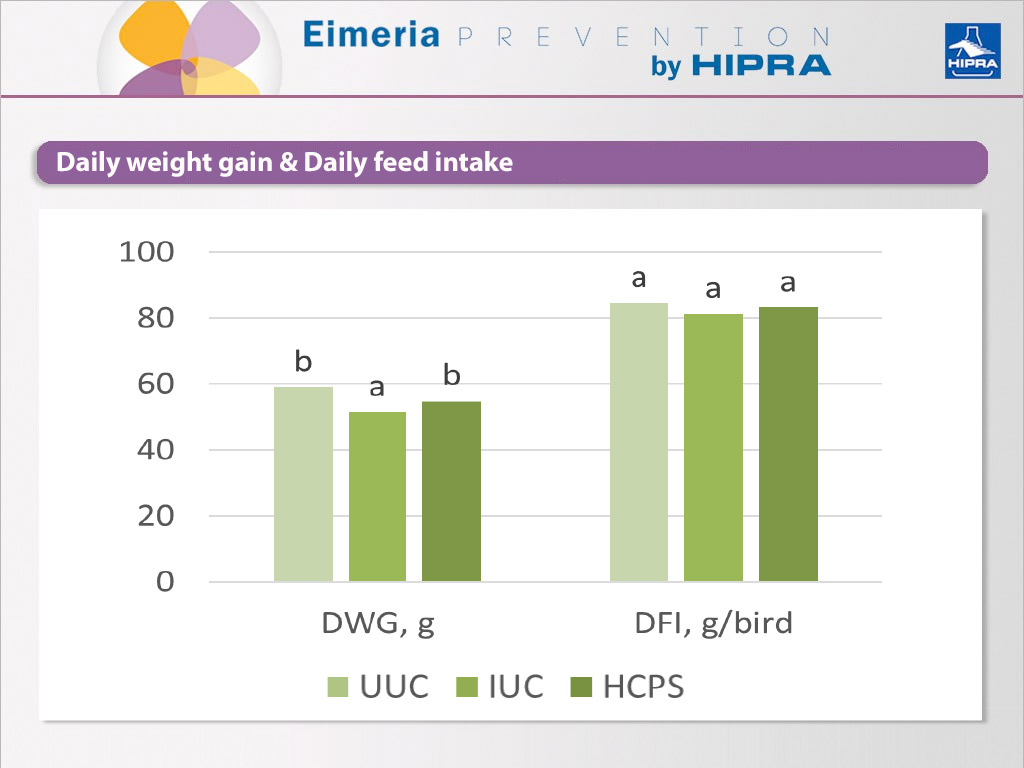 Fig. 4. DWG (g), DFI (g/bird).a-b Means that do not have the same superscript as the IUC group differ significantly (p ≤ 0.05) from this reference group.

Overall, the HCPS group and the UUC group gained significantly more weight than birds in the IUC group (Fig. 5). 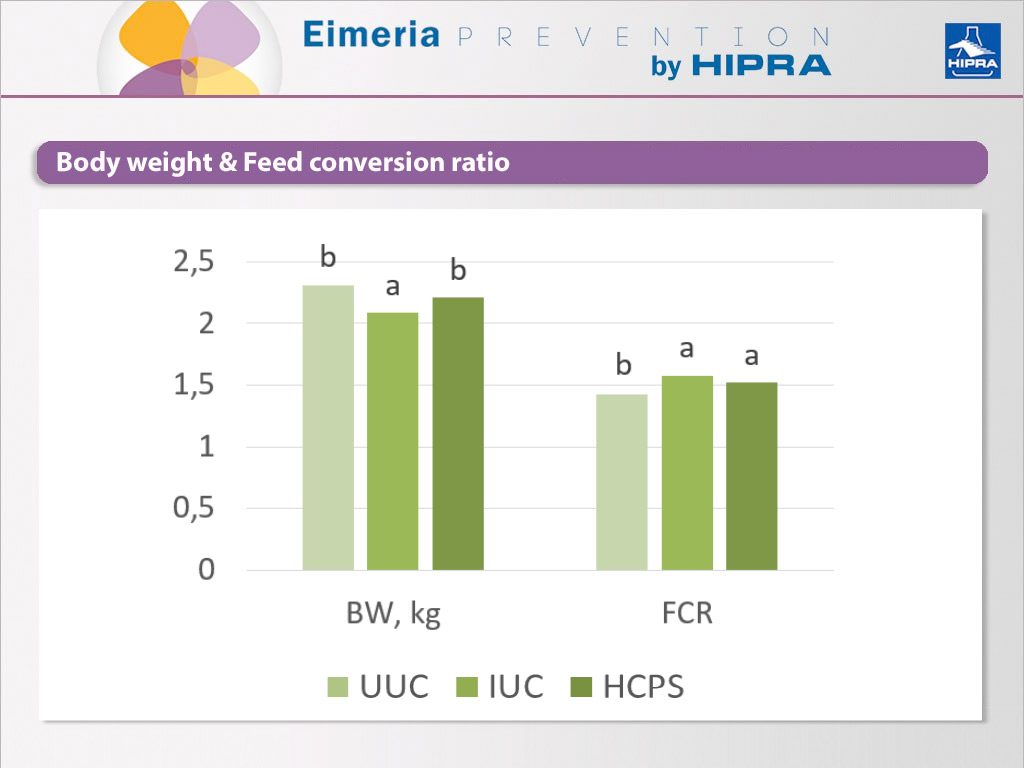 Fig. 5. Body weight (kg), feed conversion ratio.a-b Means that do not have the same superscript as the IUC group differ significantly (p ≤ 0.05) from this reference group.

In this study, the added protective effect of a synbiotic was noticeable in broilers vaccinated against coccidiosis:

In conclusion, the results of this study showed that the combination of HIPRACOX® and PoultryStar® had a positive impact on the zootechnical performance of birds and on coccidiosis lesion scoring after experimental induction of coccidiosis in chickens.

This suggests a beneficial effect of the combination of HIPRACOX® and PoultryStar® on digestion and overall gut health.

The results of this trial were published in the poster session of the 55th Symposium of the Spanish Branch of the WPSA (AECA), Madrid, SPAIN.

Is Eimeria tenella the only species diagnosed in poultry coccidiosis?

Rotation strategy with vaccines against Eimeria: a way to improve productive results in broilers