Is Eimeria tenella the only species diagnosed in poultry coccidiosis?

On several occasions in this blog, we have talked about coccidiosis diagnosis, and we recently focused on the lesion scoring technique, which is certainly the most widely used method for diagnosing Eimeria tenella in the field. Let us carry out a brief review of all the posts published on this subject with a view to understanding how to make the most of each technique.

Wrongfully because the presence of oocysts cannot be interpreted as an outbreak of coccidiosis, as Eimeria oocysts are ubiquitous. 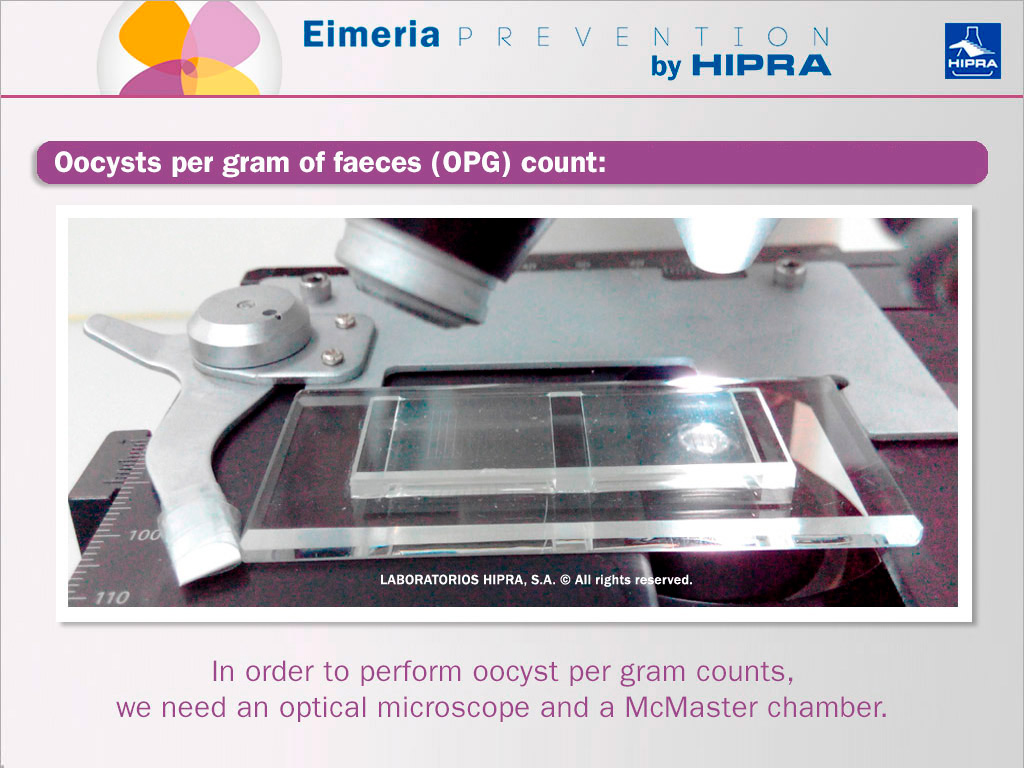 Therefore, the significance of this finding must be weighed against the level of oocysts/gram first and then other indicators of disease, such as the presence of clinical signs in live animals, as well as macro- and microscopic lesions in the intestine at necropsy.

OPG and morphometry are very useful when performed regularly (e.g. once per week) to follow up and monitor either the development of resistance of Eimeria field strains to anticoccidials (if this is the prevention strategy used in the tested house) or, after coccidiosis vaccination, to check the vaccination technique and the onset of immunity in the flock.

Being able to identify species like Eimeria acervulina, E. maxima and E. tenella in field samples using morphometry is relatively important, as we are able to diagnose these three species at an earlier stage on the basis of lesion scoring in the gut.

On the other hand, it is extremely important to be able to identify E. praecox and E. mitis, as these two species do not produce pathognomonic gross lesions, but are still able to cause subclinical coccidiosis (Williams et al. 2009).

Key points for counting oocysts and oocyst identification are correct homogenization of the sample before processing, weighing accuracy, use of the correct dilution factor and a microscopic observation method without artefacts.

With regard to the latter, samples need to be preserved in good condition: the shape of oocysts can be altered if the oocyst ages or sporulates over time, particularly when the temperature and humidity are favourable.

To avoid this, it is very important for samples to be kept under refrigeration until analysed. In this way, maturation is prevented and the number of atypical forms is reduced.

As shown in the image above, an optical microscope and a McMaster chamber is needed for performing oocyst per gram (OPG) counts.

Nowadays, with real-time PCR, it is possible to achieve accurate identification of the Eimeria species present in the sample as well as the quantity of each species (Nolan 2015), which is, for example, very useful for confirmation of diagnosis after the observation of typical gross lesions of E. tenella in the caeca, but it is vital to check for the presence of E. praecox and E. mitis, as already mentioned.

However, DNA-based methods such as PCR are used mostly to complete both OPG and morphological evaluation, especially in follow-up protocols after vaccination or when prevalence studies are conducted, but (as mentioned with regard to the aforementioned techniques), it loses its diagnostic value if not supported by clinical history, time of infection and signs and lesions observed.

Anyway, it is true that PCR overcomes some of the limitations of conventional methods, enabling more samples to be analysed in less time, increasing sensitivity, allowing qualitative and quantitative results in one step and even serving as a method to guarantee the identity and purity of strains present in vaccines (You 2014).

PCR along with OPG, morphological species identification and clinical judgement provides improved coccidiosis diagnosis based on a comprehensive approach.

In previous posts we have alreay explained what the main 3 key points for success in lesion scoring during a flock inspection using the Johnson & Reid (1970) method: selection of birds, necropsy procedure and training in lesion identification.

In addition, we know from the biological cycle of Eimeria that birds with lesions do not yet shed oocysts.

The entire Eimeria cycle usually takes 4-7 days depending on the species. This said, it is easy to understand why lesion scoring probably still represents the quickest way of diagnosing avian coccidiosis, and the way that allows diagnosis at the earliest stage, for at least those Eimeria spp. with pathognomonic lesions, such as Eimeria acervulina, E. brunetti, E. maxima, E. necatrix and E. tenella.

In conclusion, for a conclusive diagnosis of avian coccidiosis and precise information about which Eimeria spp. are involved, it is vital to use a diagnostic laboratory that is able to run, and has the skills to complement, all three of the aforementioned techniques. Because it is not just Eimeria tenella that causes avian coccidiosis.

What should we ask of a vaccine against Eimeria?

Coccidiosis in chickens is a gut health issue: looking for a beneficial combination of vaccines & probiotics (Part II)