Immunity against coccidiosis disease is tightly linked to the parasite life cycle. It is a complex cycle, with a combination of exogenous and endogenous stages that trigger a response by the host’s immune system.

However, Eimeria parasites have also been described as being highly elusive to the immune system, as well as producing chemokines that can slow or inhibit the host’s immune response (Jang 2011, Schmid 2014, Miska 2013). Eimeria spp. replication occurs inside intestinal cells; therefore, it has been proposed that the cell-mediated immune (CMI) response, regulated by type 1 T helper cells (Th1 immunity), plays a major role in protecting birds against coccidiosis infection (E. del Cacho 2011 and E. del Cacho 2012).

Coccidiosis immunity is species-specific, not being cross-protection between different species. Even different strains of the same species have a varied immunogenicity. Therefore, selecting the right strains to include in a coccidiosis vaccine is essential to get a good immunity.

Three consecutives infections and replications of wild or vaccine strains are needed to develop a protective immunity against Eimeria spp.

Although it is well known that live vaccines can induce adequate immunity against Eimeria spp. without being combined with an adjuvant, it is hypothesised that administering a coccidiosis vaccine together with the right adjuvant increases the vaccine’s efficacy, owing to the adjuvant’s capacity to polarise the immune response towards a Th1 response (Dalloul 2005).

EVALON® and EVANT® are both HIPRA´s live vaccines against avian coccidiosis; EVALON® is intended to protect breeders and laying hens and EVANT® is aimed to give protection to broilers. They are composed of attenuated strains of different species of coccidiosis parasite (Eimeria acervulina 003, E. brunetti 034, E. maxima 013, E. necatrix 033 and E. tenella 004 in EVALON®; Eimeria acervulina 003, E. maxima 013, E. mitis 006, E. praecox 007 and E. tenella 004 in EVANT®).

HIPRAMUNE T® is an exclusive solvent for both coccidiosis vaccines, EVALON® and EVANT®, which, between other characteristics, includes in its composition a Montanide-type adjuvant.

HIPRA firmly believes that immune modulation is crucial in providing strong, fast and long-lasting immunity against coccidiosis. So that is why HIPRA´s vaccines against Eimeria spp., as well as including strains that have been selected to maximise immunogenicity and minimise the side effects of Eimeria parasites, they are administered in combination with the adjuvanted solvent HIPRAMUNE T®.

In order to study the mechanisms by which an adjuvant could modulate the immune mechanisms that are triggered in the host after vaccination, some studies were performed, vaccinating birds with a live attenuated coccidiosis vaccine (EVALON®) at one day of age.

In the first trial, four treatment subgroups received EVALON®, in combination with or without the selected adjuvant, HIPRAMUNE T®, to study important markers of Th1 and Th2 responses. In birds that did not receive the adjuvanted solvent, it was replaced by a phosphate buffered solution (control group). Five birds from each subgroup were used to obtain intestinal lymphocytes from the mucosa and Peyer’s patches at different time points post-vaccination (7, 23 and 43 days p.v.). The lymphocytes were then incubated in appropriate medium and stimulated overnight with Eimeria whole antigen. Later, the lymphocytes were fixed and stained using monoclonal antibodies marked with fluorescein and studied with flow cytometry to detect lymphocytes producing IL-2, IFN-Ƴ, IL-4 and IL-10 (see Figure 1). 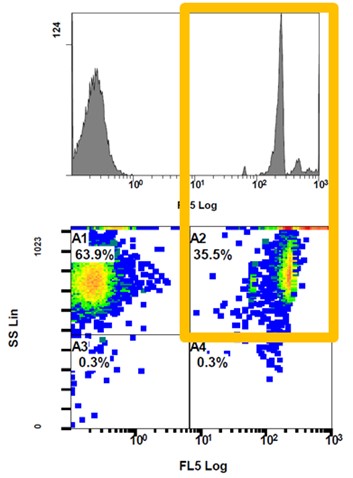 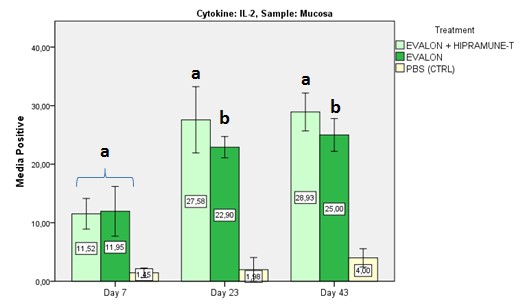 Figures 2a and 2b: Mean percentage of positive results for IL-2. Results obtained with lymphocytes isolated from the mucosa and intestinal Peyer’s patches. Superscripts (a, b) indicate statistical differences. 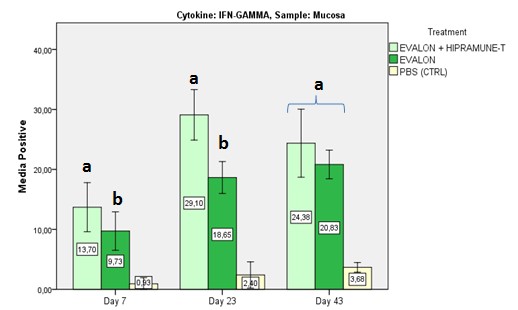 Figures 3a and 3b: Mean percentage of positive results for IFN-Ƴ. Results obtained with lymphocytes isolated from the mucosa and intestinal Peyer’s Patches. Superscripts (a,b) indicate statistical differences.

By contrast, the levels of IL-4 and IL-10 at days 23 and 43 were equal or lower when EVALON® and EVALON® + HIPRAMUNE T® were compared. These results, combined with the results recorded for IL-2 and IFN-Ƴ, confirm HIPRAMUNE T®’s ability to stimulate a cellular immune response (CMI). Therefore, it is hypothesised that EVALON® administered together with HIPRAMUNE T® is able to polarise the immune response towards a Th1 response with more intensity, as the study indicates, than the live vaccine without the adjuvant. As indicated, the Th1 response is crucial for protection against Eimeria spp.

In a second study to assess the ability of adjuvanted solvent HIPRAMUNE® T to provide a more extended protection throughout the Eimeria life cycle, the duration of immunity (DOI) of EVALON® was studied under laboratory conditions in facilities that impaired the introduction of external coccidiosis oocysts, and that do not favour reinfections. The DOI was evaluated during 60 weeks.

EVALON® was administered via coarse-spray together with the adjuvanted solvent HIPRAMUNE® T to 1-day-old chicks. A control group was inoculated with PBS. At 14, 28, 40 and 60 weeks post-vaccination a group of vaccinated and control birds were inoculated with separate Eimeria challenges using heterologous reference challenge strains (Figure 4).

For all the challenges performed, vaccinated groups showed a reduction in lesion scores (Figure 5), oocyst excretion and clinical signs compared to control groups. Weight evolution post-challenge was not affected in vaccinated animals.

Then, duration of immunity (DOI) of the vaccine EVALON® for all Eimeria species included in the vaccine was confirmed to be until 60 weeks.

We can conclude that this extended duration of immunity in conditions that do not favour reinfections is due to the fact that EVALON®’s efficacy is boosted by co-administration with the adjuvanted solvent HIPRAMUNE T®.

The path from ionophore drugs to vaccination as the only tool for coccidiosis prevention in broilers: How did Norway achieve this reality?

The steps to control coccidiosis disease caused by Eimeria spp.