Share on TwitterShare on Linkedin
Coccidiosis is a disease that cause huge economic losses in poultry production worldwide. Due to this, several companies and researchers investigated continuously in order to find the most appropriate strategy to fight this illness. At the same time that poultry production was industrialized, in the 50’s, the first coccidiostat was designed. However, these molecules showed concerns due to the appearance of resistances. Because of these, in 1952 it was developed the first vaccine against coccidiosis, but this was non-attenuated. In the 70’s, a new group of coccidiostats, called ionophores, were introduced in the market. Despite this development, the issues regarding resistances persisted. Thus, in the 90’s the first attenuated vaccine was developed, and, currently, all HIPRA’s coccidiosis vaccines are containing all the Eimeria species attenuated by precociousness (Atree et al., 2021). 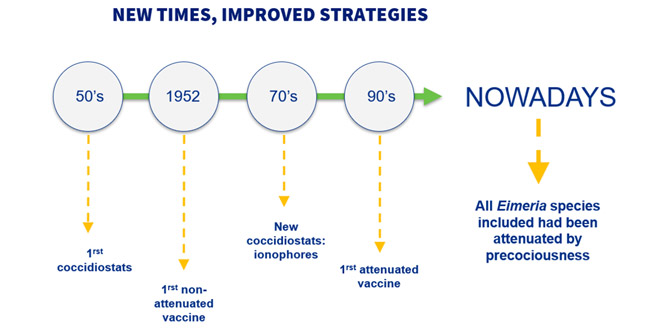 Types of vaccines for coccidiosis prevention

And, what does it mean precociousness? Can we consider that all Eimeria vaccines are similar? Not at all. As it has been described, the first developed vaccines where non-attenuated. These vaccines are based in including a concrete number of sporulated oocysts. These oocysts are keeping its natural virulence, and, if the environmental conditions are optimal, it is possible that they over replicate and generate a subclinical coccidiosis or even a clinical coccidiosis. This is one of the reasons why these type of vaccines as a coccidiosis prevention tool are not available in several countries (e.g.: European Union). Due to this, different methods had been developed in order to reduce this natural virulence of the vaccinal oocysts and obtain attenuated strains. An example of this is passing the oocysts through a chicken embryo. However, these obtained attenuated strains have the risk of coming back to virulence. Consequently, a method was developed in order to achieve attenuated strains without any risk of virulence: attenuation by precociousness. This is based in the genetic selection of the strains that will be part of the vaccine. And all the species included in vaccines had been attenuated through this method.

Attenuated by precociousness strains are selected by precociousness through passages on chickens (Jeffers, 1975). The process starts with selected non-attenuated field strains. In the first passage, the pattern of excretion of a wild strain of Eimeria can be high and delayed on time (the peak of excretion happens approximately from 28 days of live of the birds, depending on the species and the load of oocysts). In this process of attenuation, only the first part of excretion of oocysts in the faeces of one group of animals is collected for the inoculation in a subsequent group, free of oocysts from Eimeria. In a second passage, it is obtained again the first part of the oocysts excreted and subsequently inoculated in a new group of birds. This process of genetic selection of the oocysts by precociousness is repeated a different number of times to obtain the final strains used in the vaccines for coccidiosis prevention. As a result of this passages, the attenuation is achieved and, compared to the original parental strains, the pattern of excretion of these strains has changed. The peak has been reduced and the excretion will happen earlier.

Moreover, several passages had been done in order to check if the strains are able to come back to virulence. Thanks to the genetic selection, the characters had been fixed and there is no possibility of this strains being virulent again.  This method of attenuation differs of others, as passages through chicken embryo. If we observe the Eimeria life cycle, it is in the schizogony phase were the effect of using genetically selected strains is observed. These strains are producing less asexual replications, with a lower damage of the gut cells and providing the necessary immune response against coccidiosis.

Development of immunity through attenuated by precociousness strains for coccidiosis prevention 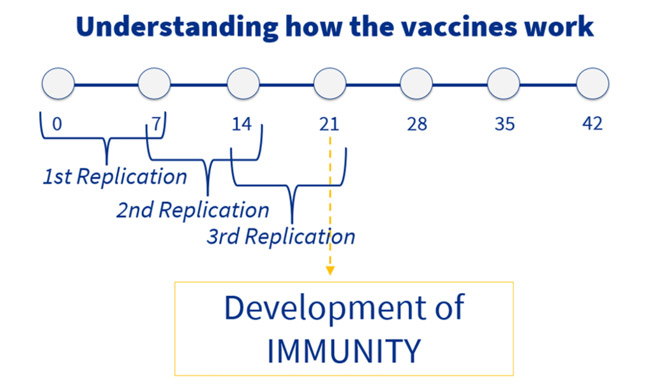 To summarize, the patterns of excretion in the litter will change depending in the used tool to control coccidiosis. In a coccidiosis outbreak, from 28 days on, the field strains are able to highly replicate, causing illness and important problems in the flock. 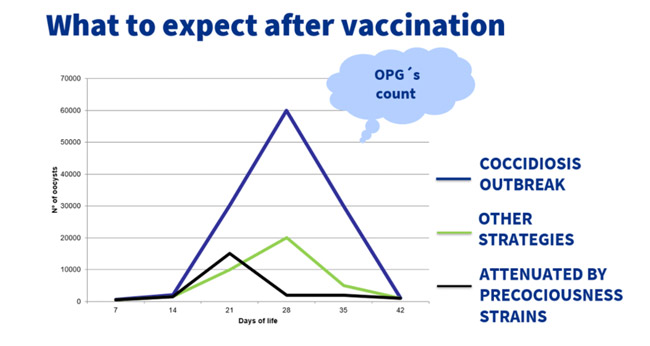 With anticoccidials or other vaccines non attenuated by precociousness, the peak of excretion is lower in comparison with the one of a coccidiosis outbreak. However, the peak is also possible from 28 days on and, with increasing resistances or an over replication of the non-attenuated vaccinal strains, the peak can rise up to concerning levels of clinical or subclinical coccidiosis. When using vaccines as coccidiosis prevention method, the excretion pattern gives a controlled replication of the vaccinal oocysts, with a mild and early peak, produced before the possible coccidiosis outbreak. The immunity is stablished earlier and before the possibility of suffering the illness.   REFERENCES:
Previous Post