Influence of coccidiosis in chickens on their pigmentation (experiences in Mexico)

In this article we analyse the effect that different factors, including coccidiosis in chickens, can have on the pigmentation of these birds. Indeed, in some countries, especially Mexico, but also in others such as China, the Philippines and Peru, the colouring of the skin of broilers is an important factor when consumers make their choice of bird, as they associate yellow and/or golden tones with good quality, fresh and healthy chickens.

The cost of achieving this pigmentation is considerable (it accounts for between 8 and 10% of the total feed costs). 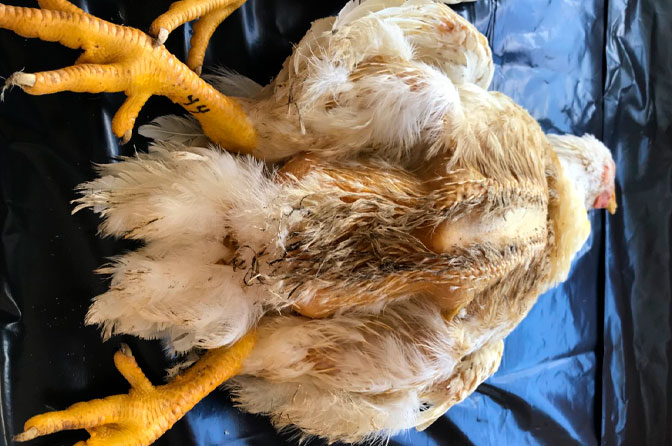 The absorption of pigment can be affected by many factors, including coccidiosis

Also, if the required values are not reached and/or there is a lack of uniformity, this incurs financial penalties in terms of the price of meat per kg when it is placed on the market.

This pigmentation is the result of the combination of yellow colours (lutein, zeaxanthin and cryptoxanthin) and in some regions reds (capsanthin and/or canthaxanthin), which together can produce a golden colour with a natural-looking appearance.

The mixture of pigmenting ingredients depends on the market for which the birds are intended, as well as the availability and price of the pigments.

Pigments are absorbed via the ciliary epithelium of the midgut and, for this to take place properly, a process of enzymatic hydrolysis of the xanthophylls, present in the diet in the form of fatty acid esters, has to occur.

Of course, this requires a very good state of health of the intestinal mucosa, which must be free of conditions such as bacterial enteritis or symptoms of coccidiosis in the chickens.

When they have been absorbed, they are transported via the bloodstream to the subcutaneous tissue, body fat, skin, beak and tarsus, where they are stored and saturation is increased until the desired pigmentation is achieved (Pérez-Vendrell et al, 2001).

More factors that can affect the absorption of pigment

There are many other factors that can affect the absorption of pigment, such as those relating to the diet itself (concentration, type and combination of xanthophylls; interaction of the xanthophylls with other ingredients, especially fats; toxic factors such as mycotoxins, etc.), feeding programmes, installations (Brown out systems show lower levels of pigmentation), genetic line (some have limited or no capacity to achieve saturation levels of pigment), sex (females acquire pigment better than males) and diseases, not only those that reduce feed consumption (and therefore ingestion of xanthophylls)

But also, as mentioned earlier, those which can cause intestinal damage (coccidiosis in chickens, bacterial enteritis, etc.), as the absorption of xanthophylls is directly linked to intestinal health and integrity (Ortega et al, 2012).

Speaking specifically about coccidiosis in chickens, as we have already mentioned, this is one of the most important factors that can affect pigmentation. And more specifically, Eimeria acervulina, E. praecox. E. mitis and E. maxima, as these species cause desquamation and shortening of the villi of the intestinal mucosa and parasitise the sites of greatest pigment absorption in the intestine of the birds.

Furthermore, Eimeria maxima is the principal predisposing factor to another major disease that can affect intestinal integrity and the absorption of pigment: necrotic enteritis caused by the bacterium Clostridium perfringens (Williams, 2005). 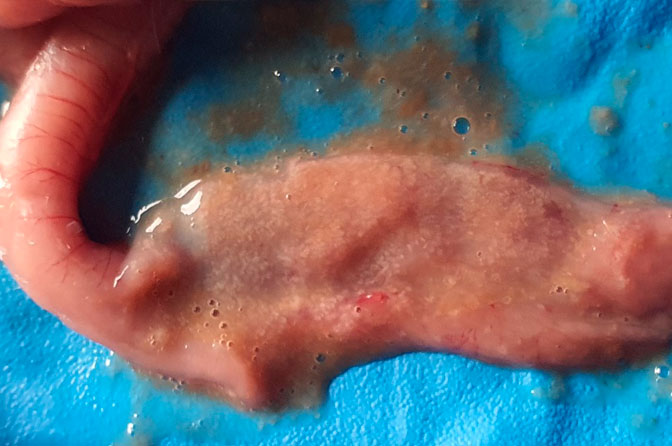 This is why it is essential to obtain a good level of protection if we want to avoid the symptoms of coccidiosis in chickens and achieve the desired parameters in terms of pigmentation.

Problems in birds treated with coccidiostats

The most widely used method for the control of Eimeria spp. is the use of coccidiostats in the feed.

However, the addition of these is becoming more and more restricted around the world and, furthermore, their consecutive and prolonged use is resulting in the emergence of strains of the parasite that are resistant to their activity; this means that more and more problems are being seen in birds treated with coccidiostats, which are showing problems of pigmentation, a consequence of subclinical coccidiosis and subsequent deterioration of intestinal health.

Prevention of coccidiosis in chickens: vaccination

As the main alternative, the use of live attenuated vaccine against coccidiosis (EVANT®) has been shown to be a very effective option for the prevention of coccidiosis in chickens, both developing immunity against the disease and replacing the field strains which are resistant to coccidiostats with their own strains (Ronsmans et al, 2015).

The graph below shows the improvement in the level of pigmentation achieved in chickens with the use of a coccidiosis vaccine attenuated for precociousness (HIPRACOX®), compared with the records of birds treated with coccidiostats in previous years 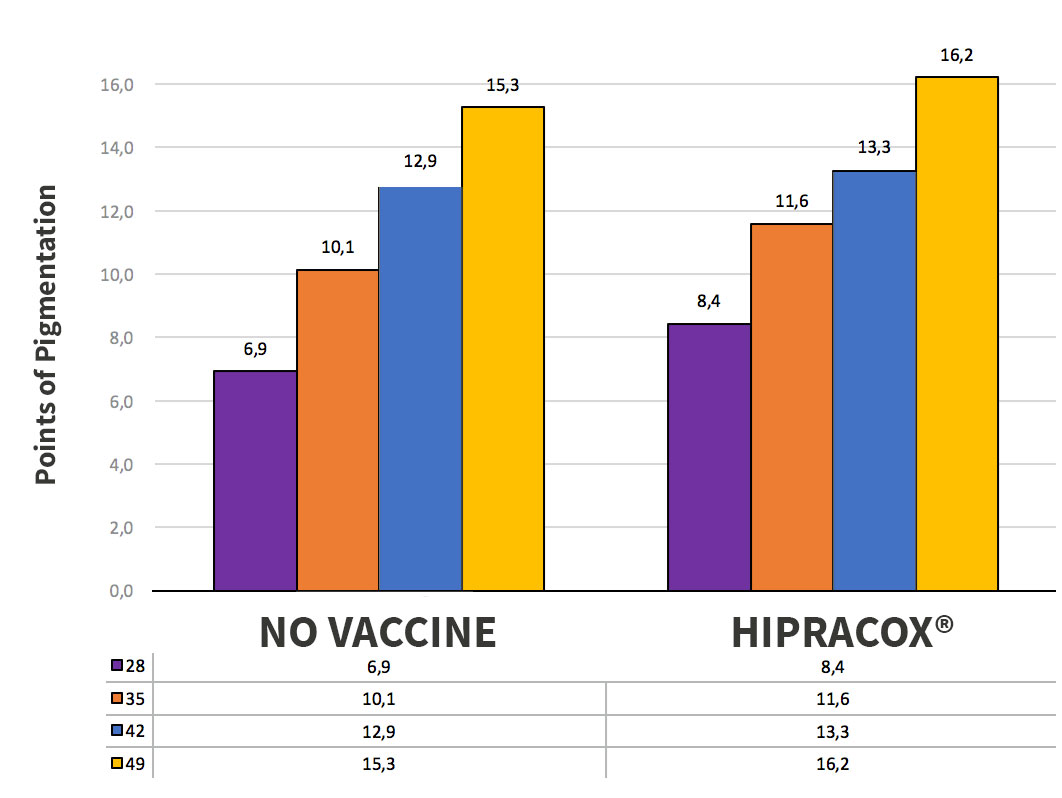 Moreover, if vaccines are used that include strains that are attenuated for precociousness, characterised by their low level of replication (with hardly any micro/macroscopic lesions), the harmful effect on intestinal integrity and health can be avoided, and therefore also an effect on the absorption of pigment, which is commonly associated with the use of vaccines based on non-attenuated strains.

Coccidiosis prevention: from hatcheries to producers

Are we sure that it is always the right time for coccidiosis treatment?