Coccidiosis in chickens is a Gut Health issue: Benefits of combining vaccines & probiotics (Part I)

When we talk about coccidiosis in chickens, we should not forget to mention gut health, as whatever provokes a disruption of gut balance can also influence this disease or the other way around. In view of this strict interconnection and taking into account the fact that optimal gut health represents the basis for the ever-increasing need to reduce antibiotic & anticoccidial use, it is easy to understand that nowadays the “Silver Bullet” would be to find the perfect combination between coccidiosis vaccines & feed additives intended to maintain gut balance, such as probiotics. This combination should guarantee the best coccidiosis prevention through vaccines, together with optimal gut health and competitive productive results. 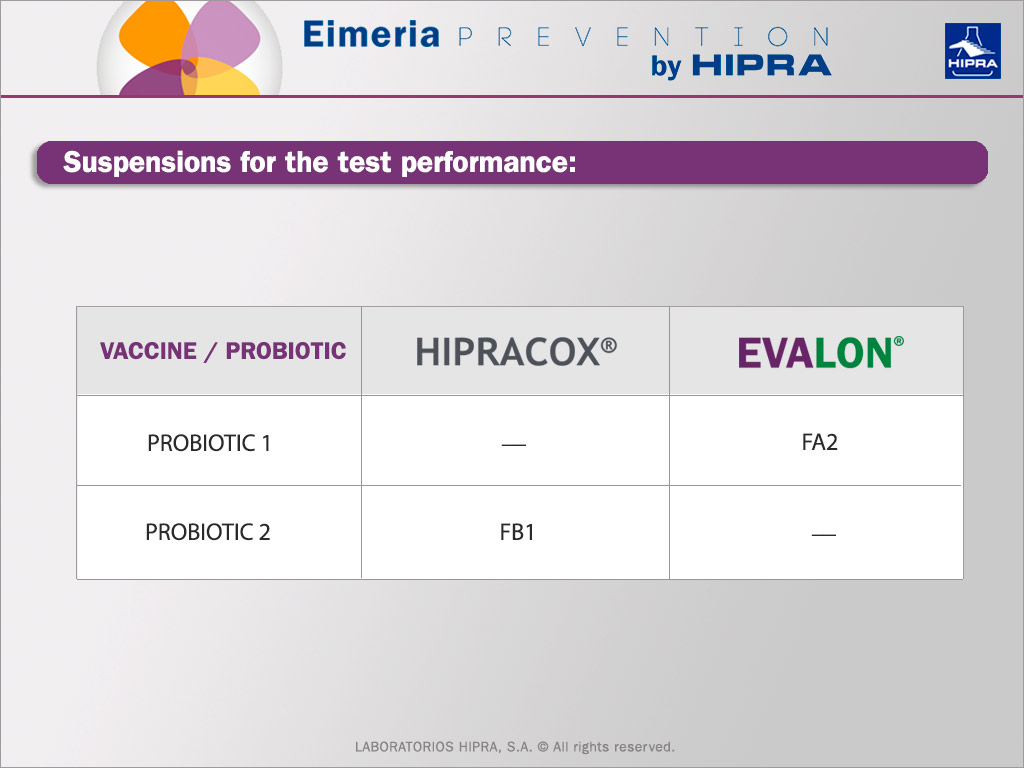 Before evaluating whether the combination of vaccines for coccidiosis in chickens plus probiotics is beneficial from the intestinal health point of view, we had to investigate the possibility of administering EVALON® and HIPRACOX® vaccines, each together with a different probiotic, using Hipraspray®.

The main aim was that for an estimated period of 2 hours, the suspension of vaccine for coccidiosis in chickens should not show either lumps or deposits in the container that could impede correct vaccination. To determine whether the products were applied correctly together with the vaccines, an oocyst count was carried out from the sprays administered through the Hipraspray® nozzles.

The suspensions in the table above were prepared for the performance of the test.

The two vaccines for coccidiosis in chickens were prepared according to the SPC with their corresponding colouring agents and immunomodulator – Hipramune® T- in the case of EVALON®, with the addition of the corresponding quantity of probiotic to the vaccine suspension.

For the collection and analysis of the samples, each sample taken during the vaccination process was collected in triplicate from the nozzles, at the start of the process, at some point in the middle and at the end of the process. Then, an oocyst count/ml of the samples was carried out in a Fuchs-Rosenthal chamber. As previously mentioned, the process of administration of the vaccine suspension was carried out using the Hipraspray® device. For this, all the steps in the device set-up procedure were followed as well as cleaning and priming the device for each of the vaccine preparations.

One of the main concerns expressed before carrying out the test was to see how the vaccine suspension would appear once it was constituted with the probiotic. As shown in the picture below, the dilution of probiotic 1 with the EVALON® vaccine suspension is completely normal and does not alter the density or colour of it in any way. In addition to which, the mixture is completely homogenous. 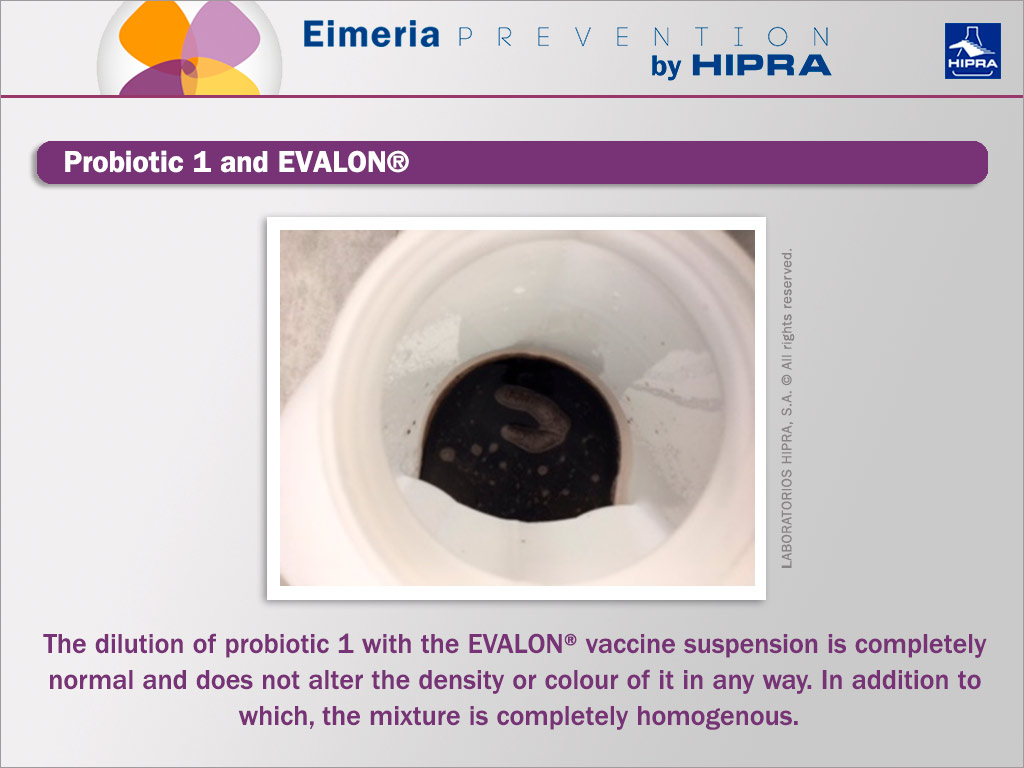 Sampling in triplicate allowed a statistical analysis to be carried out of the results, showing that there were no statistically significant differences during the administration of the vaccine suspension over the period of time with PROBIOTIC 1 plus EVALON®. 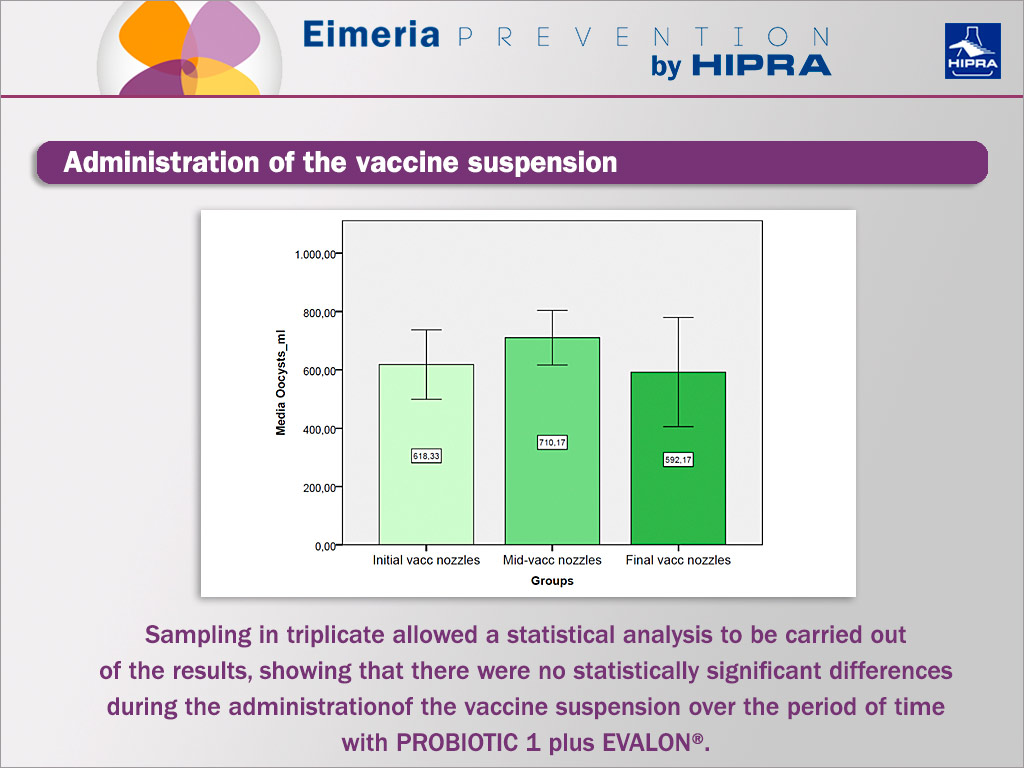 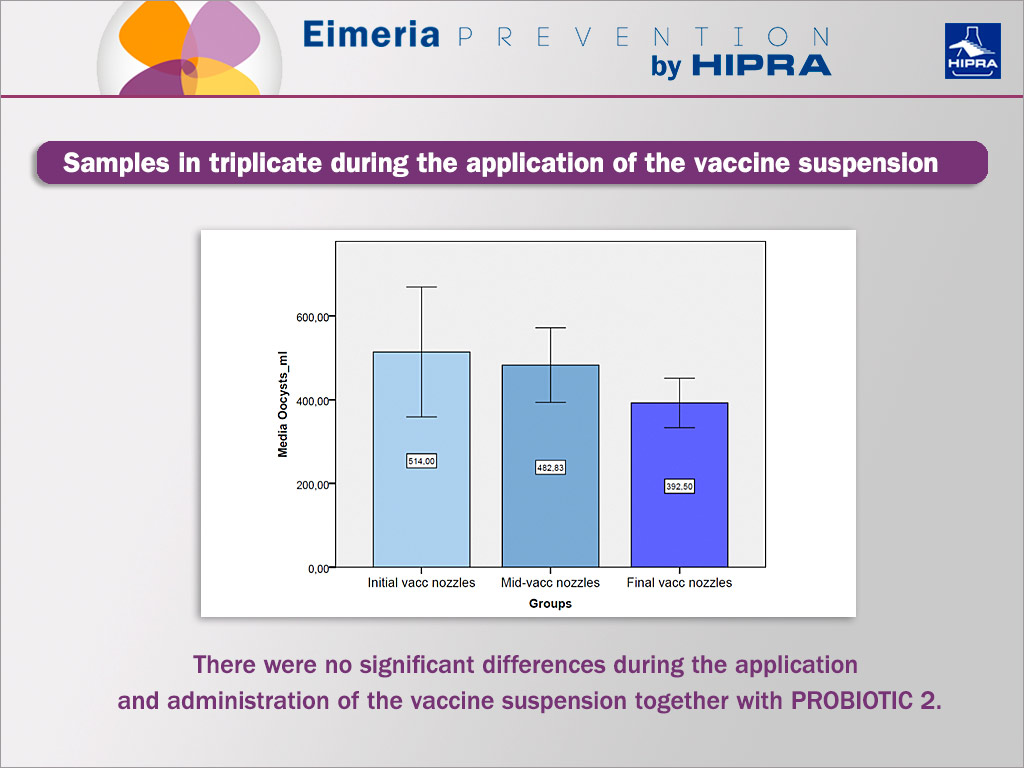 As with the previous administration, there were no significant differences during the application and administration of the vaccine suspension together with PROBIOTIC 2.

With this simple study, it can be concluded that the joint administration of the EVALON® and HIPRACOX®, vaccines for coccidiosis in chickens, together with probiotics is possible and feasible with an administration system such as Hipraspray®, the continuous administration of oocysts not being compromised throughout the vaccination process and there being no negative interference with the proper functioning of the device, as the nozzles do not become clogged or obstructed.

Lesion scoring technique for Eimeria in chickens: An indicator for successful diagnosis

Eimeria species involved in avian coccidiosis: Who claims 7 and who claims 9?

In poultry production, there are multiple zootechnical parameters that are constantly evaluated in order to ensure that the full productive...

The Eimeria species that cause avian coccidiosis are present virtually everywhere in the world where there is poultry farming. However,...

Eimeria species involved in avian coccidiosis: Who claims 7 and who claims 9?

We use cookies on our website to give you the most relevant experience by remembering your preferences and repeat visits. By clicking “Accept”, you consent to the use of ALL the cookies. Read More

__cfduid
Domain: .freegeoip.live
Description: The cookie is used by cdn services like CloudFare to identify individual clients behind a shared IP address and apply security settings on a per-client basis. It does not correspond to any user ID in the web application and does not store any personally identifiable information.
Duration: 1 years 30 days

cookielawinfo-checkbox-necessary
Domain: eimeriaprevention.com
Description: This cookie is set by GDPR Cookie Consent plugin. The cookies is used to store the user consent for the cookies in the category ''Necessary''.
Duration: 1 years 19 days 15 hours 19 minutes

cookielawinfo-checkbox-non-necessary
Domain: eimeriaprevention.com
Description: This cookie is set by GDPR Cookie Consent plugin. The cookies is used to store the user consent for the cookies in the category ''Non-necessary''.
Duration: 1 years 19 days 15 hours 19 minutes

_gid
Domain: eimeriaprevention.com
Description: This cookie is installed by Google Analytics. The cookie is used to store information of how visitors use a website and helps in creating an analytics report of how the wbsite is doing. The data collected including the number visitors, the source where they have come from, and the pages viisted in an anonymous form.
Duration: 1 years 19 days 15 hours 21 minutes