Share on TwitterShare on Linkedin
Depending on the type of production or government rules relating to antibiotic-free product labelling and trade, there will be restrictions on the use of certain products, especially for the treatment of infections or coccidiosis control. Sick flocks should be treated or sacrificed, in order to comply with welfare regulations. 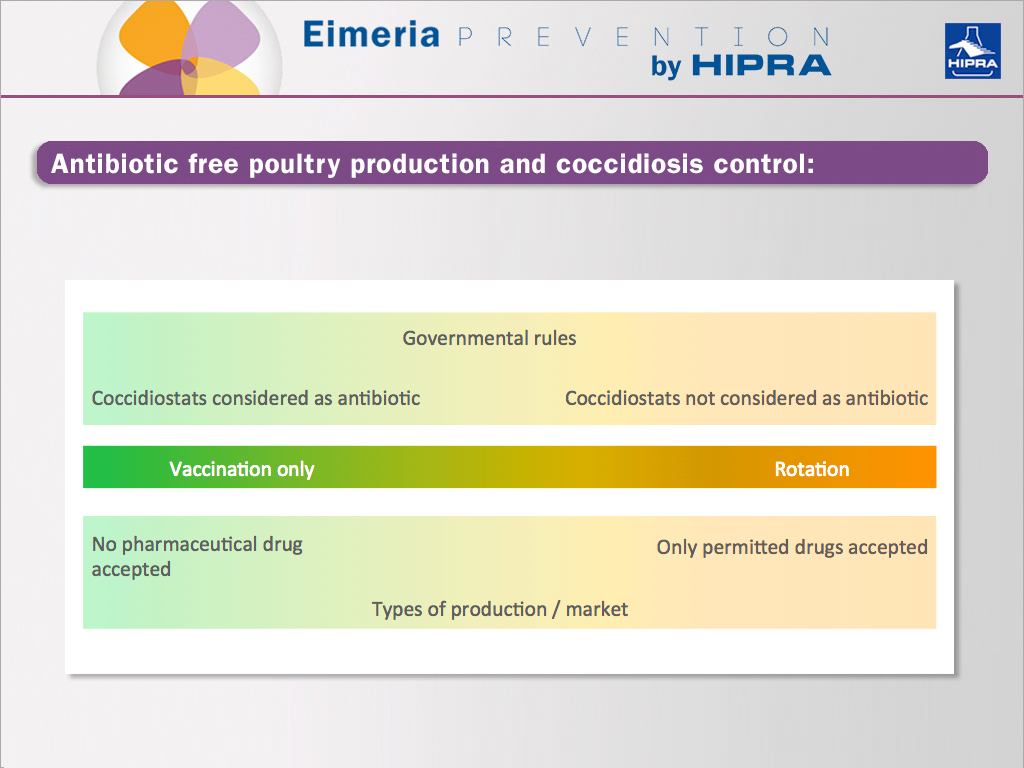 The OIE list contains the classification for antimicrobial agents of veterinary importance. Drugs for human consumption only are not in this list. For bacterial infections, antibiotics can be used for treatment of sick flocks, but the type of antibiotic is restricted, and authorization of its use is based solely on a confirmed diagnosis and certain criteria relating to bacterial resistance. Some antibiotics will be prohibited for animal use, keeping some drugs in reserve for human use only. Treated flocks cannot be sold as antibiotic-free. For coccidiosis control, some countries permit the use of products such as ionophores. Molecules of this type are not considered to represent a high risk for the development of microbial resistance, and they are not used in human medicine. They are therefore authorized for use livestock for Eimeria control. In other countries, however, or in some strict markets, they are not allowed, because they are considered to be a pharmaceutical drug. So, if the intention is to raise broilers antibiotic-free, and for this claim “antibiotic-free” also means no ionophores, coccidiosis control in poultry will change. The use of vaccines must be considered. Any coccidial vaccine is a biological product, and it is therefore not considered to be an antibiotic. Vaccines against coccidiosis are widely used in breeders and commercial layers rose in floor systems. The use of vaccines in broilers is not yet widespread. For companies with 100% antibiotic-free production, it can be the only alternative for coccidia control. Companies with different products (antibiotic-free and conventional) could use rotational programmes – some flocks with conventional coccidiosis control programmes and some flocks with vaccines. This type of programme has the advantage of increasing susceptibility to the anticoccidials used, after some flocks raised on the same farm receive the vaccine. The flocks treated with the vaccine can be sold as antibiotic-free. In conclusion, there are several versions of antibiotic-free broiler production, depending on the country rules and targeted markets. This is important in coccidia control, because it is directly affected by whether some drugs are considered to be an antibiotic or not.
Previous Post

Antibiotic free: what does it mean and what to deal with coccidiosis in Poultry? (Part I)

Hipraspray®: the development of an Eimeria vaccination device for poultry