The other symptoms of coccidiosis in chickens: changes in productive performances

What indicators may make us suspect that we are suffering coccidiosis problems in our poultry farm? We should not rely only on the clinical symptoms of coccidiosis in chickens for the diagnosis of this disease. The presence of other changes can indicate that we are having problems with this disease.

The severity of coccidiosis disease is variable and will depend to a large extent on several factors, such as the specific species of Eimeria spp. that are involved, the field pressure (parasitic load in the farm houses), the immune response developed by the birds or the measures that we take to prevent and/or fight against it, inter alia.

Depending on these factors, we can deal with a clinical presentation of the disease, showing the characteristic symptoms of coccidiosis in the chickens, or a subclinical disease, being in this case more difficult to diagnose.

Nowadays, thanks to the experience gained and various diagnostic tools available to the veterinarian, it is possible to make a diagnosis of the clinical symptoms of coccidiosis in chickens (high mortality rates, characteristic intestinal lesions, watery/bloody faeces, etc.), by differentiating it from other similar disorders and making it possible to apply treatments and take preventive measures against future problems. 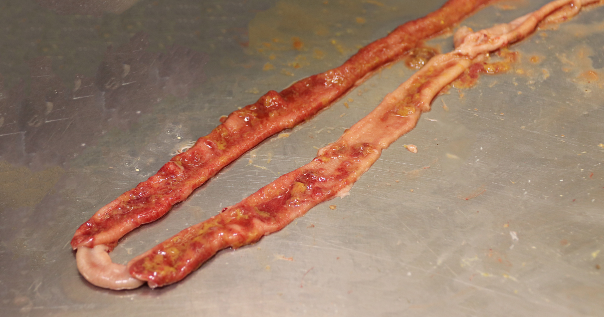 What if the typical symptoms of coccidiosis in chickens are not shown?

However, very often, the disease occurs in a subclinical form, without the characteristic symptoms of coccidiosis in the chickens, and this represents a challenge to the clinician.

In this case, it will be necessary to use other methods to identify the problem, such as the analysis of possible changes in productive parameters, which may indicate that this is the current situation.

In the case of subclinical coccidiosis, the replication of Eimeria spp. is lower and the lesions produced will be milder than in clinical coccidiosis, but it will be possible to observe some of the other symptoms of coccidiosis in chickens (relating to zootechnical performances) such as: increases in FCR, delay in BWG, loss of homogeneity of the flock, increase in drug consumption, etc.

A differential diagnosis with other possible diseases will be necessary, as these signs are not pathognomonic of coccidiosis.

However, they can be a good indicator that there is a problem of subclinical coccidiosis.

Because of the narrow profit margins in the sector, a slight worsening of these can mean the difference between a good or a bad flock of birds in production.

Subclinical coccidiosis due to resistances of Eimeria spp. against anticoccidial drugs

Up to now, the symptoms of coccidiosis in chickens (especially broilers), both clinical and subclinical, have mainly been controlled by anticoccidials.

These are effective and safe products with which to combat the disease, but it has been shown that their mechanism of action can lead to the development of resistances to them by the field strains of Eimeria spp. (Peek et al., 2003).

Resistance is defined as the capacity of a pathogen to survive and/or multiply despite the administration and absorption of the drug indicated for its treatment in the recommended or a higher dose (World Health Organization, 1965).

Resistances to anticoccidials are a key factor in the development of subclinical (and even clinical) coccidiosis in a flock of poultry.

The development of resistance will depend on the classes of anticoccidials that are used, the amount used and the rotations carried out between these products and others.

Despite the fact that the speed and intensity with which resistances are established varies, sooner or later it is very likely that the birds will present these problems

How do we detect them? After several production cycles with the same strategy against coccidiosis using anticoccidials, the productive parameters will progressively worsen.

Higher feed conversion ratios, lower average weight gains and even slight increases in the percentage mortality are some of the indicators that can be affected.

If the development of resistances is suspected, Lesion Scoring will be very useful in order to assess whether there are in fact symptoms of coccidiosis in chickens (Johnson & Reid, 1970).

Finding average lesion scores of between 1 and 2 against any species of Eimeria spp. (according to the Johnson & Reid scale) , despite the use of anticoccidials, is a clear indicator of resistance.

What can be done about it? There are various strategies such as: rotations with different products to those used up to now , introduction of essential oils with an anticoccidial action into the diet (for example carvacrol, saponins, etc.), which can be effective when used in combination with coccidiostats.

Another highly effective alternative that is more and more widely used is the use of live attenuated vaccines against Eimeria spp.

Specifically, live vaccines attenuated by precociousness have the capacity to replace resistant field strains with sensitive strains contained in them (Dardi et al., 2015 ), as well as protecting against the symptoms of coccidiosis in chickens.

Therefore, the use of this type of product for several consecutive cycles will considerably reduce the resistance that were being developed, with the possibility of the emergence of subclinical coccidiosis being reduced and productive parameters being improved as a result.

Counting Eimeria spp. oocysts: Why is this such a useful technique?