Rearing antibiotic-free broilers: It is possible while we vaccinate against coccidiosis in chickens

Prevention of coccidiosis in chickens with live vaccines means suspending the use of anticoccidials, but a reduction in other antibiotics has also been observed. Reduction in antibiotic use in animal production is currently one of the aims of the poultry industry. Antimicrobial resistance has become a global public health problem in humans and livestock and plans to reduce the use of antibiotics are being implemented by the authorities in most countries. 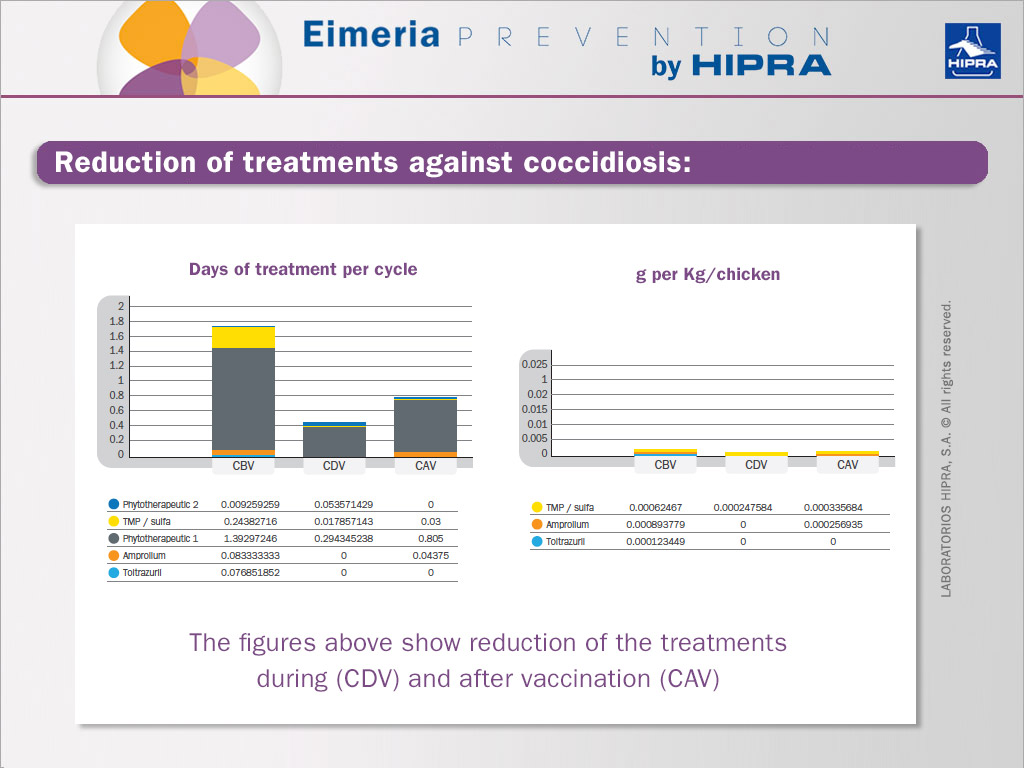 Obviously, chemicals and ionophores used to control coccidiosis should be considered as antibiotics because the parasites that are intended to be controlled with these products can develop resistance with prolonged use of these substances.

Vaccination against coccidiosis in chickens has an indirect effect on gut-related diseases (dysbacteriosis, necrotic enteritis, septicaemia after gut leakage) and the consumption of antibiotics could therefore be altered.

It has already been seen that the implementation of a coccidiosis vaccine (HIPRACOX®) in a rotation programme yields a significant improvement in zootechnical results (Ronsmans et al. 2015a). Hipra, in collaboration with the poultry practice Galluvet in Belgium (Ronsmans et al. 2015b), has conducted a study to determine whether vaccination with HIPRACOX® affected the use of antibiotics in broilers. The hypothesis was that if intestinal health was enhanced, the overall health of broiler farms would improve.

In the trial, the effect of the administration of HIPRACOX® on the use of antibiotics on 21 farms in Belgian field conditions was studied. The trial was conducted on the premise of the benefits of rotational programmes but we realised that the use of the vaccine could have a positive effect on reduced antibiotic use during the rearing period.

Some of the farms had a background of coccidiosis problems. Under these circumstances, the use of a coccidiosis vaccine offered adequate protection and there was a clear and significant reduction of treatments against coccidiosis in chickens. As we can see in Graphs 1 and 2, the number of days of treatment fell by 79.56% during the vaccination and by 51.38% after the vaccination cycles (see image above).

However, more significant still is the fall in the administration of gastrointestinal treatments during the period of use of HIPRACOX®. We evaluated the consumption of molecules used to improve intestinal pathologies (Tylvalosin, Linco-Spectin, Tylosin, Penicillin and Amoxicillin). 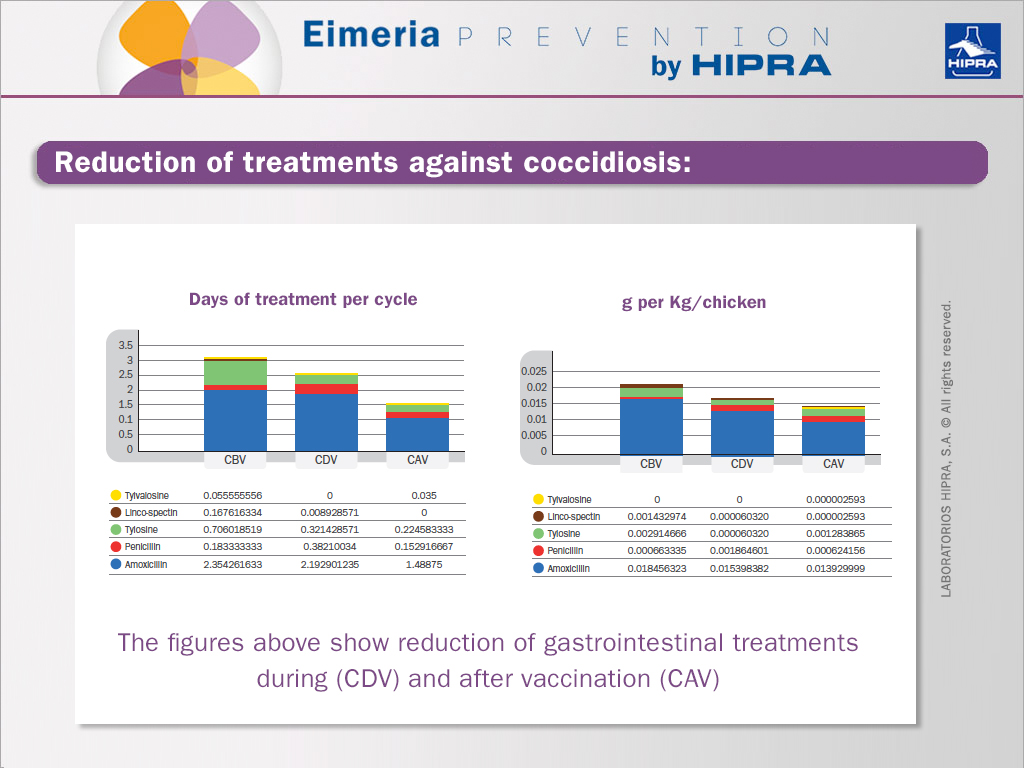 Popular belief tells us that more cases of necrotic enteritis and dysbacteriosis appear in vaccinated flocks due to the lack of the anticlostridial effect of the ionophores. However, no cases of necrotic enteritis were seen during the trial. Furthermore, the quantity of antibiotics used for enteric diseases fell in the period in which the vaccine was used. These observations are consistent with the review conducted by Williams (2005).

Once again, prevention in broiler production is key. A good vaccination programme including vaccines against coccidiosis in chickens could be the best option for those producers that are considering reducing or even phasing out the use of antibiotics on rearing broilers.

Can Eimeria vaccines replace anticoccidials for the prevention of coccidiosis in poultry farming?

Key points in the diagnosis of coccidiosis (Part 1: Identifying and counting oocysts)