Live Eimeria vaccines have been widely used in poultry for more than 50 years now and we already described the differences among each other in a previous post (Part I). Since the 80s, attempts to develop next-generation recombinant coccidiosis vaccines have led to the identification of several candidate antigens (Blake et al. 2017). In spite of this, no recombinant Eimeria vaccine has been brought to market so far. So has anything new come to market since the 1950’s?

The reality is that nothing more than classic live Eimeria vaccines has been developed since the 1950s when the first coccidiosis vaccine reached the market. At first glance, if we think about all the other vaccines that have been brought to market in the meantime – both viral and bacterial -, and given that recombinant vaccines have been available for almost a decade now, it seems that research in the field of Eimeria vaccines has failed to keep pace. 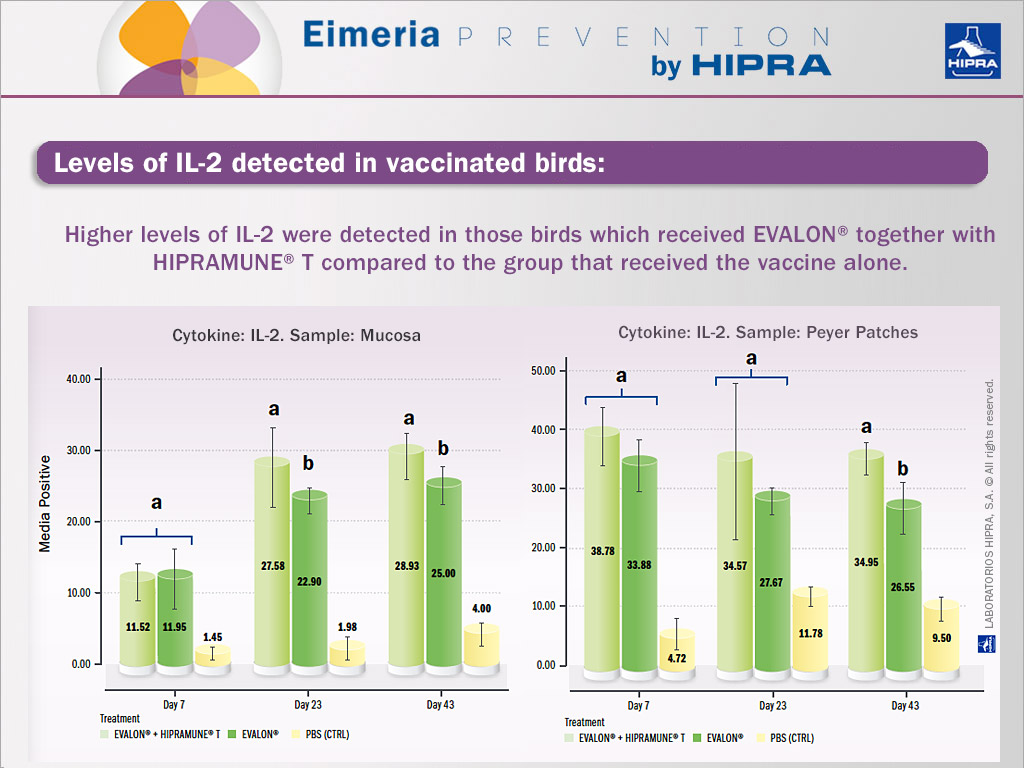 Of course, this is not true and there has recently been one important step forward in the field of coccidiosis vaccines. In fact, HIPRA was the first company in the world to introduce the concept of immunomodulation in a live vaccine and more specifically an Eimeria live vaccine: EVALON®. So why use an immunomodulator for a live coccidiosis vaccine?

The reason is very simple: in order to survive, the Eimeria parasite fights back. In fact, it has evasion mechanisms that are able to play with immunity and, in this way, it is able to elicit a type of immunity that is not protective and effective (Jang 2011, Schmid 2014, Miska 2013).

Using immunomodulation, we use an adjuvant that make the vaccine work better, as this adjuvant triggers the type of immunity (cell-mediated) that is important for a protective immune response against Eimeria.

Specifically, the action of the adjuvant used in EVALON®’s HIPRAMUNE®T leads the immune response towards more effective immune mechanisms: the Th1 and Th2 responses need to be balanced and this is what the immunomodulator does. Results obtained from experimental trials indicate that HIPRAMUNE®T is able to increase the level of Th1 cytokines, as indicated by the results obtained for IL-2. Regarding IFN-gamma, statistically significantly higher levels were detected on different days both in the mucosa and Peyer’s patches. In contrast, levels of IL-4 and IL-10 were equal or lower when the group receiving EVALON® plus HIPRAMUNE®T was compared to the group receiving EVALON® alone. These results confirm the ability of HIPRAMUNE®T to stimulate a cellular immune response. It is therefore hypothesized that EVALON®, when administered together with HIPRAMUNE®T, is able to polarize the immune response towards a Th1 response.

Moreover, we have seen that HIPRAMUNE®T’s immunomodulator is also able to balance the Th1 and Th2 responses throughout almost the whole of the birds’ lives. In fact, in the duration of immunity trial we saw protection for up to 60 weeks after vaccination.

Coccidiosis vaccines using live Eimeria parasites are surely an effective alternative to anticoccidials. They are able to elicit a robust protective immunity after ingestion and re-cycling of the vaccine oocysts in the litter. However, very often this re-cycling can be hindered by several factors: dry conditions of the litter, low densities or production facilities (e.g. aviary systems, slats, etc…). It is exactly under these ever-increasing circumstances that the presence of an immunomodulator is of paramount importance as it can drive the development of the immunity towards a cell-mediated one even when the correct replication of the vaccine cannot take place completely.

Anticoccidial Eimeria vaccines for poultry: where are we coming from and what is next? (Part I)