Anticoccidial Eimeria vaccines for poultry: where are we coming from and what is next? (Part I)

Eimeria vaccines have been widely used in poultry since the early 1950’s and their advantages have been clearly shown. In spite of this, there are some differences between them -attenuation, composition, administration route-, but they all consist of live parasites that need to undergo two and sometimes three entire life cycles inside the host gut in order to trigger the immune system and subsequently establish full protective immunity. 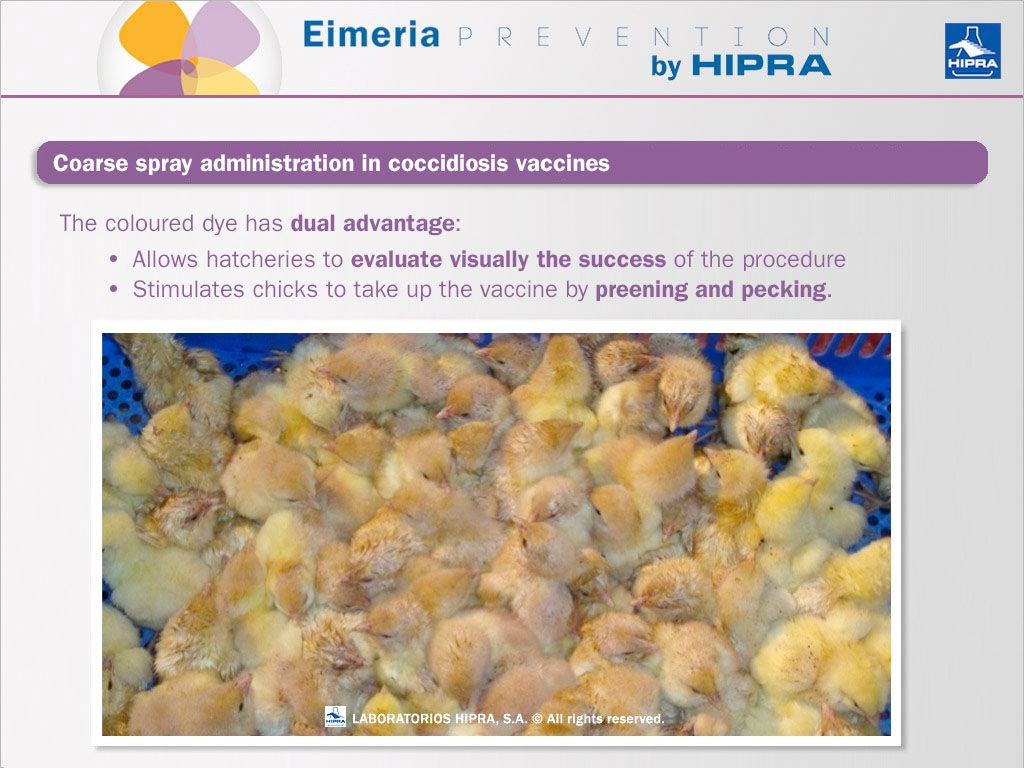 There are both live non-attenuated and attenuated Eimeria vaccines on the market. Live non-attenuated vaccines consist of parasites that still maintain their natural virulence. Control of the development of adverse reactions (coccidiosis disease) is achieved by using low numbers of oocysts in vaccine preparations and in some cases even by the use of anticoccidials to control the excessive spread of vaccine strains. This strategy of “controlled exposure” allows protective immunity to develop before the contamination of litter with non-attenuated oocysts becomes severe.

Live attenuated Eimeria vaccines are specifically designed to generate an immune response whilst limiting the threat of possible adverse events. The most widely used attenuation system is the selection of strains by precocious development (Jeffers 1975), although attenuation via passages on embryonated eggs has also been used in E. tenella for some commercial live attenuated vaccines. There can therefore be different grades of attenuation due to the use of different attenuation processes.

As regards the composition of the Eimeria vaccine, this depends mainly on the category of birds for which the vaccine has been developed: broilers or breeders and layers. In spite of this, the main core of any vaccine should contain at least Eimeria acervulina, E. maxima and E. tenella, as these are species affecting all the birds. E. mitis and E. praecox have very fast biological life cycles within the host and this is closely related to their effect in the first weeks of production cycles. Thus, the impact of these Eimeria species is relevant for broilers but very limited for breeders and layers. In fact, the growth rate and weight gain within the first weeks of life in breeders and layers is quite irrelevant and even later on (from 3-4 weeks) the weight is monitored and the feed administered is restricted.

On the other hand, in the case of long life cycle birds such as breeders and layers, it is necessary to include E. necatrix and E. brunetti in the composition of Eimeria vaccines.

In addition, two species of Eimeria – in the past considered as separate species – are no longer included by the scientific community in the list of Eimeria species affecting Gallus gallus:

However, both species are still present in a commercial vaccine registered on the American Continent.

Finally, regarding administration methods, a number of different ones have been developed for live Eimeria vaccines. The first ones included:

Raised without antibiotics: How to control coccidiosis in broilers and reach this goal? (Part 2)