Comparison between attenuated and non-attenuated Eimeria vaccines. What is the difference?

Most of the Eimeria vaccines available for chickens consist of live parasites that need to undergo two and sometimes three entire life cycles inside the host gut in order to trigger the immune system and subsequently establish a full protective immunity. 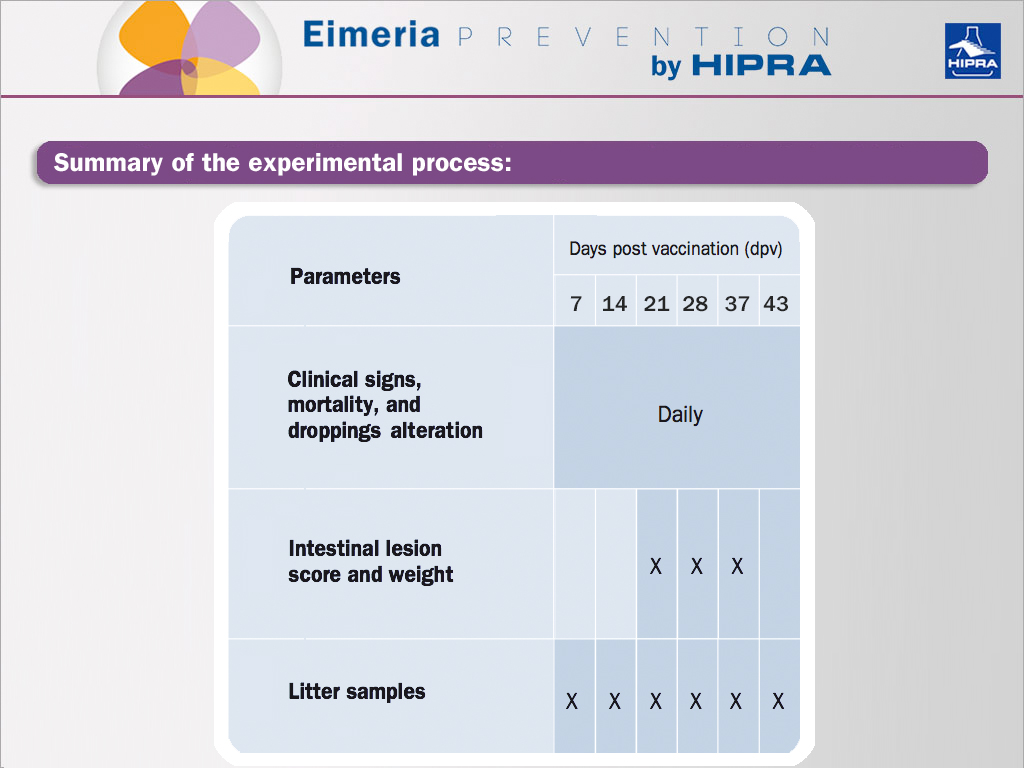 Control of the development of adverse reactions (coccidiosis disease) is achieved through the use of low numbers of oocysts in vaccine preparations and in some cases even by the use of anticoccidials to control the excessive spread of vaccine strains. Live attenuated vaccines are specifically designed to generate an immune response whilst limiting the threat of possible adverse events.

The most widely used attenuation system is the selection of strains by precocious development (1); although attenuation through passages on embryonated eggs has also been used in E.tenella for some commercial live attenuated vaccines. Therefore, there can be different degrees of attenuation due to the use of different attenuation processes. The aim of this study was to compare safety parameters of commercial non-attenuated and attenuated Eimeria vaccines with EVALON®, a live attenuated coccidiosis vaccine for breeders and layers.

One-day-old COBB chicks were purchased from a commercial supplier in Spain. The weight of the birds at one day of age was between 40 g and 50 g. The animals were housed in experimental Eimeria-free facilities and raised in floor-pens with wood shavings as litter; the litter was not changed during the entire length of the study.

Temperature and humidity were checked daily and maintained at an average of 25º-26ºC and over 50%, respectively. Feed and water were provided ad libitum. Commercial feed contained neither antimicrobials nor anticoccidial additives. The animals were divided into 5 groups (1-5) of 105 birds each, using weight as a stratification factor. Table 1 shows the study design and the parameters evaluated (see Table 1).

Changes in the faeces were sporadically observed in EVALON® group and group 4, whereas in groups 3 and 5 they occurred almost continuously from the second-third week post vaccination.

There were no statistically significant changes in body weight at any time during the entire study (Mann-Whitney U test; p<0.05); however, at 37 dpv, the weights of control group 1 and EVALON® group were the greatest. These results are consistent with what was expected with EVALON®; since it is an attenuated vaccine, its replication is very fast with a peak at 21 dpv, leaving the digestive tract clear so that animals can continue to grow without interferences linked to the vaccine strains (Figure 1). 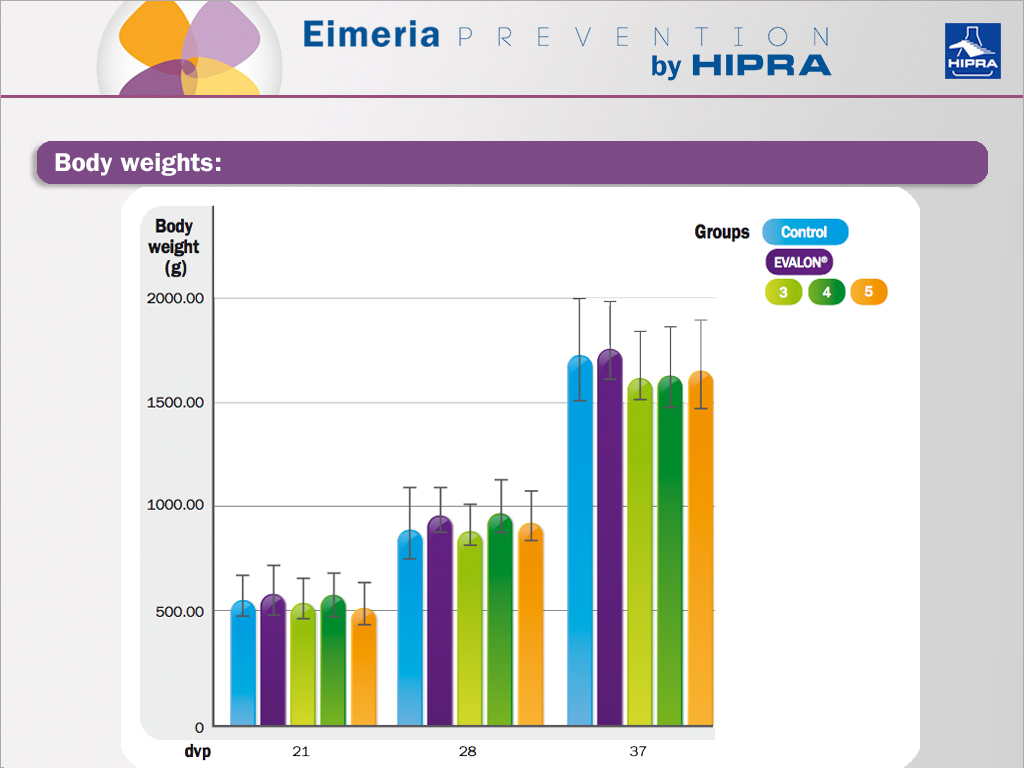 Figure 1. Body weights. Evaluated in dpv 21, 28 and 37. The values of each experimental group are presented as averages with standard deviation.

Throughout the study, EVALON® group did not show any statistically significant difference (Mann-Whitney U test; p<0.05) in average intestinal lesions compared to the control group (group 1). In contrast, statistically significant different average lesion scores (Mann-Whitney U test; p<0.05) were observed in different intestinal regions in groups 3 to 5 compared to the control group.

The Total Mean Lesion score is the sum of the average lesion values for the different intestinal tracts in a number of birds (20 in this study). 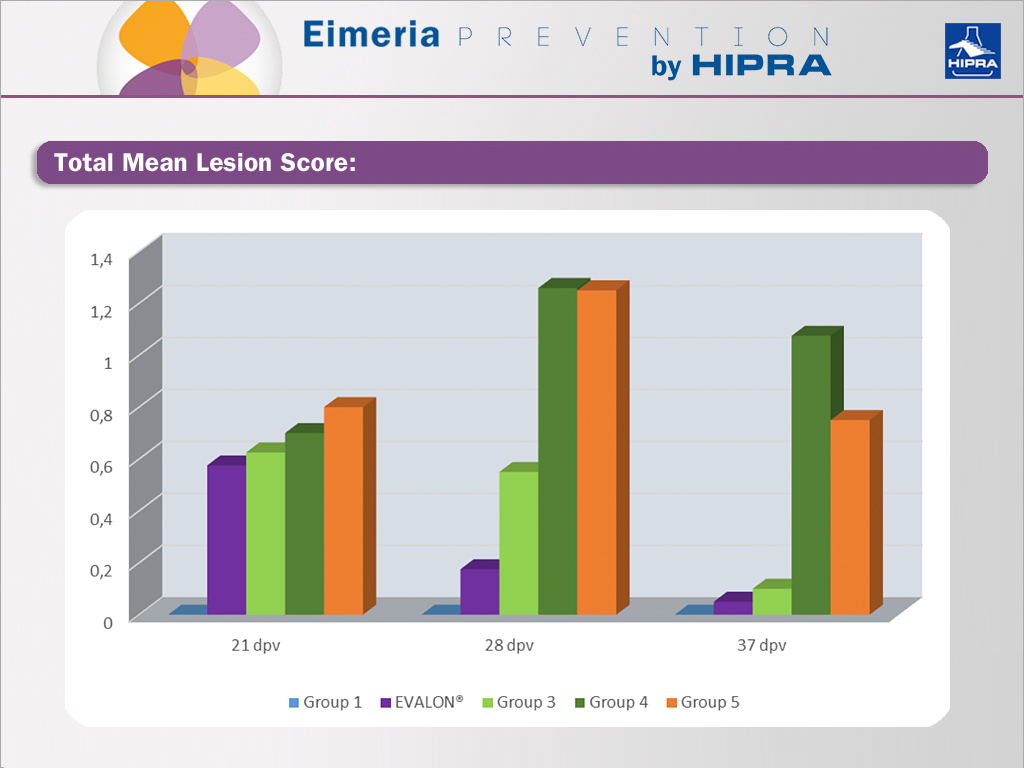 However, after day 7, both groups 3 and 5 showed a significant decrease in the oocysts per gram (OPG) in the litter and this may be due to the fact that, under experimental conditions, the densities of the birds are lower compared to field conditions and this may affect the proper distribution of the vaccinal oocysts.

The EVALON® group behaved as expected in terms of OPGs: since it is an attenuated vaccine, replication never reached such high levels as the non-attenuated vaccines (group 3 and 5) and, in addition, the profile of the OPG curve shows the peak of the first replication at 7 dpv, with a 2nd peak at 21 dpv which corresponds to the second replication, after which the birds develop immunity against coccidiosis. 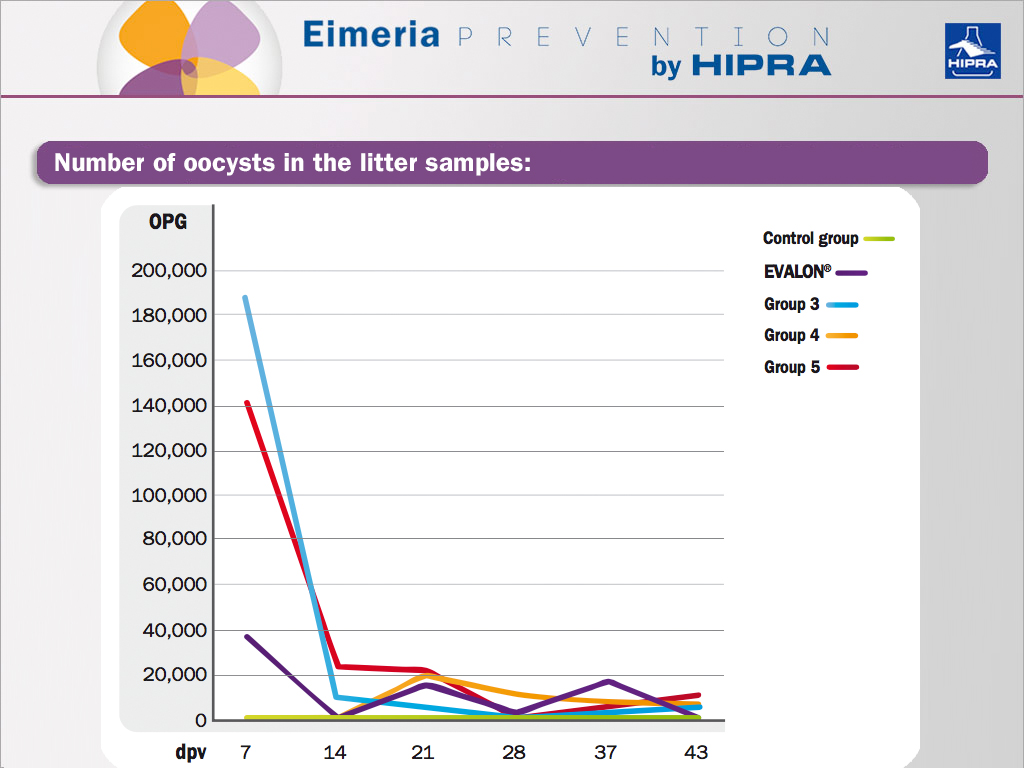 The results of this study show the presence of the following differences by product were shown in comparison with EVALON®:

In conclusion, the results of this study indicate that both attenuation itself and its degree may be important factors that must be taken into account when choosing live Eimeria vaccines; the lack of attenuation and low degree of attenuation may partly justify the deterioration of the health of vaccinated animals.

On the other hand, this study confirms the non-interference of EVALON® in the productive parameters, as well as the absence of impact in the birds’ intestine. In addition to the durable protection inferred by EVALON®, these factors put the birds in a better position to achieve the objectives of uniformity and weight during the rearing period.

What if a device for the administration of vaccines against coccidiosis in chickens were to offer even more?