After a spray vaccination in chickens, the uniform ingestion of the oocysts included in the coccidiosis vaccines is essential to get a good replication of the vaccinal strains within the gut of the birds, and the subsequent onset of immunity against the disease. But it is not only about uniformity, ingestion also has to take place soon after the vaccine is coarse sprayed over the chicks. In order to achieve this, it is very advisable to enhance the pecking and preening behaviour of the birds with the help of a colour and an aroma. 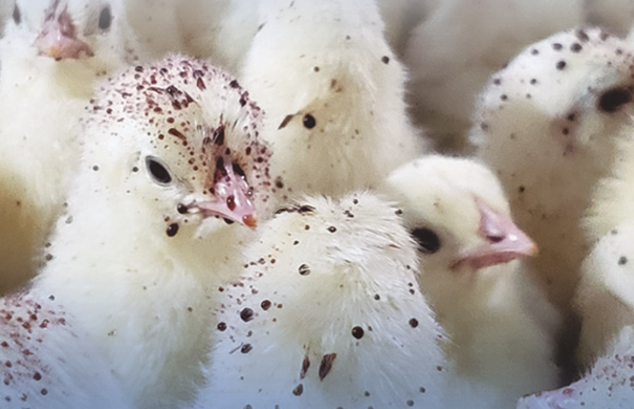 The application of vaccines via coarse spray was conceived mainly for the oral administration of coccidiosis vaccines made of sporulated oocysts. This type of vaccination requires a droplet size of more than 200 microns, which is achieved by controlling the type of nozzle and the pressure that are used.

For a good process of spray vaccination in chickens, the active ingestion of the vaccinal water droplets containing oocysts is crucial. It has been reported in the literature that the inclusion of colouring agents has a marked effect on coarse spray vaccination, inducing greater preening activity and thus increasing the ingestion of spray-applied vaccines.

The selection of the components to be associated with the HIPRA´s coccidiosis vaccines (EVALON® and EVANT®) by including in the vaccine solvent (HIPRAMUNE® T and HIPRACELL®, respectively), started by studying the work of other authors in which the colour preferences in young chicks had been described.

It has been reported that chicks have colour peak preferences in the orange-red and blue-violet regions.  However, blue-violet seems to be the colour spectrum of maximum preference of one day-old chicks and because of that, this was the colour spectrum selected. Due to the fact that blue-violet (a secondary colour) can be only achieved by mixing two primary colours, a red colour and a blue colour were chosen, giving a light purple as a result.

By the addition of the light purple coloration to the vaccinal solution containing the oocysts, under normal light conditions the birds easily detected the vaccinal droplets and thus homogeneity of the spray vaccination in chickens was improved.

Unfortunately, the conditions of light intensity in most hatcheries is very poor in the area were chicks are coarse spray vaccinated or in the area where the cages are piled up after the administration and stored before the transportation to the farm. Commonly, the light intensity in working conditions needs to be between 200 and 300 lux. However, the study of several hatcheries showed that where coarse spray oocyst vaccination takes place, light intensities varied from 100 to 200 lux, and was even lower in one (80 lux).

Because of this, the solvent for HIPRA´s coccidiosis vaccines was also selected for being the one that gave better results at a light intensity of less than 100 lux. Moreover, another component was introduced to the colouring agent to solve this problem: an aroma. It is interesting to mention that Burne et al. demonstrated that birds can respond to odorants and that they first use the visual stimulus and secondly they can use an odour stimulus.

For this reason, it was investigated the possibility of introducing an odorant into the final colouring agent in order to make it effective at poor light intensities as well. And HIPRA finally decided to include vanillin in the formula due to the fact that it increased the number of pecking events in conditions of poor light intensity (80lux).

In conclusion, the components selected to be included in the colouring agent for the spray vaccination of chickens against coccidiosis with HIPRA´s vaccines, EVALON® and EVANT®, are able to enhance the intake of the spray-applied vaccine in conditions of either normal or poor light intensities.

EVALON® and EVANT® are the only coccidiosis oocyst vaccines with a solvent, HIPRAMUNE® T and HIPRACELL®, including a dedicated colouring agent and an aroma which are able to enhance the intake of the vaccine even under poor light conditions.